Kevin Gordon – Poetry of the blues

With guitar and paper, he sat in an office at the publishing company Warner/Chappell, “in one of those little rooms where all those guys are trying to beat them out.” In 1993, he landed a publishing deal and wrote a few songs with Marty Brown. “It was probably my worst creative year ever,” he says. “You’re under that pressure: ‘OK, here’s your check for this month, what have you turned in?’ We had put an offer in on a house on the day I got the news that my deal was over. I just sat on the stoop of the duplex where we were staying and poured bourbon.”

The creative wall he’d hit in Nashville broke when he met Gwil Owen, one of the many scrappy, smart songwriters who orbit the Nashville mainstream. Together they worked on four of the best songs for what would become Gordon’s 1998 album Cadillac Jack’s #1 Son. “In one day we wrote ‘Dissatisfied’ and one more tune from the first record,” he remembers. “I realized it can work if you’re with someone who understands what you’re doing.”

E Street Band bassist Gary Tallent also seemed to understand. With Tallent hired to produce, Gordon cut Cadillac Jack — a loud, literate cycle of songs about his native Louisiana, rock ‘n’ roll thrills, and soul-killing disappointments — in Tallent’s Moon Dog studio in Nashville and then shopped it for a year.

But that’s not quite true. Along the way, his songs made it into the hands of Sonny Burgess, Scotty Moore, Keith Richards, Ronnie Hawkins, and Billy Bob Thornton (among others), all of whom recorded them. “It pretty much happened without my persuasive skills,” he says. “I’m not one of those people calling managers and shit and saying, ‘I have a great song for so-and-so.'”

Cadillac Jack finally found a home on Shanachie, a folk label with a solid track record. Gordon issued a follow-up, Down To The Well, in 1999. The album featured Lucinda Williams on the title track and production credits from Bo Ramsey and Gordon’s now steady guitarist McMahan. Down To The Well was one of the finest albums of its decade — muscular when it rocked, aching when it slipped deep into the south, well-crafted but instantly alive.

Gordon toured that album hard, perhaps too hard. “I toured as much as I was able, but less than the label wanted,” he says. “I had already gotten a second mortgage for expenses. I couldn’t be a mercenary touring artist like I had been. My kids were born in ’97 and ’98. I guess I pulled back some; I don’t know if that was the right thing to do or not.”

As he pulled back from the road, Gordon threw himself into the world of contemporary folk art. He began working in a local gallery and taking trips to visit the artists, hear their stories, and learn about their work. “I figured out if I was going to buy this stuff, I have to be able to afford to do it,” he says. “It was becoming an unhealthy obsession. That’s when I decided to start selling it. It’s not really connected to me and my self, but I believe in the work.”

His modest house in East Nashville barely has the space to hold his collection (which can be viewed by appointment or at his website, www.gordongallery.net). Pieces by Jimmie Lee Sudduth, Willie Dawson, Chuckie Williams, David Butler, Howard Finster, and Curtis Young cover the walls or are stacked in corners. He points to one of his favorite paintings, by Mary T. Smith of Hazelhurst, Mississippi: totemic figures in coarse black raise their arms in praise or protest from a field of green.

“Along the side of the Highway 51, the main drag, in ’75 or ’77, she started making these signs and putting them in her yard,” Gordon explains. “She painted figures on pieces of tin over acre-wide pieces of ground. Why did this happen? Why did she do it? It’s interesting to watch her progress. There’s an earnestness about it all that’s incredibly appealing to me. It raises questions about creative process, why people do what they do with what they have at hand.”

Gordon dedicated O Come Look At The Burning to these vernacular artists, though he hesitates to draw parallels between his work and theirs. “The art has changed the music and I can’t articulate how,” he says. “I went to school for poetry, so I have this trained language thing, but on guitar I’m essentially self-taught. There’s this odd ‘I don’t know what I’m doing but it feels good’ [sense], combined with being attracted to language, paying attention to language.”

The language of O Come Look At The Burning is dirty and beautiful blues; it’s rock ‘n’ roll made in the moment and outside of all concerns except what might leap from fingers and mouths and hearts given over to spontaneous performance. Gordon cut it live in McMahan’s rented house, a maze of vintage gear and tiny rooms, each with their own sonic character. The songs draw inspiration from schoolgirls headed home in the summer, an artist named Joe Light who finds God in prison, a roadside wooden cross wrapped in flowers, a college roommate drunk on memories and a Janis Joplin album, and a bracelet made of guitar strings and diamonds.

The songs also return again and again to one individual’s attempt to find his way, to find a cure without compromise. On an Eddie Hinton cover, he finds it by way of “Something Heavy”; on “Make It Good”, he simply surrenders to the “shaking ‘tween the here and now.” That search, not just for meaning but for purpose, remains the one constant in Gordon’s life and art.

“I’m in an ongoing battle-slash-embrace with the higher power,” Gordon acknowledges. “For a while in college, my mom and stepdad were living in Crowville, southeast of Monroe. They were going to a country church. I was encouraged to go, and I would occasionally. It scared the shit out of me. People were falling out on the floor. It was overwhelming. These people are not acting. They really believe it’s happening. But along with that, I wondered: Why am I not feeling this way? Do I want this guy to touch me on the forehead? Will I fall over?

“Songs happen like that. I’ll have this recurring memory. It’s like a movie. You find your way into it.” 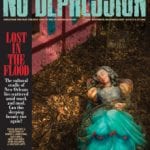