Keith Richards’s Coda: A Folk Hero Caps off His Legacy

With an icon like Keith Richards, who has not only lived up to the rock and roll ethos of rebellion, unbridled sexuality, and hard-living–but was so wild he was instrumental to fashioning our modern folk hero of the rock star–it’s amazing enough he is still alive in 2011. But when a myth looms much larger than any of the man’s guitar licks, albums, or legendary substance addictions, how could he possibly enrich the story through an autobiography? Apparently by using a large dose of corrosive British wit, tightly crafted prose, and the guiding hand of writer James Fox. Richards’s (and Fox’s) Life reads as if you had the rare pleasure of taking Mr. Richards out to the dirtiest dive bar you could find, gave him an open tab, and just said, “Alright, go.” And he goes…for a long time, producing the most unpredictably wild and entertaining 500-plus pages I’ve encountered in a while.

“For many years I slept, on average, twice a week,” he states with his usual modesty. “This means that I have been conscious for at least three lifetimes.” It’s hard to say whether this is hyperbolic or not. Regardless, this man has lived a long life, and everything is a potential subject in this book: the countless squabbles with Mick, his development as a musician, the dirt on nearly every legendary rock icon, his heroin addiction, kicking heroin, starting heroin again, etc. If you want merely a brief introduction to the Stones, you should go to Wikipedia rather than buying this book. But if you’re even remotely interested in the band, the history of rock and roll, or even if you just want to listen to a fascinating guy for several hours, it’s a delight.

Keith, being the generous man that he is, provides the reader the pleasure of vicariously reliving his life as the quintessential rock star. It’s a guilty pleasure of the finest order. You’re allowed to be his partner-in-crime, doing all the things you’re mother raised you not to do, without any of the pesky consequences. To give you a glimpse: the book opens with the Stones being pulled over in 1975 in a small Arkansas town; the convertible is loaded with marijuana, cocaine, and heroin. The cops are looking to get famous for nailing the Rolling Stones, who happen to be public enemy number one for the family values crowd at the time. While waiting for the judge, the band flushes as many of the drugs down the toilet as they can.  When the presiding judge comes in from the golf course, he’s well well-past drunk and awaits his assistant’s return to the court with more bourbon.  It already sounds like a verse from Bob Dylan’s “Desolation Row,” and this is just twenty pages into the book.
On the most immediate level, Richards provides as a compendium of priceless stories about pop culture icons. What is a strange experience for the average person seems quite commonplace for Richards. Buried in the middle of one paragraph as if it is of no consequence, Richards tells of a strange encounter with Marlon Brando–who our favorite 60s rock and roll heroes grew up learning from as he swaggered across the screen–writing  that Brando “kidnapped [Anita Pallenberg] one night read her poetry and, when that failed, tried to seduce Anita and me together.” So what does Mr. Richards have to say about this bizarre event? “Later pal,” and that’s it. Now he’s telling you a different story—he’s talking about writing his first song while locked in the kitchen with Mick, having an affair with Ronnie Bennett of the Ronettes behind the back of notoriously jealous (now imprisoned) Phil Spector, meeting Muddy Waters for the first time at Chess Records, or one of his LSD-induced road trips with John Lennon. It’s as if he has so many stories, he feels strained having to cram them into 547 pages.

However, the book is not merely an endless string of rock and roll antics. Although he may be setting the bathroom on fire at the Playboy Mansion on one page, before long he’ll be giving brief lectures about the history of recorded music or the benefits for songwriters who work with open-G tuning. He even provides thoughtful cultural analysis on several occasions, like this passage concerning teenage girls at the early concerts:

“They nearly killed me. I was never more in fear for my life than I was from teenage girls. The ones that choked me, tore me to shreds, if you got you got caught in a frenzied crowd of them…[That] killer wave of lust and desire, or whatever it is—it’s unknown even to them. The cops are running away, and you’re faced with this savagery of unleashed emotions.”
This is not typical rock biography material. Keith Richards is doing a little sociology here, in the least pretentious way imaginable. You can only get vivid analysis of cultural phenomena like this from someone on the inside. Insights akin to this are sprinkled throughout the autobiography, no small feat for a rock and roll star, regardless of James Fox’s help writing the book. 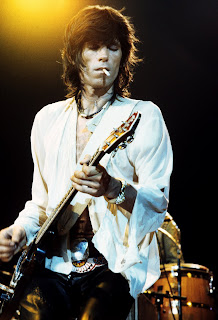 It’s not just the size of his personality, but also his awareness of the myth surrounding him that makes Richards’s Life worth reading. An autobiography is bound to be a performance, and this monologue, full of digressions and Richards’s wizened bits of practical advice, is a particularly powerful one. He allows the reader inside the persona without it collapsing—a persona he describes in the following way: “There’s a demon in me, and there’s a demon in everybody else…People love that image. They wish me to do things that they can’t. They’ve got to do this job, they’ve got this life, they’re an insurance salesman…but at the same time, inside of them is a raging Keith Richards.” In Life, not only do we get to ride shotgun on all of Keith’s exploits, we also get to see somebody whose job it is to play that role. He not only recounts his various difficulties while playing the part, he adds layers to it as well, complimenting his unassailable place in the modern mythos as raging Richards with the persona of aging artist, ruminating over a life nearly spent. The resulting book enriches Richards’s already impressive catalog of work by adding a measure of reflexivity to his rebellious personality.
Life by Keith Richards, James Fox
Little, Brown and Company
ISBN: 031603438X
576 Pages
ORIGINALLY PUBLISHED AT http://amissingamerica.blogspot.com/2011/04/keith-richardss-coda.html
Matt Shedd is a Featured Contributor at No Depression, freelance writer, and Graduate Teaching Fellow at University of Oregon.