KCRW held a little soiree last night to celebrate its Top 10 list for 2016. The Los Angeles music tastemakers (and almost everyone I know’s favorite radio station and all day companion) got a jump on the end of the year list making, unveiling their top picks before we’re even to December … and I bet most others will follow their choices pretty closely, as all are excellent.

The party was held at legendary producer Bob Clearmountain’s Apogee Studios in Santa Monica, where KCRW often holds intimate live music showcases as well. The place is fairly small, so the place was packed with loyal listeners wanting to compare our lists. Whiskey drinks were served, and KCRW logo cookies were also on offer. As it was basically standing room only, things got under way quickly and moved along at a good pace. Morning Becomes Eclectic DJ, Jason Bentley, got the proceedings underway (in some very stylish pants), welcoming everyone and explaining the process. Each station DJ comes up with their own Top 10 list, then the results are complied into the master list. With so many losses in the music world this year, the evening felt especially poignant. I choked up more than once. 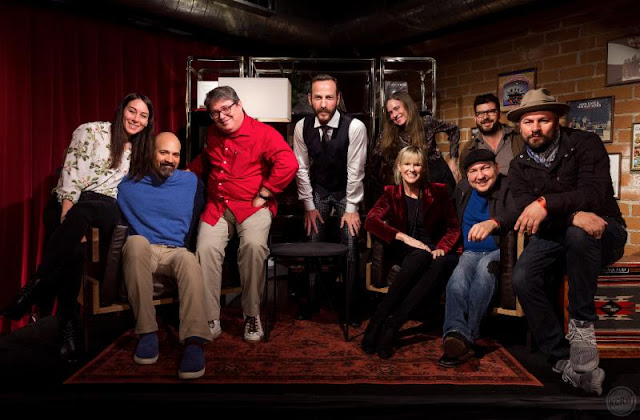 A rep allegedly from the accounting firm of Deloitte comically brought up the sealed and numbered envelopes, and then Bentley brought up DJ Marion Hodges to unveil the number ten spot. #10 was A Seat At The Table from Solange. Hodges cracked everyone up saying, “Solange has her hands in a lot of fires … wait, that’s not a saying.” but her point was made. Solange had a lot going on this year, music supervising shows like HBO’s Insecure as well as releasing this really great piece of work. Hodges chose the track “Don’t Touch My Hair” to play for us, and it was immediately clear both how good the album is and how incredible the sound system at Apogee Studios is. Wow.

DJ Dan Wilcox came up next (with his beer) to reveal #9 – Autolux’s PUSSY’S DEAD. Wilcox said that it might be #9, but it was #1 as far as most awkward title to say on the radio – but that it’s gotten easier since the election – sigh. This one is a ROCK album, that Wilcox said is the first one to really live up to the live show put on by Autolux. He chose the track, “Hamster Suite” to play, which really showcased the work of who Wilcox says is the best drummer in rock today, Carla Azar. I immediately added it to my list of year end must haves. Rock.

#8 was introduced by DJ Liza Richardson, and it was Bon Iver’s 22, A Million. Richardson joked that this envelope should really have been opened by Wilcox, as he’s obsessed AND hails from the same town as Bon Iver, Eau Claire, Wisconsin. “It’s so different from everything else right now. It’s hip hop meets folk, with really interesting samples, like Paulo Nutini,” explained Richardson. She chose “33 God” to play, and it was deep, starting out with a beautiful treated piano that took you right into that Bon Iver world … and made you want to go stay at the Ace Hotel.

DJ Eric J. Lawrence took the stage in a bright red holiday shirt to let us in on what was in the #7 spot … but as he is the “Alternative to the Alternative” former music librarian for the station, he had his own choice first, and it was Future Of The Left’s The Peace And Truth Of Future Of The Left. He did not have a track to play of that one, so we’ll have to research that, but the real spot here went to Radiohead’s A Moon Shaped Pool. This one was, of course, on my list as well, and had to agree with Lawrence when he said that they are the “Pink Floyd of our time.” He played the opening track, “Burn The Witch”. “It’s a bit of a downer, Folks,” said Lawrence by way of introduction … but a pretty awesome downer, for sure.

#6 honors went to the newest KCRW DJ, Karene Daniel, and to Andy Shauf’s The Party. This one I had never heard of, so it was good to get turned on to something new that I’ve clearly slept on. Shauf basically narrates a late night party throughout the album, and Daniel played the track, “To You”. It’s kind of a love confession that Daniel said was “Soft, tender, rare, and beautifully honest.” I concur.

The resident DJ for the night was Raul Campos, and he left his post to disclose the #5 choice. He asked as he ripped open the envelope, “Is it gonna be a Latin Alternative album?” Bentley drily replied, “I doubt it”, which got a laugh, though it was sadly true. Instead it was Wilco’s Schmilco. Campos called it “An album from the heart”, and named Jeff Tweedy as one of the best songwriters of our time. “If I Ever Was A Child” was the chosen song, and the first time I choked up. I don’t know why really, it just touched me. It might have been the incredible sound in there. It felt extra intimate and sweet and simply moving. Another one that was on my own list of 2016 faves.

DJs Garth Trinidad and Jeremy Sole shared duties for #4 (and it was cool to see what they look like, though Trinidad had a Movember thing going on, so I’ll need to see him again. I think Sole’s abundant facial hair is an always thing), and the honors went to A Tribe Called Quest’s We Got It From Here … Thank You 4 Your Service. This was my #1. I laughed when Trinidad said it was HIS #1 before he even heard it. He called it a “Legacy record”, and it truly is. Sole added, “They didn’t have to think outside the box, ’cause there is no box. The best thing about their new album is that it’s an old album.” Exactly. I didn’t realize that they went into the studio to begin recording the album on the night of the Paris shootings last year. Heavy. You feel it. They spun bits of “We The People” and “Solid Wall Of Sound” and I think everyone agreed with Trinidad when he said, “I’d gladly give up the talking to listen to the whole record” after Bentley cut it off to chat. Plus it sounded EXTRA great inside those Apogee walls. Incredible, really.

One of my favorite KCRW DJ’s came on to present #3, Anne Litt. Her voice is very soothing to me, and she again nearly reduced me to tears (OK, she did) when she revealed that #3 was David Bowie’s Black Star. Losing Bowie earlier this year was a big deal to everyone, but it clearly meant a lot to Litt, who had even brought along her vinyl copy of Black Star. She said that she learned of Bowie’s passing when Wilcox was playing a whole bunch of Bowie songs in a row last January, making her go “WTF?!”, and then learning the news. “This album is focused in a way that maybe only a dying man can be,” Litt mused, adding that she thought he was back in a way that she hadn’t heard before. “I Can’t Give Everything Away” played, and as Bowie’s voice floated over us posthumously, well, I was choking back tears again. It was the last song on a final record, and fairly obviously set up as a farewell. This album is not on the list because Bowie died. It’s there because it’s great. (Oh, for the record, Litt’s personal #1 choice was the Hamilton soundtrack!)

#2 was given to DJ Travis Holcombe to reveal, and it went to Kaytranada for 99.9%. This was another one I’ve slept on, so was surprised to hear that this one was the #1 choice for Bentley. We were told it was great as an album, or as all singles. I think I’ve heard like one on KCRW, so this will warrant further listening from me. They played the track “Bullets” (with guest spot from Little Dragons), which Bentley commented was a really cool groove for a really heavy subject (gun violence). Holcombe admitted to that being lost on him, and Bentley asked if he’d listened to the lyrics. “I haven’t. I’m more of a beats guy, lyrics are low on my list.” OK. Then I imagine his own #1 choice of La Femme’s Mystere must contain some pretty phat beats.

DJ Anthony Valadez got to reveal the #1 album for 2016 … after a room full of people rolled their tongues as a drumroll … it was Anderson.Paak’s Malibu! This was appropriate as I first heard of Paak on an MBE studio session, and ever since he’s been pretty much everywhere, on every album, of everyone. Paak could not be in attendance so Valadez and Bentley shlepped out to Highland Park to record a video of Paak’s receiving the news. A clearly happily hyped Paak shouted, “Tight! I’ve always wanted to do an acceptance speech via satellite! Thank you! Yes, Lord!”

And there you have it! The Top Ten Albums of 2016 according to KCRW! Campos spun on as the party continued there at Apogee Studios. 2016 has been a brutal year in so many ways, that it was actually lovely and touching to focus on the good things like music that enrich our lives every day, and realize that it hasn’t been all bad. In fact, a lot of it has been absolutely wonderful. Thank you to KCRW and Apogee Studios for having us, and for exposing us all to the best music in the world every single day. We’re already looking forward to next year. Really, really forward.

Cheers to all the winners, and thank you to them too. Your art matters. Really, really matters. 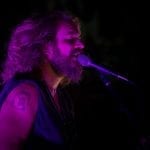 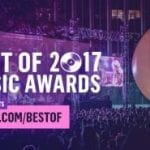