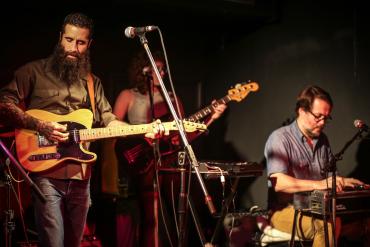 The Jericho Tavern in the English university town of Oxford is a storied kind of place. To the clinking of pint glasses, Radiohead played their first gig there (as On A  Friday), and Supergrass got signed immediately after their set. In mid-November, the pub was more like a honky-tonk you would find in Nashville than an English drinking hole.

The visiting artist was JP Harris, the outlaw-country singer whose new album Sometimes Dogs Bark At Nothing is reviewed here. He is a charismatic man, with beautifully clipped hair, tattoos aplenty, and a beard that frankly would make ZZ Top jealous. His aw-shucks-which-country-am-I-in patter was charming too.

But best was the sheer power of his singing and playing. The small audience was ecstatic, responding with far more vigor than a bigger crowd might have. Music in British pubs can sometimes be ruined by people just chatting as they down their beer. Not at this gig; all were rapt.

Harris played a lot of songs from his new album. He apologized for this, but many of the people in the audience probably weren’t familiar with his old songs anyway. Standout songs were “When I Quit Drinking,” with its pure country response “I start thinking about starting up again,” and a wonderful cover of Waylon Jennings’ “Lonely, On’ry and Mean.”

Another cover — “It’s a Long Way to the Top (If You Wanna Rock ‘n’ Roll) — was particularly fine, if somewhat too apt. There were only about 6o people listening to the gig and it was hard to imagine the financial advantage of traveling through Britain, the Netherlands, Germany, and Norway. It must be love — and hope — but it was well worth it for those listening.

I must also add a postscript about the warm-up act, Miss Tess and Thomas Bryan Eaton. They both played behind Harris (bass and slide, respectively), but their two-guitar set beforehand was splendid. Country meets jazz-a-billy. I would have been happy to have my pint just listening to them alone. JP Harris was the cream on top.