John Prine – To believe in this living

I’m floating through an outmoded Chicago newspaper database that gets used these days about as frequently as rotary phones, looking for bits and pieces about one of the Windy City’s favorite singing and songwriting sons. The keywords “John Prine” bring up the expected reviews and articles, some co-billing him with his dear buddy Steve Goodman, as in “Prine, Goodman Battle Show Biz Tradition” from July 20, 1978. There are featurey parsings of personality like “Behind Prine’s Woes Lurks Lot Of Humor” (from the same week), and articles you would pursue if you thought they lived up to their promise, like “Why Is John Prine Singing?”, a Chicago Tribune query from January 21, 1979.

And then, interspersed among the links, are a number of seamy tabloid headlines, including “2 Hurt In Fire, Mother Charged” and “Bond Set In Murder, Arson Plot” and “Cabdriver, 18, Shot To Death.” Why they come up is of less interest than what they evoke. Prine may be the guy who wrote “It’s A Big Old Goofy World”, but as anyone who has spent any time with his songs knows, mundane violence, mainly emotional but sometimes physical, seeps through them. He’s an intrepid reporter on silent sufferers who have been cut out of life’s rewards, who can’t fit in, who are neglected by fathers and mothers and Big Brother, who don’t have that fifth season to explain the other four.

Sometimes, the violence is front and center. “Lake Marie”, one of Prine’s masterpieces, was inspired in part by a series of grisly murders he remembers the Chicago news media having a field day with when he was a kid. “Saw it on the news, on the TV news in a black and white video,” he sings. “You know what blood looks like in a black and white video? Shadows. Shadows, that’s exactly what it looks like.” And that’s what it sounds like when the Vietnam veteran in “Sam Stone” shoots all that money in his arm, or when the kid with two first names in “Six O’Clock News” ends up with his brains on the sidewalk.

“I felt I had to tell funny stories before I went into those songs, just to, you know, let up on the crowd,” says Prine, reflecting on his early days of performing. “I thought they were so sad or something, that they were in such a miserable place. That’s why I came up with some of the humorous songs, too, just so I could get back to the sad ones.”

None of this is to say it isn’t a big old goofy world. On a sunshiny March day in Nashville, where Prine has lived for 25 years, it was Meat Loaf Friday, meaning Prine’s favorite food was one of the specials at a local eatery. Yesterday, somewhere else, was Meat Loaf Thursday. He keeps track of where there’s a meat loaf special every day of the week. Sad to report, the place he went to on Meat Loaf Tuesday closed up shop recently, but hey, it’s a big town. Unlike Los Angeles, Nashville may not have a restaurant that serves potatoes eleven different ways — have I mentioned he’s also big on spuds? But it does know how to fry. Everything.

Prine moved here in 1980, after his first marriage ran aground. His career was in a serious rut, and he was on the verge of a permanent split from the major labels. Perched on a chair in the office of his longtime business partner, Al Bunetta, in the modest Music Row headquarters of Oh Boy, the independent label of which he is “nighttime president,” Prine was in a low-key mode. Could be he was saving up energy for his dinner-hour assignment: taking his kids, who are 9 and 10, to Vin Diesel’s The Pacifier.

Fatherhood dropped in on him after he married his third wife, Fiona, whom he met during a trip to Dublin, where she was the business manager of a recording studio. They conducted a long-distance romance over five years before getting hitched (they planned to celebrate their anniversary by attending a Bob Dylan/Merle Haggard concert in Chicago). She and her son moved to Nashville. The Prines spend as much time as they can on the old sod, in a small cottage they bought on Ireland’s west coast, near Galway.

“It all happened at a great time,” Prine said. “I was 49 when the first kid came along. It just, like, keeps me off the street, that’s for sure. It also makes it legitimate for me to go to toy stores. Used to be, I could never buy anything because I had no one to buy anything for.

“I don’t know if I would have appreciated it as much in another time of my life. The stuff I thought was interesting and all the stuff I did, all the partying I did — I would have hated to miss it being with my kids. It used to be all I’d do was sleep late, walk around and think about ideas for songs. Now, I’ve got a family, a wife, a whole thing going on. I have to put aside time to write.”

The originals on Fair & Square, Prine’s first album of new material in nearly a decade (released April 26 on Oh Boy), were written over a period of five years. That’s quite a different pace from early in his career, when he turned out four albums in a little more than four years for Atlantic, having signed to deliver an impossible ten in ten. (“They were looking for publishing,” he says. “Whether anyone was gonna become a James Taylor or not, they were getting in on it somehow.”)

If the early songs that stopped people in their seats with their quick-cutting insight and genius turns of phrase had a certain airtight quality, his new efforts have a more relaxed, ruminative quality. On the sunset-streaked “Taking A Walk”, which boasts radiant harmony vocals by Mindy Smith and Pat McLaughlin, and the infectious, easy-rolling opener, “Glory Of True Love”, Prine brings a graceful, dyed-in-the-bone wisdom to themes of love, loss and dislocation. There’s resignation in the songs (which include a cover of Texas legend Blaze Foley’s “Clay Pigeons”), but no small amount of resolve: “Radio’s on/Windows rolled up/And my mind’s rolled down,” he sings on “Long Monday”, written with one of his longtime cronies, Keith Sykes. “Headlights shining/Like silver moons/Rollin’ on the ground.” 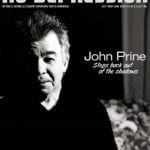