So, you’re a blues aficionado, which means you’re a fan of Big Bill Broonzy’s “Key to the Highway”. Or maybe you prefer folk, in which case you’ll love Woody Guthrie’s “Oklahoma Hills” and Bob Dylan’s “Not Dark Yet”. Or possibly you’re a lover of the classic Motown Sound, so “Walk Away Renée” really captures your imagination. Perhaps at heart you’re really a rock and roller, so Bill Neely’s “Rock ‘n Roll Baby” pushes all the right buttons. You love live music and love nothing more than getting in to the groove and dancing to a song like “Tulsa Time” at the end of an evening’s performance.

If you identify with any of the above, then you would have adored being in the audience for Jimmy LaFave’s appearance at London’s Bush Hall, where he was accompanied by a four-piece band that clearly delights in live performance. John Inmon on guitar, Radoslav Lorković on piano and accordion, Glenn Schuetz on bass, and Bobby Kallus on drums made up the Night Tribe. The pleasure they all receive from putting on a show was apparent to all.

Inmon’s extended passage in the ten-minute version of Dylan’s “Just Like A Woman” brought gasps of wonder from the crowd and Lorković drew on his classical training for the intro to “Deep South 61 Delta Highway Blues”. The combination of classical overtones with bluesy rock worked really well and prompted someone to shout out “bloody marvellous” at the song’s conclusion. No one in the audience disagreed with that! LaFave is the most generous of bandleaders and gives his musicians plenty of artistic freedom. This indicates both self-confidence and respect for the abilities of the people he surrounds himself with.

LaFave is regarded in his own right as a leading proponent of the “red dirt music sound”, and is one of the most highly respected singer-songwriters in the states of Oklahoma and Texas, who have given birth to some of America’s best music. LaFave’s distinctive vocals are the centerpiece of his live and recorded material, and they shine never more brightly than on his own compositions, such as the tender “Only One Angel” and gentle “Never Is a Moment” — both of which were in tonight’s set list. These quieter moments were balanced with louder upbeat material; 11 of the 17 songs performed were covers, but he has a knack of making them his own.

Jackson Browne’s “These Days” was a reminder that the record label La Fave fronts – Music Road Records – has put out a Browne tribute titled Looking Into You — a two-disc set featuring 23 tracks, which has served to highlight Browne’s extensive catalogue. On that compilation, LaFave covers “For Everyman”, the title track of Browne’s 1973 album.

Amongst the enthusiastic London crowd were visitors from the US who were out in support of their fellow countryman – he has a very loyal and dedicated fan base. LaFave has played London before and each occasion sees the audience numbers swell. Tonight, standing ovations and enthusiastic applause brought him back for two encores. With people dancing in the aisles to the closer “Tulsa Time”, it seemed that no one really wanted the show to end. 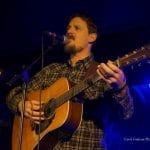