Oxford, UK –  Mark Crozer has been busy the last few years with a variety of long awaited projects – all of which have just been released or are set to drop in 2011.  Mark Crozer appears on the latest studio track (thus far) “All Things Must Pass”, recorded with The Jesus And Mary Chain – appears on “Upside Down: The Best Of The Jesus And Mary Chain” (Demon/Rhino) – released in November 2010. Along with his membership in The Mary Chain, Mark will release his first solo recordings in eight years – with the three track DIGITAL DOWNLOAD EP “There Is No Love” due out February 14, 2011 via Planting Seeds Records.  Label executive William Hickey proclaims its  “A fine blend of classic melodic pop with “Darklands” era Jesus And Mary Chain atmospheres sprinkled in.”   The EP was produced by Crozer and Mixed Jay Braun (Jon Spencer Blues Explosion, Fiery Furnaces, Cat Power etc) and Mastered by Warren Russell-Smith (Rolling Stones, Tim Buckley, John Phillips etc).  The single also features “To Get To You”and “A Night Like This”.

Mark Crozer has also digitally re-issued his first two solo LPs “Shining Down On Me” and “Unnatural World” (released December 2010).  If that wasn’t enough, Mark is also part of Oxford supergroup International Jetsetters who will follow up their 2008 debut EP “Heart Is Black” with another fine EP, titled “California” – out March 2011.

Along with performing, Mark has shown a hand in booking, producing, engineering, teaching, and a slew of music industry related positions.  His time with Coolbrook booking agency later led him to become bass player in The Jesus and Mary Chain’s Jim Reid solo backing band. With Jim, Mark toured the UK and Europe, and recorded the single “Dead End Kids” (Transistor, UK) and a version of The Beatles’ “And Your Bird Can Sing” for Mojo magazine (UK).

When The Jesus and Mary Chain reformed in 2007, Mark was asked to play rhythm guitar. His first show with the band was at The Glasshouse in Pomona, CA –  a low-key warm-up set, before the Coachella festival in Indio, California, where the band was famously joined onstage by Hollywood actress Scarlett Johansson, who filled the role of backing vocalist.

You can bet the future holds even more great projects for singer/songwriter Mark Crozer.  A full length album is currently being mixed and mastered due out later this year along with plans for US live dates. 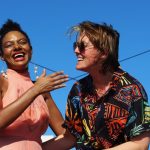