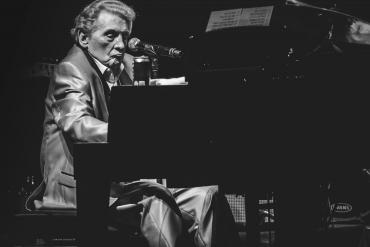 Jerry Lee Lewis knows he is going straight to hell. So he plays. And he stays alive.

Jerry Lee Lewis is a self-proclaimed stylist. According to the Killer himself, there are only four original American voices: Al Jolson, Jimmie Rodgers, Hank Williams – and Jerry Lee Lewis.

He may be right.

The Theater at Ace Hotel in downtown Los Angeles was filled with the faithful: baby boomers, millennial hipsters, rockabilly dolls and cats, old-timers, first-timers – congregating the day after Thanksgiving to bear witness to the unlikeliest of survivors unleashing the brute force of American music in a way that has no remaining peer in this earthly world. They came, they witnessed, they gave thanks, and they were rewarded in spades.

In a mere ten songs, the Killer managed to take the enthusiastic audience through the varied lands of American music.

His band comes out first, guitarist (and fiddler) extraordinaire Kenny Lovelace – who has been by the Killer’s side for near on half a century – no small feat – warms up the crowd with the New Orleans groove of “Slippin’ and Slidin,'” while bass player Ray Gann takes the vocal on Merle Haggard’s “Swingin’ Doors.”

The lights dim as a film is projected onto a giant screen – a compilation of interviews from the likes of Johnny Cash and Carl Perkins, interspersed with archival footage reminding the audience that they are in the presence of the Killer. The montage is compiled of footage decades old, the voices virtually inaudible in the theater. But its message is clear. All the while, a frail but confident silhouette makes its way, cane in hand, from the wings to the piano. Jerry Lee Lewis sits at the bench – in the dark – watching the giant screen. The audience watches Jerry Lee Lewis watching. . . Jerry Lee Lewis!

The film ends, the lights come up, Jerry Lee Lewis pounds out a boogie as the band falls in –

The opening foreboding rockabilly of “Down the Line” is followed immediately by the goodtime rhythm & blues boogie of “Drinkin’ Wine Spo-Dee-O-Dee.”

Jerry Lee Lewis is a wind tunnel – a relentless, unapologetic vehicle of American music. He harnesses it, strips it of extraneous novelties or pleasantries, and fires it off through his fingertips – all without electricity – ferociously depressing 88 slender slices of ivory or plastic, felted mallets plucking against steel strings encased in a wooden cabinet. He pounds eighth note boogie chords and he tickles descending single-note runs, flirting with time and dissonance, suggesting it could all fall apart at any moment. It could, but it doesn’t. His voice remains strong – he croons, he needn’t scream.

American music is born of conflict and dichotomy. From its seed – the blues – through its many beautiful and inevitable mutations and cross-pollinations. There is a reason Jerry Lee Lewis’ rock ‘n’ roll carries with it such a primal, frightening, and magnetic compultion. Jerry Lee’s music at its boogiest is an epic struggle for one’s own soul. He truly believes it is the sound of sex and, therefore, sin – the physical manifestation of the evil life force urge – yet he plays it anyway. He must.

His arrogance is equaled only by his talent. A talent heightened by something to prove from years of suffering indifference and outright dismissal. Jerry Lee Lewis is somehow both alpha and underdog.

Having mastered the boogie-woogie, having helped to invent rock ‘n’ roll, it is said Jerry Lee Lewis “reinvented” himself as a country singer in the late-1960s. But he was always a country singer. He was always an American stylist. His very first recording, in 1952, was a cover of Lefty Frizzell’s “Don’t Stay Away (Till Love Grows Cold).” His debut single, on Sun Records, was a cover of Ray Price’s “Crazy Arms.” His country records from the 1970s remain among the finest of the genre – and they were hits. His vocal on his 1969 version of Mickey Newbury’s “She Even Woke Me Up to Say Goodbye” – which he played this night – is possibly the single greatest country music vocal ever recorded. (The Country Music Hall of Fame’s continued omission of Jerry Lee Lewis makes it difficult for any educated student of country music to take the institution seriously.)

Jerry Lee pounds out the opening chords to “Me and Bobby McGee” as its writer – Kris Kristofferson – emerges from the wings, unannounced, to duet with the Killer.

“Good enough for me and Jerry Lee,” Kristofferson sings, to riotous applause.

The Killer says little this night, but he takes a moment to remind the audience that Kristofferson is one of the world’s greatest songwriters. “If I could write ‘em like Kris,” he confesses, “I would.”

Jerry Lee follows Kristofferson’s poetic country-folk storytelling with the Great American Songbook balladry of Hoagy Carmichael’s “Georgia On My Mind,” before moaning the sultry come-on R&B of Joe Simon’s “Before the Night is Over,” and then playing the blues with “C.C. Rider.”

Part of Jerry Lee’s genius is the reverence he holds for great songwriters – whether icons of the past like Hoagy Carmichael, the brightest lights among his contemporaries like Chuck Berry, or younger refined poets like Mickey Newbury and Kris Kristofferson, Jerry Lee Lewis has always played great American songs. And no matter how diverse the bag of voices from which he chooses his material, everything comes out sounding like Jerry Lee Lewis. Once the Killer puts his stamp on a song – from “Chantilly Lace” to “Sweet Georgia Brown” – there is seldom found a more definitive version.

The Killer has the audience dancing in the aisles with the spitfire poetry of Chuck Berry’s own musical fusion, “Roll Over Beethoven,” before forcing their examination of the utter depths of confessional country heartbreak with “She Even Woke Me Up to Say Goodbye.”

Jerry Lee Lewis is both guide and gatekeeper; advocate and custodian. A stylist.

And he is, remarkably, the last man standing. Not just of his first generation rock ‘n’ roll contemporaries, but of an original American voice. Jerry Lee Lewis sounds like Jerry Lee Lewis because he invented his music from the limited sources he had growing up in Ferriday, Louisiana in the first half of the 20th century. Such originality is no longer possible. The world is too connected. Everything is available everywhere. Regional nuances, the passing of human-to-human oral traditions, and simple moments of isolation can no longer survive the information stimulation onslaught of the modern world. That is neither here nor there, other than to say that Jerry Lee Lewis, who has always represented this American originality and authenticity, has somehow managed to survive long enough to be its last ambassador. This affords us proximity to a vanishing thing and it affords, perhaps, an unexpected redemption for a man haunted by his experiences.

The finish came with the godhead one-two knockout punch of the Killer’s own iconic rock ‘n’ roll hits: “Great Balls of Fire” and the culmination of it all, “Whole Lotta Shakin’ Goin’ On.”

There was a time when Jerry Lee Lewis would punch through his piano, literally, and punch through to some other dimension when unleashing “Whole Lotta Shakin’ Goin’ On.” With a tent revival preacher’s power of controlled chaos, Jerry Lee would wiggle his finger as if handling snakes, bringing us down, toying with us – cautioning us – before blowing it all into a frenzy with the sheer force of his most sinful rhythm.

Jerry Lee Lewis no longer punches through walls of space and time with such earth-shattering fright, but only because of the physical limitations of his age. The Killer still rages against the darkness. He came right up to it, pushing out more power and might than anyone could possibly expect from his 82 hard-lived years.

At one point during Lovelace’s guitar solo, Jerry Lee looked out at the crowd. Seeing them on their feet, dancing in the theater aisles – the way they have over a million shows, in auditoriums, concert halls, countless honky-tonks and barrooms, at state fairs or in the beds of pickup trucks in parking lots – the Killer smiled. Then he took it down, low, eaaaaaasy baby. Wiggling his finger around in one little spot, before bringing the house home.

Jerry Lee Lewis wears the mantle of elder statesman simply by doing what he does. He will not go gentle into that good night.

To punctuate this point, he stood, kicking out the piano bench, before grabbing his cane and surrendering to his handlers, stopping at the side of the stage, outside of the spotlight’s reach, for a significant moment. With his pimp cane in hand, his shiny suit of gold and silver wavy locks, the Killer soaked in the uproarious applause and adulation. With his stare he seemed to pose the rhetorical question asked in the title track to his 1972 album, Who’s Gonna Play This Old Piano?

Jerry Lee Lewis took a long, hard look at the audience, knowing he had left his answer all over the previous 30 minutes.

Who’s gonna play this old piano after the Killer’s gone?