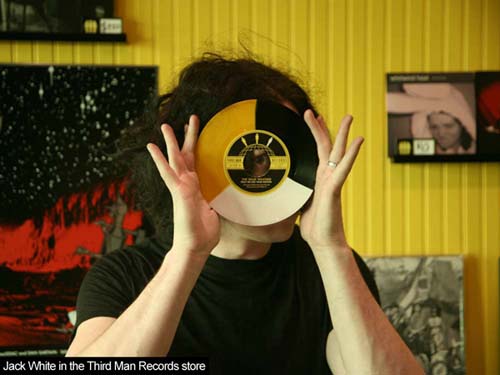 Jack White has spent the past few years adding chapters to a career that flowered as founder of The White Stripes. He produced a Grammy-winning country album for Loretta Lynn and launched two new bands. He also moved to Nashville and opened Third Man Records, a label that’s been widely praised for innovation, even though most of its tactics are decidedly old-school, like putting music out on vinyl 45s.

In last year’s documentary It Might Get Loud, White says he keeps creatively fit by contriving difficult situations, like wrestling with the shortcomings of a guitar others would discard.

“I keep guitars that are, you know, the neck’s a little bit bent and it’s a little bit out of tune,” he says. “I want to work and battle it and conquer it and make it express whatever attitude I have at that moment. I want it to be a struggle.”

Opening a record label during a decade-long slump in the music business sounds like the same kind of self-imposed dare.

“It’s a positive way of looking at a negative situation,” White says. “People aren’t buying records like they used to, so it’s nice to try to figure out a way to make them do it. I would enjoy the same thing to own an old movie house, to try to trick people to come in — like having 3-D or Smell-o-Vision or Vibra-Vision or something. Mcguffins to get people interested.”

The tricks at Third Man Records, which is located in a renovated downtown Nashville warehouse, include a boutique storefront with White’s music and all of the label’s records. Every release is treated as an event, and many label events get turned into releases. The label’s large in-house photography studio doubles as a live venue, and a recording booth sits immediately next to the stage.

“Every show can go direct to eight-track,” marketing manager Ben Swank says. “And the idea is if you come to the show, you’re eligible for a limited-edition black-and-blue split-color vinyl of the show, and then a regular black vinyl will be pressed and sold in the shop and online. But the only way you can get the limited-edition version is if you actually come to the show.”

Third Man isn’t skimping on audio quality, either. It’s recording with a multitrack analog reel-to-reel tape machine — state of the art for about 1968, with fidelity that some believe has never been surpassed.

One example is the new release from North Carolina folk/punk icon Dexter Romweber. It was taped at Third Man on a rainy night in February. In keeping with the label’s quick-turnaround philosophy, the record was available for sale by mid-March.

“We can technically have something recorded and on the street in about three weeks,” Swank says. “It’s a way to make the vinyl more immediate and tangible to kids who are used to having something right away.”

Romweber has also cut a single for Third Man, which marks something of a dream come true for White. Romweber’s 1980s band Flat Duo Jets, with its lone-guitar-and-drum lineup, was a major inspiration for The White Stripes.

‘Your Turntable’s Not Dead’

Growing up in southwest Detroit, White played and produced hard-edged blues and punk rock. He recorded himself and others from the moment he got his hands on a tape deck. Today he says he’s just doing the same thing, but on a larger scale. He brought another theme from his hometown, where his day job was running Third Man Upholstery. The company’s motto was “Your Couch Is Not Dead.” Today, the record company’s slogan is “Your Turntable’s Not Dead.” Third Man hasn’t released a single CD and has no plans to do so. All 36 singles or albums so far have come out only on digital download or vinyl.

Vinyl is the real deal,” White says. “I’ve always felt like, until you buy the vinyl record, you don’t really own the album. And it’s not just me or a little pet thing or some kind of retro romantic thing from the past. It is still alive. United Pressing Plant is two or three blocks away from here, and they’re pressing up millions of copies of vinyl every year. And people are still buying them in droves.”

United has manufactured records for Motown and Music Row since it opened in 1962. These days, the old pressing machines are going full tilt. Third Man’s director of production, Ben Blackwell, says he’s back and forth to United on a daily basis as they collaborate on new color schemes for their limited-edition releases. United workers slice hockey-puck-shaped ingots of colored vinyl in two or three pieces and then reassemble them by hand.

“And then that puck with the labels attached is fed into the actual record press, and approximately 20,000 pounds of steam pressure compresses that puck between two metal plates, which are the negative images of your actual record grooves, so when you have a record that has grooves, these pressing plates have ridges,” Blackwell says. “It really is mystifying and captivating, too. It’s almost like you feel something in the room while it’s happening.”

Third Man is an auteur’s project for sure: White produces all of the releases himself, including the latest music from 72-year-old rockabilly pioneer Wanda Jackson.

White says he could tell he was swimming against the Nashville way of recording when he swooned over the first take of Jackson’s song “Shakin’ All Over.” The veteran horn players wanted to fix mistakes. He was having none of it.

“The more we try to work on this and perfect it, the worse it gets,” he says. “And that’s what happens nowadays with people working on computers. They can so easily fix things with their mouse and take out all the, ‘Oh, somebody coughed in the background; we need to take that out’ — or somebody hit a bad note. Those are all the best moments, and that’s where music has taken a left turn and they need to get back on the road.”

White’s approach to the record business has been called a throwback and a harbinger of things to come. Fast Company magazine ranked Third Man among the 10 most innovative companies in the music business. Most of the others were digital in concept, with music streaming from the so-called cloud. Third Man’s approach is digital where necessary; tangible where possible.