Ian Felice on the ‘Road to America’ and ‘The Final Reckoning’

Ian Felice and I, sat down at the Maze to discuss his solo tour and accompanying CD ‘In The Kingdom of Dreams’. We settled in a dark dingy ‘Green Room’, less than a hundred metres from huge crosses and stone angels of Nottingham’s ‘Rock Cemetery’, and bang in the middle of the old red light district. The symbolism of that scene was not lost on me, those bleak statues stood blind and silent, like weathered beacons for the rich and famous, the poor and downtrodden. We were about to launch into a conversation about perhaps, the darkest yet most satisfying collection of songs I’d heard for a long time.

It was a cold English winter’s night, and we sat on worn out leather sofas, surreally, huddled around a bowl of fresh fruit. Support act Gill Landry (ex Old Crow Medicine Show), feverishly rolled a cigarette, as if that would somehow warm his frozen fingers. Felice joked, “I hope you’ll help me answer some of these questions Gill …?”. A reluctant conversationalist, he’s much happier, behind his guitar, or perhaps alone with his thoughts (?) and instinctively, he picked up his battered Guild and picked away at random notes as we began to chat.

We’d spoken before five years earlier in Birmingham, after he had just made it back from a cancelled tour due to ill health. So it seemed instinctive to ask about his health.

Alan J Taylor: So tell me Ian, I know you are just back from another cancelled (Felice Brothers) tour, how is the health?

Ian Felice: Yeah, you won’t believe this, but I just picked up shingles again, a few days before flying out for this tour, but I caught it really quick, I’ve got some meds and everything seems fine now.

Alan J Taylor: Tell us about the artwork on the new CD?

Ian Felice: It’s a painting that I have loved for a long time by an artist that I feel a connection to. Albert Pinkham Ryder, he’s an American painter from the nineteenth century who painted moody landscapes. This one is called Racetrack or ‘Death on a Pale Horse’ and depicts the skeletal figure of death sitting upon a dark horse brandishing a scythe. This type of semi-macabre folky painting, seemed to correlate with some of the imagery on the record, so I thought it would be ideal for the cover. It’s really dark. Maybe we should have brightened it up a little … but, I guess it fits with the songs (laughing). 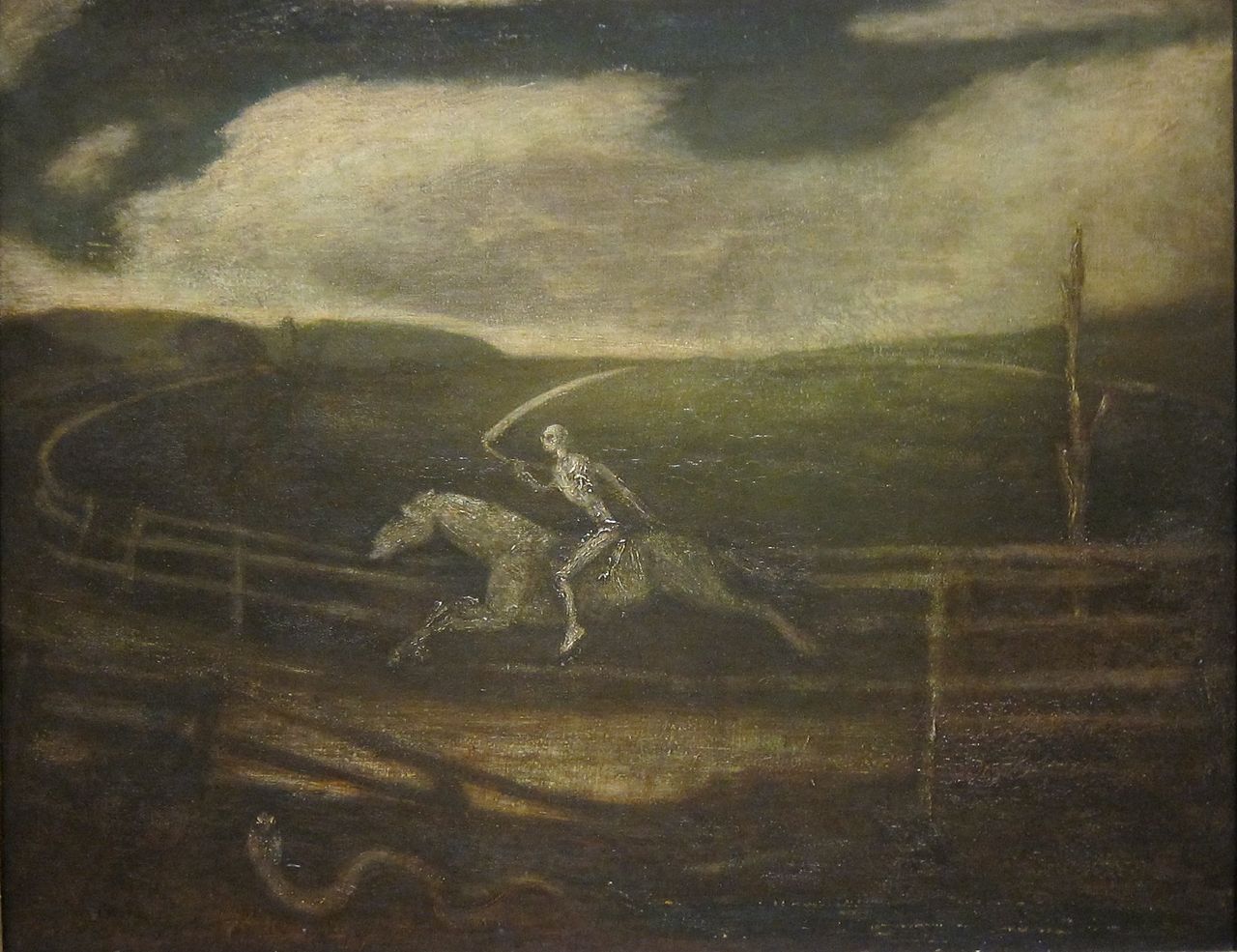 Alan J Taylor: Tell us about the musical production on The Kingdom of Dreams?

Ian Felice: Sure … it was produced at Sugar Mountain Studios. It’s a little studio run by my brother, Simone Felice who has a great little set up there, in my home town of Palenville. It was lots of fun to re-connect and have fun in the studio again. I thought Simone would be the ideal producer for the songs, because I wanted to keep them as stripped back and minimal as possible.

Alan J Taylor: How different was that compared to working with the band?

Ian Felice: Working with the band, things are filtered through lots of people’s different opinions (laughs). Which is sometimes good and sometimes not so good, depending on which way you look at it. Sometimes it can get removed a bit from the original source.

Alan J Taylor: Tell us a little about the inventive rhyming couplets that you seem to have so much fun with in the songs e.g. “the aliens landed on election day/and they stole your mother’s lingerie” … “they said your empire is about to fall/you’re just shoppers in an endless mall” from “21st Century”?

Ian Felice: I don’t really filter the stuff too much, like to stick it in, in places where it has some meaning, if it really sucks, I tend to ditch it, but I don’t analyse it too much. There’s really not too much analysis (laughs), and very few rules.

Alan J Taylor: I noticed that you levered the poet Hart Crane into the song “In Memorium” … tell us about that?

Ian Felice: I do a lot of reading, and Hart Crane is one of my favourite poets. He once said, “One must be drenched in words, literally soaked in them, to have the right ones form themselves into the proper pattern at the right moment.” I do tend to drench myself in words. I guess that sums up the song writing.

Alan J Taylor: So if you are writing and getting ideas, does that come from the literature or other music that you listen to?

Ian Felice: Not from music really. I think the best stuff I write comes from the subconscious, I just sit sometimes and find a melody, then I just sing into a recorder almost like a stream on consciousness, and then I just go back and listen and take the best bits. I like to use different processes. The best lyrics come without too much thought. I once read an awesome quote from Roger Miller, he said “the human mind is an amazing thing, it starts working even before you are born, and it only stops, the moment you sit down to write a song” (laughter all round).

Alan J Taylor: Did you have any particular musical influences and who do you still listen to?

Ian Felice: Throughout my life? So many. The people I listen to that I have listened to since I was a kid are, Neil Young, Bob Dylan, Leonard Cohen, Pete Seeger, John Prine, Townes Van Zandt, any of the old blues stuff. My favourite of the moment, is probably Michael Hurley, he’s a fantastic songwriter and his songs always make me feel happy, whatever mood I start out in. There is something about his songs man … if I want to feel better, I listen to Michael Hurley.

Alan J Taylor: I listen to songs like “The Road To America” and “The Final Reckoning”, I sense the fabric of the United States of America falling apart … talk to us about your country?

Ian Felice: (laughing) My country is very sad right now … it’s in a bad place. We just elected the worst human being I could think of, as our President. A man who is the most narcissistic, racist, almost psychopathic, sleazy TV personality billionaire (almost rambling) type character. The country is divided. Of course there are good people (shakes his bowed head), I guess it is almost too complex to talk about in a short time frame. There’s an obsession with guns and violence, there’s no system to help people who are mentally ill. We need a lot of help as a species (nervous laughter).

Alan J Taylor: In The Kingdom of Dreams is an interesting record, because you say many of those things without actually saying them. Tell us about how that works?

Ian Felice: Thank you, I guess that was my goal, I appreciate you saying that. I want to talk about it, but I don’t want to be too blatant about it … so I guess I use a lot of imagery and perhaps a little humour.

Alan J Taylor: It seems that most of the songs on the CD are about the implosion of society in the US?

Ian Felice: Yeah … it is. It hard, it helps when I do song writing for me to filter a lot of anxiety and shit that I’m feeling about the world. So it comes through in the songs. I use it as a kind of therapeutic thing in my day. The gravity of the problems we are facing, not even just Trump … I mean the collapse of the environment, nuclear war, all the crazy existential things that loom just above our heads each day. I seems it’s hard to write happy … you know songs about loves and shit.

Alan J Taylor: But you manage to inject the humour still …?

Alan J Taylor: Then Water Street (a song about Felice’s home life and new baby) takes us by surprise … tell us?

Ian Felice: Yeah … It’s the most kind of intimate, personal, glimpse into someone’s life (musing) …it’s very autobiographical, I like that one (laughs) but it doesn’t really address … (tails off) it just captures a little moment, a mood.

Alan J Taylor: How does writing help you?

Ian Felice: Making art or music or generally writing, is part of what I do to feel better, its a kind of therapy. It’s why I really have to do this for a living, or else I would implode, or be on Prozac all day. I’ve just completed a book of poetry Hotel Swampland too, it helps me to work through stuff in my mind. The processes are different, the poetry tends to be much more analytical, yet can be more vague and rambling.

Alan J Taylor: So how has this solo tour gone so far?

Ian Felice: It’s fine, it’s going good. It’s a lot different; it is more of a challenge, very different from playing with the band. I actually get a little nervous, which I never do nowadays with the band. I like having no crutch to lean on and having to be able to captivate an audience by yourself … it’s good.

Alan J Taylor: Fans of the Felice Brothers, could perhaps be forgiven, for wondering about the future of the band … having seen most of them supporting Conor Oberst on his live tours, Simone’s departure from the band and now your recent solo project. What would you say to reassure them? Is this the end of their world?

Ian Felice: All is well. We are starting to work on new material now and hoping to put out a new Felice Brothers record in the near future.

Ian Felice: (laughs) Very Festive. We live in a tiny Northern town out in the country. It’s very snowy, an idyllic setting. We have a really nice time, my Mom makes just the best dinner, it’s a pretty chilled experience. I’m a sucker for all those old Christmas songs, Silent Night, all that Bing Crosby stuff; I get myself into the holiday spirit.

Some time later that evening, he delivered a majestic theatrical solo performance to a spellbound audience, with songs from the heart, both old and new. The (encore) rendition of “Ballad of Lou The Welterweight” … was Felice at his tortured best.

In the Kingdom of Dreams is issued on Loose Music

POSTSCRIPT: 8 weeks later, the Felice Brothers issued this statement on their Facebook page …

“After 10 long years of being in the Felice Brothers, playing music in shady bars, rock clubs, opera houses, and under the branches of pear trees, recording in a mansion of dreadful shadows, in flooded garages and forgotten gymnasiums, howling and generally living it up on the moon-drenched streets of America where wind rattles the brain, Josh Rawson and Greg Farley have decided to leave the band to pursue other interests. Its sad, I know, but also exciting to think of all they will create in the future age, sure as Ol’ Faithful’s gonna blow. They are both amazing and talented people and we will miss working with them dearly. We salute them both and wish them all the best in their future endeavors and dreams. God bless you, amigos.”