Inside the Songs: Wes Tirey’s Literate and Beautiful EP

April Wolfe at Common Folk Music got me connected to the lush, beautiful, and yes, literate, songwriting of North Carolina’s Wes Tirey. Downloading his new EP, I Stood Among Trees, off Bandcamp I just kicked back in my chair and listened. I tried to glean the meaning behind his songs, I tried to track the story as it unfolded in the song. Usually I consume music like a half-starved man, wolfing down entire albums while eyeing the next possible meal, moving on to the a new album while I’m still chewing on the last one. But Tirey’s music stopped me cold. It gave me a moment of peace and thought, a break from the noise of music. That’s a strange thing to say, but great writing will make you take a step back to consider.

Everything about Wes Tirey is compelling, hell even the town he lives in is interesting: Black Mountain, North Carolina. Just hearing that I’m spinning up crazy stories about the people in his town. I knew I had to find out more about Tirey, so I dropped him a line to see if he’d do an Inside The Songs. I hope you get the same chance I did to really listen to the music that Wes Tirey is making. He’s got a powerful vision.
Hearth Music Inside the Songs with Wes Tirey

Wes Tirey: “As a philosophy student, I’m forced to write a lot –– so I do write outside of songwriting. I write poetry here and there, but not too often these days; it comes and goes –– mostly goes. I can’t say that my academic writing influences my songwriting, or vice versa, but it does keep my brain sharp. The things I study as a student do have a big influence on my songwriting, though. I mean, I may not be writing about Plato or Hegel, but exploring how empirical experiences can lead to a song is pretty cool.

I work at the writing center on campus, so I tutor students on writing throughout the week. It’s an amazing job. I help edit the undergraduate research journal, too –– so I’m surrounded by writing everyday.”

“Most of the songs on the EP I’ve had under my belt for a while. I had a couple years where I wasn’t entirely sure what I was doing with my music. I wrote a lot of instrumental pieces, but was struggling with writing lyrics. It wasn’t until last winter that I started writing stuff I was really satisfied with; but when I finally decided to go into the studio again, I knew I had to record some older songs, “The Evening Tide” being one of them.

I wrote it six years ago, when I was 21, in between classes at the community college I was attending. (I think I even wrote some of it in class –– but it was a math class, so I wouldn’t be paying attention anyways.) I had been burning holes in my copies of Bob Dylan’s Highway 61 Revisited and Townes Van Zandt’s Townes Van Zandt, listening to “Desolation Row” and “Fare Thee Well, Miss Carousel” religiously. I was also reading Flannery O’Connor’s short stories like they were devotional studies. I wanted to write a kind of Southern Gothic “cast of characters” song, and after I wrote the first line down, everything else just fell into place.”

I wrote it in 2008. I had played a show in Cincinnati, and when I was driving back to Dayton I got caught in one of the worst windstorms in Ohio history. There was a really strange, apocalyptic feeling in the air. My radio and CD player both weren’t working in my car, which actually made for a good environment for songwriting. By the time I finally made it back home I had about half of the song written (in my head –– I could roll a cigarette with one hand and drive, but never mastered writing and driving). The power was out at my parents’ place, so I went up the road to my grandparents. My sister had the TV on –– the market had literally just crashed. The mixture of environmental and economic calamity really cemented the eerie, apocalyptic feeling, and when I went back home I finished the rest of the song, the tone of it changing from an account of the apocalypse to a display of spiritual writhing (please excuse the melodrama –– I’m full of it).”

“This was one of the new songs I wrote for the EP before going into the studio. Last summer I read Cormac McCarthy’s Blood Meridian, and during the winter I was reading the bible –– especially the Old Testament –– on and off. In the annals of American folk music, it’s basically impossible to avoid biblical references and imagery in songs, so I like to go to the source itself. It’s such strange and beautiful stuff –– just listen to Bascom Lamar Lunsford sing “Dry Bones” or Blind Willie Johnson sing “John the Revelator” and try not to be moved somehow.

Blood Meridian itself is rather biblical in its prose, and the imagery in it is so violent. (How McCarthy manages to make such a brutal book beautiful is beyond me.) It obliterates any notion that we’re fundamentally good by nature –– or it at least suggests that we’re all equal in that we’re all equally capable of doing evil things. I used “Wild Beasts” as a space to explore that idea; but I didn’t want it to have a straightforward narrative –– so I made sure that it was more of a landscape piece than a story.” 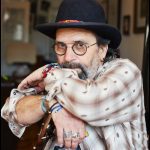