In Other News: The White Stripes – The Breakup is “Official”

We here at SomethingElse! were sad to see the report of the official breakup of The White Stripes. However, there are many, many websites out there that appear to be swallowing Meg & Jack’s word on the subject (a fine compendium can be found at National Public Radio’s The Record).
This isn’t surprising, since the true reason for their breakup has been kept under wraps for several years. What follows is a long-lost “review” of the White Stripes album Icky Thump, a rumpled copy of which was found abandoned in the desk drawer in a room at the Motel 6 in Yarmouth, Maine. It has been determined that the material was produced on a Hermes 3000 manual typerwriter. The author has never been determined.
I can’t stand it! This band that I love so much, these White Stripes… well, there’s a big problem and the world must know. It has to do with Jack and Meg. No, it’s mostly Meg. No, it’s all Meg. Read on, if you can stomach the truth. I’m sorry, but this must be done.

See, I’ve had some recent contact with Meg. All is not well. Listen to me people! Listen!!

Right, the contact. I bumped into Meg at Lou’s Records. She was poking through a dusty stack of old Gene Krupa albums and I commented on her good taste. We talked for a while about your Krupa’s, your Art Blakey’s, and your Louie Bellson’s. Impressed with my knowledge of Big Band drummers (or maybe it was my pale complexion), Meg asked me out to dinner. Shocked is what I was. The vegan restaurant was intimidating, but Meg’s warmth and simple beauty put me at ease. After a nice bottle of Pinot, we ended up back at her place.

Shocked, is what I was.

After Meg put on a Son House record, we got into a long and winding conversation about the music world. After a fashion, I could no longer help myself. I just had to bring up Icky Thump. Meg would have none of it. She just shook her head and before I knew what was happening she pushed me over into the couch’s stack of pillows. The exchange of personal spaces and fluids excited me to no end. I am a man, yet my fanaticism would not let up. My attempt at bringing up Meg’s garagey drumming style vs. Jack’s almost Eastern-sounding guitar leads was met with another head shake. Silencing me with an index finger over her red lips, she pressed her breasts against me. Time began to lose its focus.

What? This can’t be! I remind her of the career dangers involved in becoming attracted (again!) to the man.

Obviously, I am not opposed to what’s going on in our current physical space. At the same, I’m very concerned for the welfare of the band. Can a person be their own Yoko Ono? I take a different approach, asking her if she’d noticed that Jack sounds a little like Billy Squire when he hits his upper register.

Nothing appears to distract Meg from her mission. Part of me wants to completely give in to the pleasure, to allow myself to be used as a Jack White surrogate. Still, the musical loyalist in me can’t give up… yet.

Do you guys listen to a lot of Delta Blues records? What about the psychedelic stuff? Are the Page/Plant references intentional?

“I’m warning you… roll over or there’s going to be trouble!”

So that’s it! That’s why your beat wavers! You’re a Jack White horndog, distracted in the studio! (I figured maybe a more direct approach was in order).

Meg, some of your most subtle drumming shows up on “Conquest” (honestly, it doesn’t… but I was desperate!). That song is a blast! Patti Page, huh? That Jack has some big ears, eh?

“Ooooh, that reminds me! I have a matador outfit in the bottom drawer over there. Put it on… no, just the jacket!” 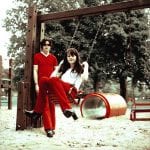