Walking into Boulder’s eTown Hall (yes, little “e,” big “T”) for the first time is something like basking in the afterglow of a religious experience.

General admission seating on each side of the venue includes rows of wooden pews, and the source of inspiration for the modestly sized stained-glass window must be Nashville’s Ryman Auditorium, the Mother Church for country singers of yesteryear as well as today’s Americana artists.

Gauging the number of first-time visitors to eTown’s house of worship by their applause, warmup announcer Ron Bostwick remarked, “I sense some new converts are in the audience.”

So it made perfect sense to thank the Lord for bringing Lake Street Dive to Boulder, Colorado, on a glorious Sunday evening in early spring. Even if you aren’t a true believer in a supreme being, seeing this Brooklyn- and Boston-based quartet live is pure heaven.

The act that started out as a bar band comprised of jazz music students from the New England Conservatory 10 years ago has finally been elevated to Must-See Group of the Year status.

Of course, the members paid their dues during endless road trips, with little to show for it in return other than concentrated pockets of devotional followers.

Barely a month after the release of Bad Self Portraits, they made their eTown debut on March 23, performing for a taping of the nationally syndicated variety show in the midst of a string of sold-out dates throughout the country that included a Denver stop the previous night. 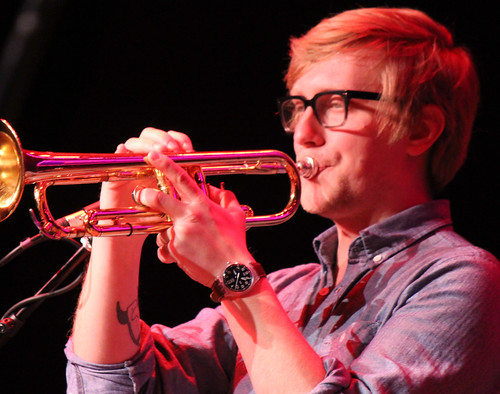 Asked by cordial eTown host Nick Forster if the band ever envisioned this kind of success, Olson (right) said, “Oh, we’re absolutely in a state of denial. Every time something new happens, we’re like, ‘Man, I could have never seen this coming. … But it’s happening, and it’s really, really wonderful. … Things are just kind of happening for us in the past year but it’s not like it’s a totally new fan base. They seem very familiar and a lot of them have been with us for years and years. So that feels like it keeps us grounded.”

The same could be said of eTown, a nonprofit organization Forster launched on Earth Day 1991 after years of performing in Colorado bands like Hot Rize, which he joined as a bass player in 1978 after it was established by Tim O’Brien, Charles Sawtelle and Pete “Dr. Banjo” Wernick.

My first memory of eTown was when Maria McKee, building a solo career after leaving behind Lone Justice, shared the bill with Los Lobos at the Boulder High School auditorium in 1993.

Just like it is now, the emphasis was on music, but by showing an independent spirit and environmentally sound thinking while making an educational contribution to a well-meaning and entertaining program, eTown leaders connected with their residents without sounding too preachy.

Thankfully, the support has grown over the years, allowing eTown to move into a permanent 17,000-square-foot home at 16th and Spruce, transforming what was once the Church of the Nazarene into an energy efficient building with the help of 236 rooftop solar panels.

Perhaps following the master plan created by A Prairie Home Companion with Garrison Keillor, the eTown show utilizes a similar format, with abbreviated sets by artists who also are interviewed informally while standing on stage with Forster.

The two-hour show, which is edited down to an hour for the program that will air on about 300 radio stations some six to eight weeks from now, also featured the heartwarming/heartbreaking abilities of singer-songwriter Eilen Jewell, an expectant first-time mother whose fourth (and most recent) full-length solo album was 2011’s Queen of the Minor Key.

Among other segments of a fast-paced production were: a couple of instrumental interludes; more announcements (and a bad joke about a penguin) by Forster; his interview and salute to their latest E-Chievement Award winner, Jeromy “Doc” Adams, for his charitable work with Children’s Miracle Network Hospitals through online gaming and his extra-life.org website; sponsor recognition and appreciation by Nick’s pleasant and smooth-talking wife/co-host/eTown partner Helen Forster; and recording do-overs of the audience if their applause didn’t quite pass the audition.

Whew! It doesn’t seem like it would leave much room for music, but “opening act” Lake Street Dive managed to knock off six songs in separate appearances about an hour apart, easily making it under the imposed time limit. 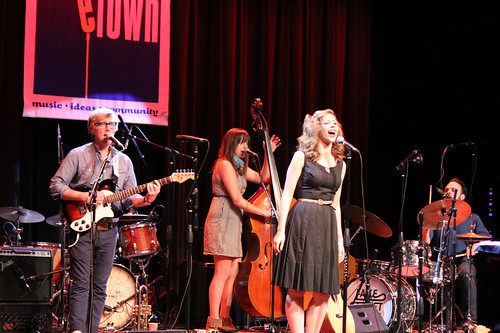 They began with two from Bad Self Portraits, as Price’s booming vocals catapulted Calabrese’s “Stop Your Crying,” followed by their exhilarating doo-wop, street-corner chorus on the album’s title track, the singer growling some of the bitter words written by Kearney.

Now firmly entrenched in the public’s consciousness after loads of positive reviews and in-depth interviews (including my chat with Price for The Huffington Post), it’s difficult to unearth new information about this nitty-gritty gang of four.

During his breezy 15-minute interview with the band, Nick Forster did extract the following tidbits:

• Price recently assisted at an all-girls camp at the Institute for the Musical Arts in western Massachusetts and taught a group of budding musicians how to sing “Midnight Train to Georgia.”

• Olson avoided revealing his first choice to join the band, which he named at the conservatory with a tiny enrollment, but still managed to get in a jam when he said, “It was at once not hard to pick these guys because there weren’t a lot of other people.” Despite the ongoing laughter, he added, “But truly, truly the cream of the crop, I must say. How am I doing, guys?”

• Calabrese and his fellow students were determined to play avant-garde jazz in honky tonks. “So chew on that for a second,” he said. “It didn’t take long for us to chew on it and realize it sort of didn’t work.”

• For Kearney, the most disarming aspect of last fall’s landmark concert in conjunction with the Coen Brothers film Inside Llewyn Davis that aired on Showtime “was mostly just about, oh my God, Joan Baez is playing right now and then we’re gonna play.” 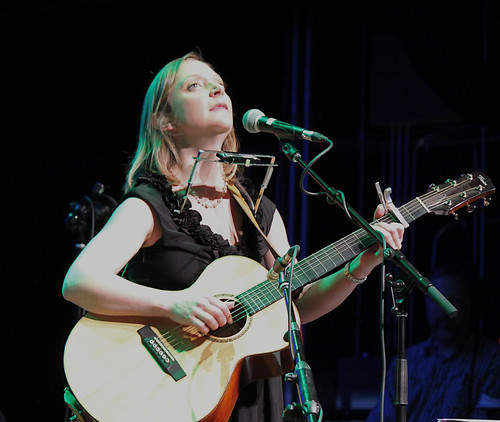 Jewell (left), Lake Street Dive’s label mate on Signature Sounds, must have been experiencing similar feelings when she arrived onstage almost an hour into the show, dealing with a false start on a new song she wrote ironically called “Worried Mind” while struggling to get her guitar in tune.

Having been introduced as making her mark in a competitive Boston market without the benefit of attending one of the city’s many noteworthy musical institutions, Jewell cooly handled the tuning problem, saying, “I guess this is why people go to music school.”

Her dry sense of humor, offsetting the infinite sadness of her songs, continued during the interview portion of the show when she admitted she didn’t care for mainstream country music in the 1980s and ’90s. But when her college friends in Santa Fe, New Mexico, later introduced her to Hank Williams, she said, “The first time I heard ‘There’s a Tear in My Beer,’ I thought, ‘Now if that’s country music, I like that.’ ”

The Boise, Idaho native, a child of counterculture parents, is also involved in the Sacred Shakers, a group that plays blues- and country-influenced gospel music. That idea was conceived almost a decade ago by drummer Jason Beek, who married Jewell in February 2010, the same year she released Butcher Holler, her Loretta Lynn tribute album.

Jewell’s all-male touring band that includes Beek, guitarist Jerry Miller (with his tangy twang) and upright bass player Johnny Sciascia, helped her switch gears in Boulder, from the western swing of “Rio Grande” to the lonely balladry of “Sante Fe” that concluded her four-song set.

Lake Street Dive returned for two more songs from Bad Self Portraits — “Bobby Tanqueray” (featuring Kearney’s plucky bass run) and “You Go Down Smooth.” They also gave one of their favorites covers, Paul McCartney’s Wings-era “Let Me Roll It,” a jazzy kick as Olson offered trumpet blasts and lent his electric guitar to Price.

Almost all the night’s performers, including the Forsters, came together for the fab finale, a soulful rendition of the Beatles’ “Don’t Let Me Down.” Sharing vocal duties with Jewell, Price held a sheet of lyrics but passionately belted out the words like she knew the song by heart.

Members of both bands posed for pictures afterward, while the crowd that surely included its share of converts, slowly trickled out of the building.

Before departing, some of these blessed witnesses to divine intervention probably were tempted to genuflect.