If You Want to Dance with Me

Last weekend I went to what we might have once called a folk festival and was blown away by the power and majesty of a pure kick-ass electric set. It seems to be an affliction when you dwell in this house of roots music fandom that after a period of time you can become overwhelmed with a false notion of authenticity that only comes with acoustic instrumentation and some sort of lineage that will lead you back to Appalachia or New Orleans or Greenwich Village or any other place you can come up with that reeks of heritage and history. As I seem to have forgotten on occasion, there is a time and place to forget about trying to figure out where and when, and just shut your eyes as the music washes over you from head to tapping toes.

Perhaps its a condition of age. Or not. Given that some of the most muscular rock music comes from people now in their fifties, sixties, and seventies is not necessarily all nostalgia, no matter how it may be marketed and packaged. Although I can guess that many in the audience are in large part reacting to a trip down memory lane, it ain’t all be rice and beans. There’s got to be steak on the plate to create a meal of sonic treats that will leave you feeling satisfied and fulfilled.

What has made me slow to a crawl in going to see loud amplified music at larger venues for any genre has been the production and scale. The moves are all the same, the set list rarely changes, the cost and opportunity to acquire tickets are beyond my pay grade, and the lighting, set design, and ambiance are designed to elicit emotion. Sort of like what Disneyland does. Or a Broadway play. Or a show in Vegas. None of which are wrong or bad, but just not my thing.

Last Saturday morning it was cool and drizzly when I got to Clearwater, the festival known for being founded by Pete Seeger. I bypassed the big stages to start my day at a song circle that was led by a trio  of talented local musicians who did a great job of setting my mood straight. I caught Mike and Ruthy’s new band, which did a great set. Kate Pierson from the B-52s was next; an odd choice, I thought, but young hipsters in long beards and flowing dresses danced like lobsters as I slouched off towards the river toward the dance tent. The Klezmatics! Who doesn’t like an accordion, fiddle, horns, and clarinet? Hundreds were dancing the hora. I stood outside with my umbrella.

I really had come to see just one band. They were scheduled mid-afternoon on the main stage, and by now the rain was steady and umbrellas were up. As festivals go, Clearwater is very orderly and neat. People come early, put out their chairs and blankets, and when they get up to wander to other areas in the park, anyone is allowed to occupy their empty spaces. But everything was soaking wet, so I made my way to the small area at stage left that is reserved for dancing.

Los Lobos. Damn. It’s been so long since I last saw them; most likely in LA during the eighties. I’ve been a fan, but hardly a fanatic. My old friend Chris Morris, who has authored their soon-to-be-released biography, has lately been posting on Facebook about them and it piqued my interest. And from the opening chords of the first song to the last, the mighty and powerful wolves played music that seeped into the cracks and crevices my soul and made my feet frolic in the puddles. Loud. Driving. A wall of amazing sound that shot out across the field like a bolt of lightening against a soundtrack of thunder. I’m screaming, dancing, and done. Like the bunny, I’m energized again.

Have about 80 minutes to spare? Probably not. But here’s the full 1999 Woodstock set that the band did. I’m going for it. 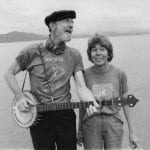 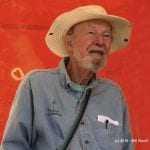