One of the remarkable traits of the Telluride Bluegrass Festival is that there are plenty of opportunities to hear great music throughout the town for free.

Of course, there are street musicians playing their hearts out as festival-goers enter Town Park, but Planet Bluegrass offers a series of free “workshops” during the four-day run that provide more intimate glimpses at some of the artists who may — or may not — appear on the main stage. Among the artists featured throughout the four-day event were Abigail Washburn, Bela Fleck, Sarah Jarosz and the Punch Brothers.

“There’s this moment in time where as an MC, I see myself as a conduit in bringing the performers up to the height they deserve and to bring the audience to the performer,” Planet Bluegrass’ Edie Gail said in her introduction of Watkins. “And there’s also that moment of — am I going to give this person her due?”

Mentioning some of the artists Watkins has performed with since her days with Nickel Creek, including Bela Fleck, The Chieftains and Richard Thompson, Gail said, “It’s indicative that the kind of company she keeps is the kind of quality she brings.”

Watkins (shown at the Decemberists show), who teaches at the RockyGrass Academy in Lyons, Colorado, every chance she gets, breezed through numbers such as Jimmie Rodgers’ “Any Old Time,” which she learned off a Tony Rice recording, “My Friend” and “All This Time.” All three tunes are on her self-titled debut album that was released in 2009 (Nonesuch Records).

Although she performed on her album with some of these musicians, Watkins termed this casual performance “an experiment,” which was more off-the-cuff than well-rehearsed. “I’m really sorry guys,” she said. “I actually had it written down who was playing on things and then everything changed. I’m sure you’re criticizing every bit of this little bit here, so I want to explain.”

That wasn’t necessary as she delighted the understanding audience with the traditional (“Jordan Am A Hard Road To Travel” with accompaniment from Hass and Watson) and covers from artists such as John Prine (“Mexican Home”), Linda Ronstadt (a lovely “Different Drum”) and John Hartford, the singalong set closer “Long Hot Summer Days” that’s also featured on her album.

There was more “work” to be done later in the day for the Decemberists and Watkins, who is touring with the Oregon-based band (“It’s been a treat to be playing with her this year,” Meloy said).

The Decemberists were a band “I saw for the very first time on this very stage all the way back in 2005 and it changed my life,” said Jarosz, a rising star and multi-instrumentalist on the roots music scene who had the honors of introducing her life-changers.

Meloy charged through selections from their most recent release, The King is Dead, including “Down By The Water,” “June Hymn,” and “Rox in The Box.” Meloy sarcastically said he was offering one number “free of charge” as the campaign theme song for Michele Bachmann, the Republican and Tea Party supporter who recently announced her run for president in 2012. The “Calamity Song,” drew raucous cheers and applause from the left-leaning crowd.

Meloy also made a running joke pay off big time near the end of the set. He recalled challenging some of the top pickers (Fleck, Douglas) to a “pickoff” during his last visit here (2006) and they never showed, so “we decided by forfeit we won.” Both did make an appearance this time, a comical “competition” with Meloy and Decemberists guitarist Chris Funk that floored everyone onstage. (Meloy shown with Fleck, right.)

On a night of wisecracking and frivolity, Meloy did get serious for a moment, mentioning the absence of one of their bandmates, keyboardist Jenny Conlee.

At home in Portland, she’s undergoing treatment for breast cancer. “She’s tough, she’s strong,” Meloy said, pointing out a poster in the crowd made by Marcy Islas of the Arizona Health Sciences Center that read “Breast Cancer Sucks But Jenny Rocks.” He dedicated “Rise To Me” to Conlee, adding, “We’re hoping to get her back in the fold real soon.”

As a result, Watkins who had been playing fiddle and singing harmony before Conlee’s departure, has taken on a bigger role with the Decemberists. But she filled in admirably, even pounding the drum on “The Rake’s Song,” an explosive cut off 2009’s The Hazards of Love that was one of the many highlights from a 75-minute set that took their brand of art house folk-rock to glorious heights. Watson (left, with Cory Younts and Winston Marshall), who was considerably more low-key earlier in the afternoon with Watkins, also saved his best for last. A wild and wooly “hillbilly” Old Crow Medicine Show rivaled the previous day’s set by Trampled by Turtles for equal parts madness and merriment. Watson, who talks as fast as he plays guitar, brought some “high-altitude proselytizing” to the night’s proceedings with “I Hear Them All” and even managed to slow it down a bit on a duet with special guest Emmylou Harris (“We’re All In This Together”).

It was the Nashville-based band’s second visit to the festival, and they made quite an impression as revelers stayed on their feet throughout the set that ended well past midnight. The band was visited by members of English folk-rock phenoms Mumford & Sons, including Ben Lovett and Winston Marshall on “Raise A Ruckus” and “Alabama High-Test” followed separately by heartthrob Marcus Mumford (right) on “Take ‘Em Away.” All three rushed off to a NightGrass show at the Sheridan Opera House shortly afterward. A dose of Old Crow Medicine was just what the doctor ordered, and if Mumford & Sons can top that on closing night, we’ll all be healed. 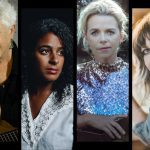 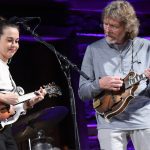 THROUGH THE LENS: ‘Old Trails, New Tracks’ at MerleFest 2022