I arrived early for Rhiannon Giddens‘ Saturday afternoon show and grabbed a seat in the front row. Rhiannon was already on stage for the sound check, wearing a loose fitting jacket over her stage dress, chatting with band mates and crew. She casually ran through vocal exercises like the trained singer she is. When it time came to play, she removed the jacket and waited while the lights came up, and the stage announcer introduced her and the band. There was no big entrance, no star turn. She then turned in a perfect, polished performance; one of the best I’ve seen in more than a decade of this festival.

Music festivals inevitably throw up pleasant surprises, none more so than a headline act who exceeds one’s lofty expecations. So it was with Rhiannon Giddens. She has a voice of uncommon beauty, commands a wide range of material, and summons the poise, personality and stagecraft to tie it all together. Oh, and she plays excellent fiddle and banjo.

The set was, as Ms Giddens said, a tour of American roots music, beginning with “Spanish Mary” from The New Basement Tapes (words by Bob Dylan, tune by Rhiannon Giddens), and ranging through country (Dolly Parton/Patsy Cline), blues, folk and gospel. Much of the material came from Giddens’ first solo album, Tomorrow is My Turn, but sounded even better in this setting, played with gusto. A welcome surprise was Giddens’ nimble turn at Scottish mouth music. The overall effect is not “musical tour”. It’s “Rhiannon Giddens”.

“Star” was once an over-used word, but has little currency in the broad sweep of roots music that gets my attention. I couldn’t help but think, however, that Rhiannon Giddens has the makings of an old-fashioned star – extraordinary talent, good looks and that quality – charisma, x factor – that we feel but struggle to describe. Her range, as in the range of material she can turn her mind to, seems boundless. It struck me that she could, for example, put together a Sondheim album. If so, I’d stand in line to buy it.

The Big Top, the main stage at Katoomba, is a first grade festival space these days, with a roomy stage, big screens to each side, and truly excellent sound. The Blue Mountains Music Festival is in that sweet spot where everything is run very professionally, but the event is intimate enough for artists to mingle with fans. Artists truly love playing Blue Mountains, with its relaxed and friendly vibe, clean air and exotic location, regaling audiences with tales of late night jam sessions at the Carrington Hotel and encounters with the local fauna.

The festival kicks off at 7pm on Friday night, and the main stages close just 48 hours later, but it’s a packed schedule – seven stages, and a number of morning talks and workshops as well as the main performance schedule. It’s a hardy fan who can make the most of it. 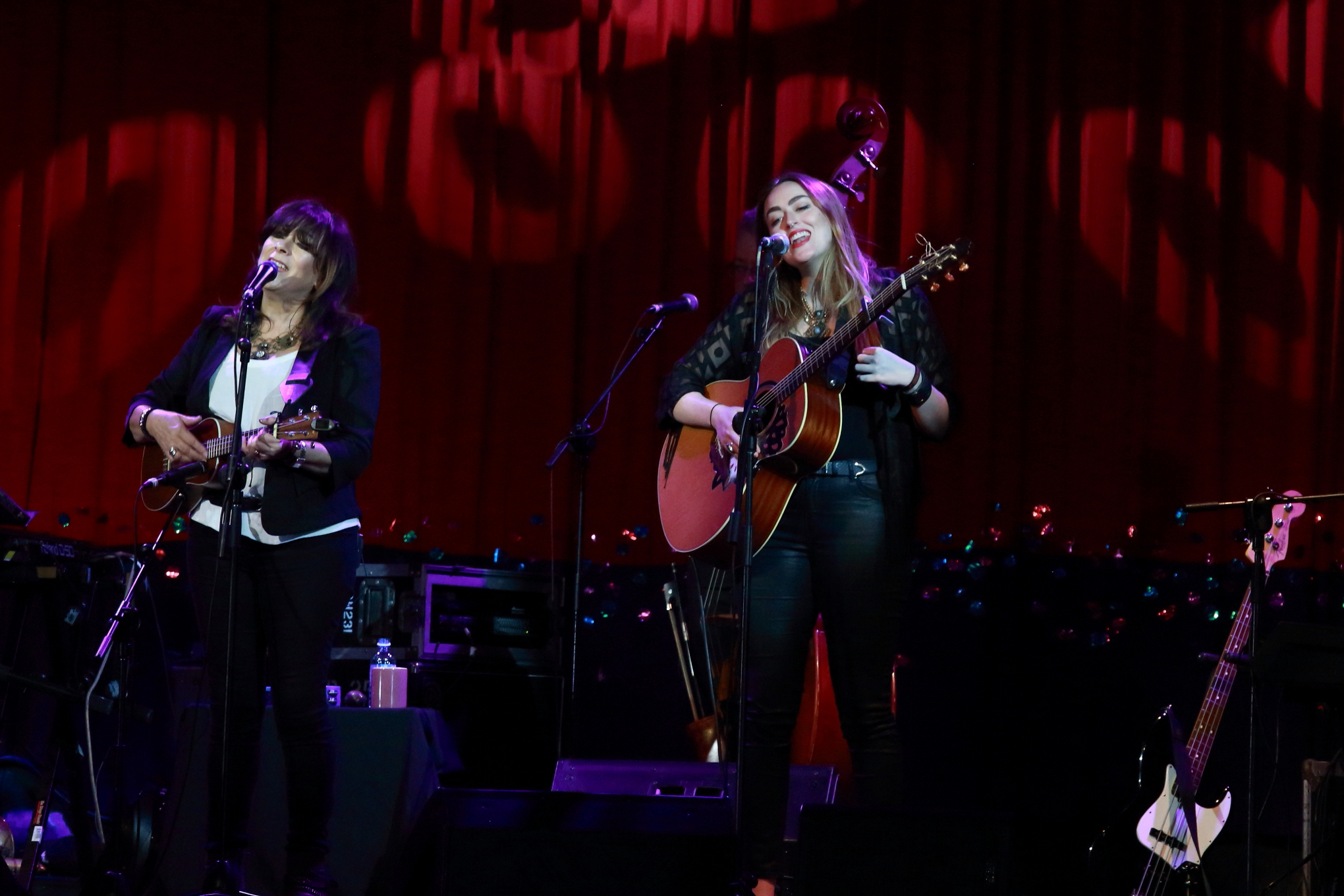 From the moment the line-up hit my inbox, the 2016 festival was about two extraordinary women, Rhiannon Giddens and Mary Black. While Giddens’ star is well and truly on the rise, Irish singer Mary Black is nearing the end of a stellar career. At 60, this is her final world tour. For me, it felt like an opportunity to farewell an artist whose music has been a big part of my life for more than 30 years. Mary Black’s music spans folk and pop, veering a little to the AOR side for some. For me, she is one of the best singers in the business, with a great ear for a song.

The great Pat Crowley has been her keyboard player since the 80s, gracing her best material. The band for this tour also included veteran guitarist Bill Shanley, another of Ireland’s best players. Mary Black’s duet on “A Woman’s Heart” with her daughter, Roisin O, was a touching moment. The highlight, however, was “Song For Ireland” with only Pat Crowley at the piano for accompaniment. It’s a tough song, and I wasn’t sure she would tackle it. So glad she did. 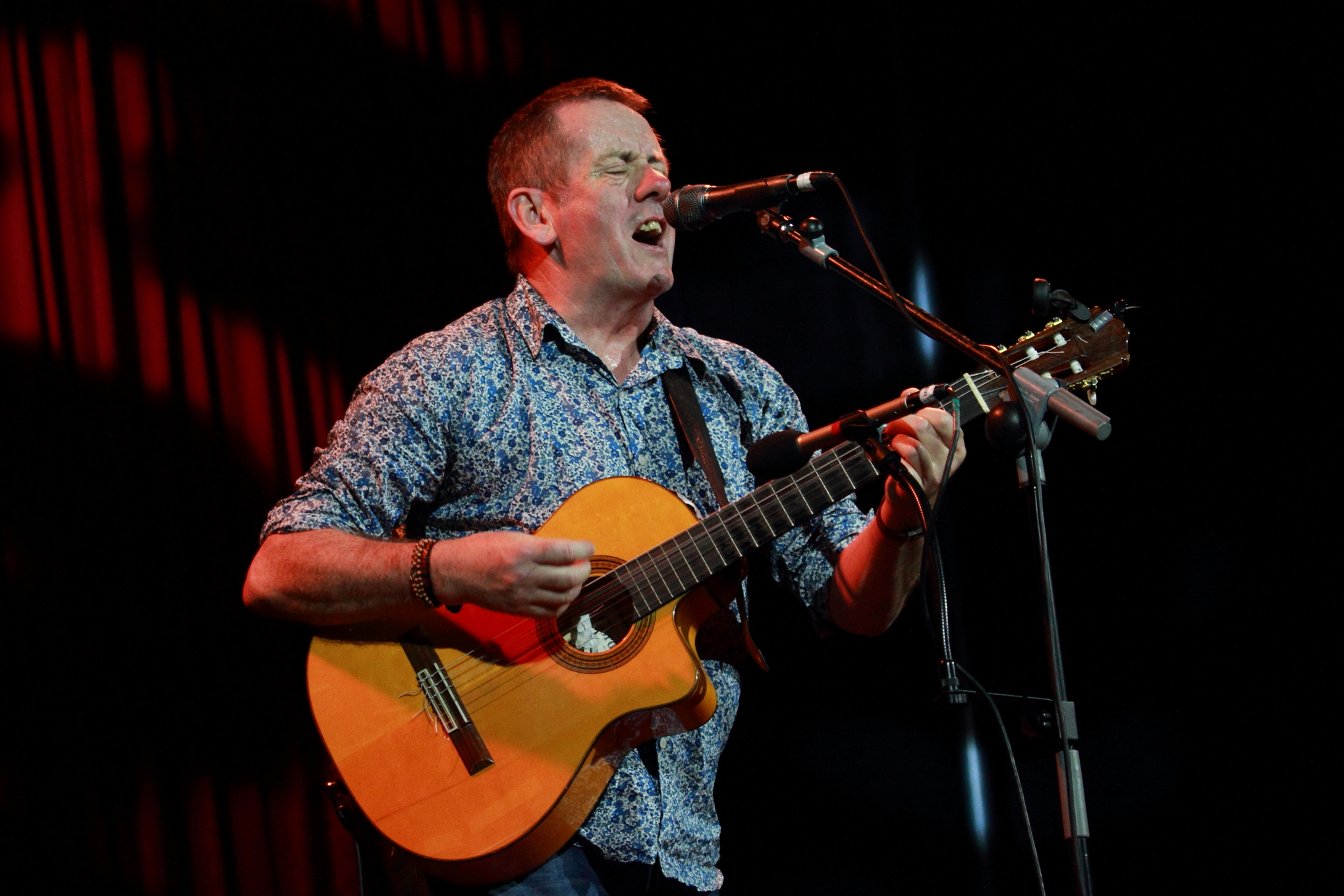 Luka Bloom was, to his obvious delight, sandwiched between Rhiannon Giddens and Mary Black at the Big Top on Saturday. “What a job,” he said with a grin.

An hour with Luka Bloom (born the same day as Mary Black, in the same hospital) is much like a conversation with a charming and loquacious old friend. For Irish folk music diehards, Bloom may have lived in the shadow of his brother, the great Christy Moore, but he has a large and loyal Australian following, having been on the festival circuit for many years.

He was in good form, a highlight being his version (now rarely played) of LL Cool J’s “I Need Love”.

Almost apologetically, he introduced Australian indie rock classic “Throw Your Arms Around Me” (by Melbourne’s Hunters and Collectors). He nailed it, of course. 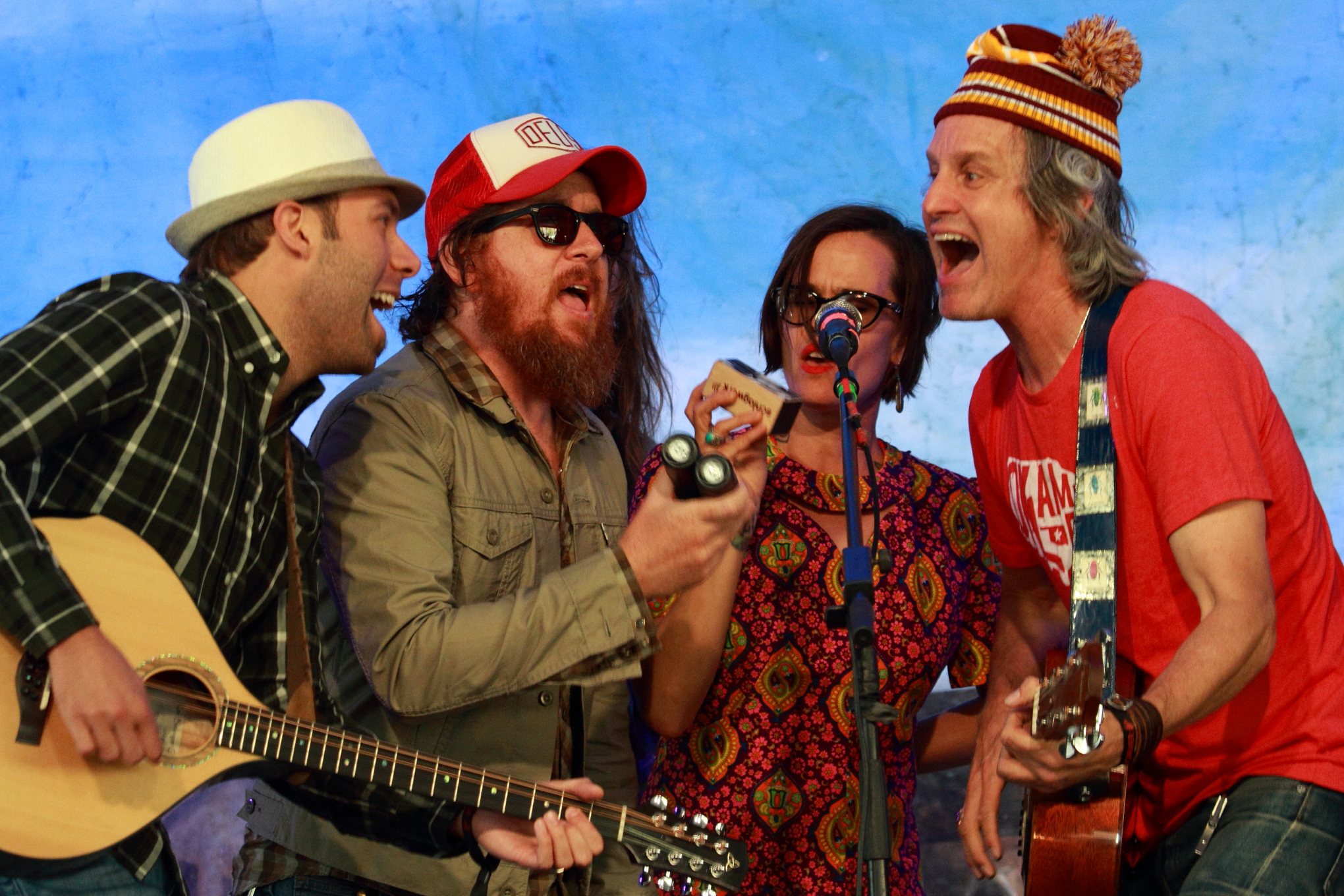 Another constant visitor Down Under is San Diego’s Steve Poltz. This was a second consecutive Blue Mountains fest for “Poltzy” and his 16th trip Down Under. He played on all three days, closing the Big Top on Sunday.

Steve Poltz is different. His bio on his own website begins: “To suggest Steve Poltz isn’t normal is about as safe a statement as one could make. You would basically require the powers of the Hubble telescope to locate Steve from any region of normalcy.”

A Steve Poltz show is a mix of music, stand-up comedy, improv and stream-of-consiousness commentary. Beneath the shtick and the weirdness beats a heart of gold. The top picture shows Steve with with members of Truckstop Honeymoon and The Once (from Canada), singing the Grateful Dead’s “Uncle John’s Band”. It was ragged, unrehearsed, thoroughly delightful. 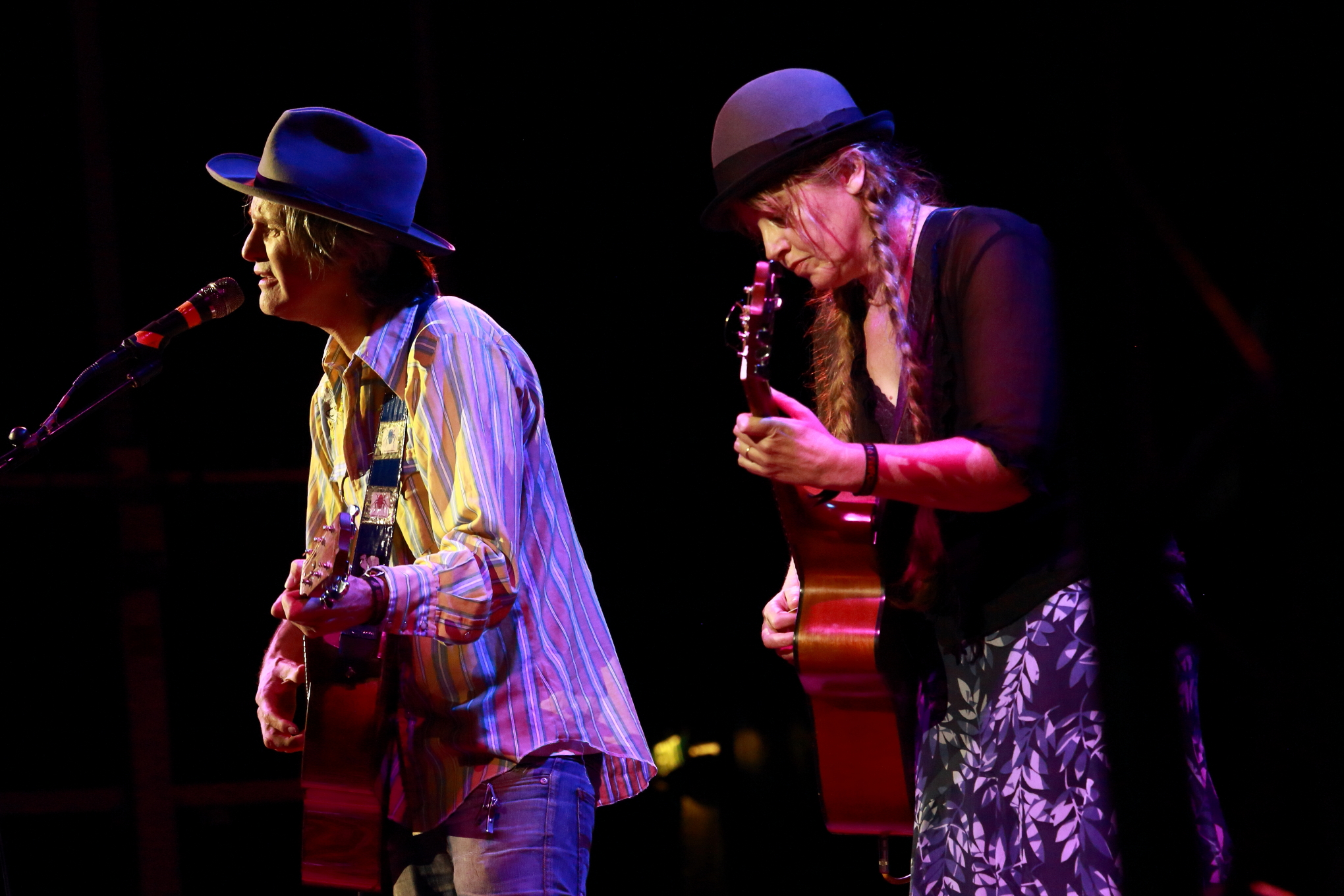 Poltz has spent enough time in Australia to master the (notoriously difficult) accent, and absorb many of our cultural idiosyncrasies. He uses it all to effect.

On Sunday, Anne McCue joined him for a beautifully reading of “Forever Young”. “I love Bob,” he said. “You know I love Bob Dylan. I think of him as America’s Paul Kelly.”

He related how he manouvred to meet Paul Kelly for breakfast in Melbourne, then lauched into Kelly’s classic “To Her Door.”

John McCutcheon was the first ever international guest at this festival, back in 1996, and made his first appearance here since 2010. He sings, recites, tells stories, and plays guitar, banjo, fiddle, autoharp, and hammered dulcimer. 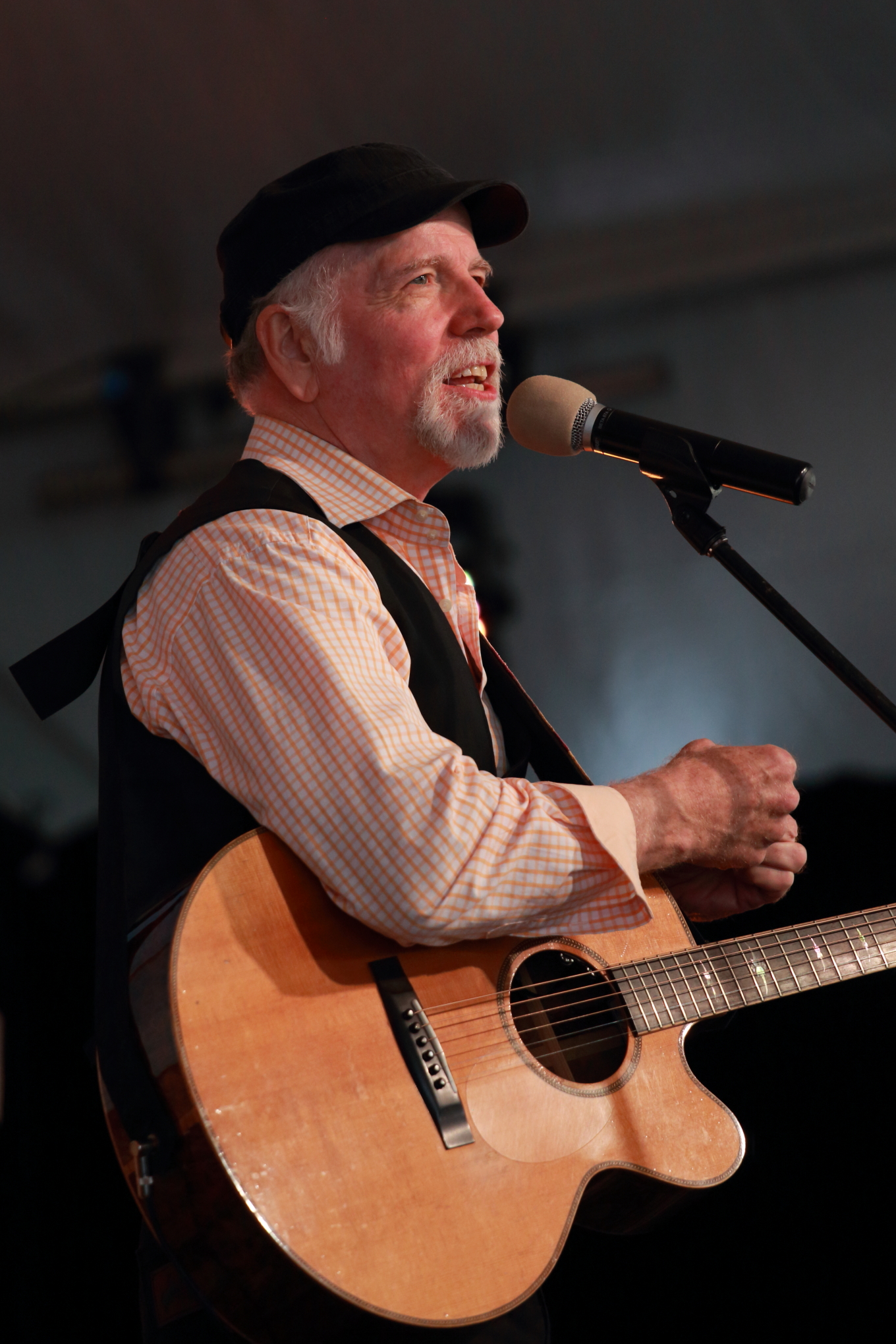 Even if McCutcheon didn’t invoke the name of his hero, it would be difficult to see him without Pete Seeger coming to mind. McCutcheon shares with Seeger a rich speaking voice that compels you to listen and is as much raconteur as musician. It’s a shame he didn’t get time on the big stage.​

(McCutcheon provided a memorable moment on Saturday, during the performance of guitarists Tony McManus and Beppe Gambetta. Gambetta is fond of telling banjo jokes which, as it turns out, are even better told with an Italian accent. Q: What’s the difference between a banjo and a hand grenade? A: None. If you hear the sound, it’s too late. So Gambetta is reeling off banjo jokes when, unknown to Gambetta, John McCutcheon walk through the rear curtain, banjo in hand, mock angry look on his face.)

McManus and Gambetta were superb. They concentrated on tracks from Round Trip, their first album together. As the title suggests, the music borrows from many cultures, from Ireland to Greece to the USA.

The curiously named Mountain Mocha Kilimanjaro were a standout amongst the rest. They’ve been on the festival circuit for some years, but first time here. It’s guys in suits and hats, playing slick, high energy, horn driven funk. From Japan.

They played to a relatively small crowd at the second stage on Sunday, but with the same energy they would give to a crowd of thousands.