Hard Working Americans make other people’s music their own

Todd Snider embodies the phrase hard work with his relentless work ethic and music that gives a nod towards the average Joe. When you add a pack of kindred souls to the mix then you get the Hard Working Americans (HWA). Comprised of Snider, Dave Schools (Widespread Panic), Neal Casal (the Cardinals & Chris Robinson Brotherhood), Chad Staehly (Great American Taxi) and Duane Trucks (Col. Bruce Hampton) these dudes were setting themselves up for something incredible or something god awful. Thankfully for us there is nothing god awful about this record.

HWA takes a collection of songs that are country, folk and Americana staples, deconstructs them before reassembling each tune in their own image. The first track on the album “Blackland Farmer” exposes the listener to what this record is all about. A Frankie Miller song that is built around a train track beat and Miller’s country warbling that sounds similar to Hank Sr., HWA turns it into a swampy dirty blues number filled with Staehly’s soulful keyboards and Casal’s grinding guitar licks. Snider’s gritty vocals bring Miller’s words to life creating a visual image of a hard day working the fields. Hayes Carll’s“Stomp and Holler” gets a southern rock treatment with pounding rhythms handled by Schoosl & Trucks and a mix of piano, guitar and harmonica that adds a bluesy, boogie woogie flavor replacing his Texas twang. They deliver a bare bones version of “Wrecking Ball” (Gillian Welch) stripping the song down Snider delivers a tune that is bleak and oozes despair. One of the more interesting songs on the record is Drivin’ n’ Cryin’s sing-a-long anthem “Straight To Hell”. A rowdy beer drinking put your arm around your buddy and belt out the lyrics kind of song, HWA has turned it into a mellow acoustic number that explodes at the end that really emphasizes Kevn Kinney’s lyrics. It is an entirely different look at a classic song. The record also includes original takes on “Welfare Music” (The Bottle Rockets) and “Mr. President Have Pity On The Working Man” (Randy Newman) but the best track on the record has to be “I Don’t Have A Gun”. HWA turns the Will Kimbrough/Tommy Womack song about bad situations that could be much worse into a laid back soulful groove.

There are so many times you see collaborations like this go bad because of such high expectations. I think what makes this work is not only the musicians but the songs. HWA handpicked a collection of established well written tunes and re-imagined them. They took the pressure of writing all new material and concentrated on making each song their own instead of just giving listeners a karaoke version. They don’t stray too far from the original versions but tweak them just enough to make a difference. I suggest you give the Hard Working Americans a listen and then go check out the originals. 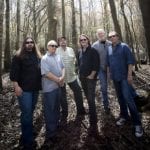 Jesse Dayton and the vicissitudes of stardom: a mystery