Despite being a regular reader of ND, I have to confess I don’t read everything. So the review of Hannah Aldridge’s album Razor Wire, a couple of months back, passed me by (I’m now ashamed to admit).

My wife and I turned up at the King’s Place concert hall in London on 23rd June to see Holly Williams (who was excellent, needless to say, playing a set centred on last year’s superb album The Highway). The gig was announced as an album launch for The Highway, despite it being out for a year. It was also listed as Holly playing with no support.

This suited us, because it’s a work night. We’re old enough to want to get home in good time and we do not see the gig as a prelude to a longer evening out. So we were slightly irritated to see that an unknown support named Hannah Aldridge had been added to the bill.

Nonetheless we settled down for her set when they announced she was due onstage.

A tall blonde blonde strolls out and plugs in.  As opening lines go “I miss you like morphine, straight to my veins…” is an attention grabber and as she plays through her opening song Lie Like You Love Me I’m quite impressed.

Many support acts start and finish with their strongest material, so for me it is the second song that is important, if I’m going to stay engaged. If anything the next song You Ain’t Worth The Fight is even better.

I’m interested now but it’s the fourth song Parchman that is the clincher. Based on the real life story of a woman who has been on death row in that prison for 25 years. A victim of domestic violence, she’d fought back. Hannah had seen a documentary about her and wrote a song. It’s one of those songs where you feel that tingle in your spine; the hairs stand up on the back of your neck. I now knew I had to buy the album.

So we find out Hannah was pretty much born with music in her veins, hailing from Muscle Shoals where her father Walt, was a musician and producer.

This leads into Black and White which is another killer. Hannah apologies for putting her two sad songs together, but there’s no need for it. They are great songs.

Finishing with Howlin’ Bones, in half an hour Hannah was gone from a total unknown to my favourite new artist.

There are many supports I’ve seen over the years where I’ve enjoyed the set, but have thought to myself  “If I buy that album will it get played more than once?”. There are no worries on that score. It’s been played about twice a day since then. Along with her mini-album Unplugged and Unraveled.

I’ve been trying to remember the last time I was so impressed with a support act. Maybe that was about 30 years ago when I saw Steve Earle as the guest of Green On Red.

Clearly we weren’t the only people impressed with Hannah’s set. The queue to buy her album was huge. I have never before seen so many people wanting to buy a support act’s merchandise. And she earned it.

The thing is she has so much talent she deserves much more, but with the way the business has changed it’s so much harder for people to make a living as a musician.

I’m sure Hannah is going to succeed in whatever way the business develops. I look forward to hearing more and seeing more of her in years to come. I’m just pleased that one day I’m going to be able to brag, “Yeah of course I saw her in her early days, when she played support…”.

She really is something special. Look out for her playing round your way. 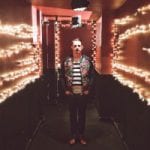