Hanging In The Balance Like A Puppet On A Hand: Bob Dylan and the Nobel Prize

“This is really a drag—and a bore,’’ the doomed jazzster Chet Baker tells director Bruce Weber in Let’s Get Lost, in response to (sympathetic) inquiries about his drug habits. The same could be said of the recent controversy over the decision to award the Nobel Prize in Literature to Bob Dylan.

In a certain sense, it all makes sense: the high-minded indignation from select members of the literary Establishment (though, some, like Salman Rushdie and Joyce Carol Oates, welcomed the decision), and disgusted repudiation of boomer nostalgia (we get it, Irvine Welsh) in other quarters. It’s of a piece with the kind of responses the hillbilly from Hibbing has received—and invited—throughout his career, amid his dizzying changes from folk prophet to insolent rocker, country crooner to Christian preacher, callow courtier to spurned lover and husband.

But it’s a category error—ironic for someone who’s made a career out of blowing up categories. Like Whitman, Dylan is large, and his work contains multitudes, including a multitude of complaints about his creative choices. Since fanboy prose famously comprises so much of the writing about Dylan, let’s dispose of the objections first.

On the face of it, his two published books aren’t much. His 2004 memoir, Chronicles: Volume One, has its charms, including an engaging account of his early days in Greenwich Village and some amusing diversions, including an encounter with the wrestler Gorgeous George. But it has a tossed-off quality, especially in comparison to more considered treatments of similar experiences by Patti Smith (or contemporaries like Dave Van Ronk). It also has a performative, self-regarding aspect that works for Dylan’s albums and concerts but not here. (He has admitted he could have used an editor for the book, and it’s hard not to agree.) And an earlier effort, Tarantula, is a virtually incomprehensible speed rap written immediately before the motorcycle accident that caused him to slow down and take stock.

The Nobel Committee defended the choice as part of the oral tradition, citing Sappho and Homer, though they could just as easily have mentioned the Bible, or Muhammad Ali. Those who dismiss Dylan as “just a songwriter,’’ though, ignore the fact that words are hard-baked into the job description. The fact that his lyrics are strewn with literary references is an interesting detail, but it’s more of an excuse than a reason. When Dylan snarled, “You’ve been through all of F. Scott Fitzgerald’s books,’’ he was more interested in pouncing on the author’s middle name for emphasis than offering an academic assessment of The Great Gatsby. And his throwaway line about “Ezra Pound and T.S. Eliot fighting in the captain’s tower’’ was just a set-up for a (too) easy, false pastoral contrast: “While calypso singers laugh at them and fishermen throw flowers.”

He has said Blood on the Tracks was inspired by Chekhov stories, but this is almost certainly another piece of misdirection by this master shape-shifter. It’s a break-up album that puts other accounts of the war between the sexes [including those by Philip Roth, the name put out by many hoping the award would go to a “real writer’’) to shame. Roth’s own work is a virtual festival of misogyny; it’s hard to name a single character outside the narrator/author who comes to life in much of his fiction.

A similar critique could be leveled at Dylan, of course. After the death of Suze Rotolo, the woman he appeared with on the cover of The Freewheelin’ Bob Dylan I wrote a piece for the website obit-mag.com, that said, “It’s past time to admit that the poet who denounced the masters of war is himself a master of misogyny. From ‘Blonde on Blonde’ to ‘Blood on the Tracks’ it’s obvious that the dude has issues, as they say, with women.’’

Of course, the “Bobolaters,’’ as Ron Rosenbaum has termed the obsessed fans who follow Dylan’s every move, eager to pick him up each times he falls, jumped to the bard’s defense, even though it’s historically clear he has a nasty left hook and knows how to take care of himself in the clinches.

Thinking about it again, I’d temper the critique. Few have matched the lyric loveliness of “Girl From The North Country’’ or “If You See Her, Say Hello.’’ And even the unbridled anger of “Idiot Winds’’—there used to be a YouTube video kicking around of a bandannaed Bob spitting it out like a curse at a concert in Fort Collins, Colorado—is as much a statement of self-hate, wrong turns, and unresolved regrets than a way of getting back at a lost love.

Like any great artist, Dylan has written bad tunes, of course (“Wiggle Wiggle,’’ anyone?). But like others who work at the craft, he also has a surprising capacity to keep at it, make changes as necessary, whether he is rearranging the songs in concert or playing with different versions. Folksinger Lucy Kaplansky does a lovely version of “Every Grain of Sand’’ on A Nod To Bob 2, a collection of Dylan covers. (One of the reasons I love it is that you can actually make out the lyrics; anyone who says his later work doesn’t match up needs to listen to this tune’s inspired, Blakean cosmology).

The second verse reads, in part:

Like Cain, I now behold this chain of events that I must break.
In the fury of the moment I can see the master’s hand.
In every leaf that trembles, in every grain of sand.

The close rhymes work to building effect, reminding you of when Hattie Carroll “got killed by a blow, lay slain by a cane.’’

But one phrase always bothered me, churlishly, about the tune. In the final verse, Dylan writes, tellingly:

I hear the ancient footsteps like the motion of the sea
Sometimes I turn, there’s someone there, other times it’s only me.

But then he goes on:

I am hanging in the balance of the reality of man
Like every sparrow falling, like every grain of sand.

“The reality of man?’’ Huh? This is overly abstract high school stuff, in a song that is otherwise the work of an artist at the top of his game. But trolling around YouTube, I found another version, only slightly changed but it made all the difference: “I am hanging in the balance, like a puppet on a hand.’’ Looking for an objective correlative? Take that, Mr. Eliot!

I don’t have anything to say to those who are indignant at the Nobel award. As Grace Paley has put it, “I never argue when there’s real disagreement.” But I did get a kick out of Bob’s eloquent silence when the news was announced: he was playing a gig in Las Vegas. The Dude abideth.

This piece was originally published on the websute for the San Francisco-based literary magazine Zyzzyva.org. 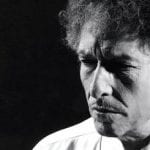