We’ve got a special guest blog today from travel writer Melissa Rae Cohen, writing all the way from Portland, Maine about the great roots music in her hometown!

I grew up in a very musical environment. My father and grandfather used to sit at the foot of my bed crooning Tex Ritter’s “Blood on the Saddle” every night. A rather ineffective lullaby, their rendition (which changed the word “saddle” to my name) usually threw me into giggle fits, as opposed to lulling me to sleep. My father was a touring musician and worked as an engineer for some of the coolest acts of the 90s, and my papa would later be inducted into the Maine Country Music Hall of Fame. I was surrounded by my family, their friends, band mates, and fellow artists, and I can barely recall a minute where there wasn’t some kind of music filling the air.

This was my first introduction into the local music scene of Portland, Maine, which was alive and thriving long before I was even a twinkle in my mother’s eye. Naturally, I became involved in music myself. I am happy to report that the scene is still booming in the city today. Some of the most amazing folk, blues, country and bluegrass music I have ever had the privilege of hearing is being made right in my home town. Here are a few of the acts you should check out should you find yourself on the east coast. 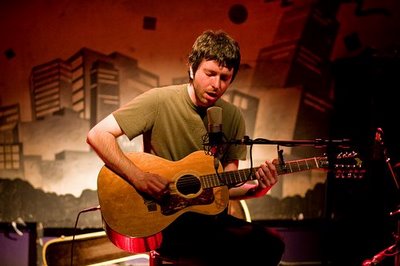 Ex-punk rocker turned folkie,  Micah Blue Smaldone is nothing short of amazing. I first heard this artist from the seaside town of Kennebunkport about eight years ago when he opened for Texan songstress Jolie Holland on her Escondida tour. He had just released the album  Some Sweet Day, a rag-timey masterpiece. His sound has since taken a more mellow turn, reminiscent of the 1960s British folk revival. He is not currently on tour (as far as I know), but keep an eye on his MySpace page, because you won’t want to miss his big return. While you are there, you can listen to a few more of his songs.

Smaldone got his start in  The Pinkerton Thugs back in 1994. The band is still together, sans-Micah, for those interested in the punk genre. He went on to form the hardcore band Cops and Robbers before making a drastic change in style with the solo release of Some Sweet Day. He has since released Hither & Thither (2005), Live in Belgium (2007), and most recently, The Red River (2008). You can also hear Micah with  Fire on Fire, another local outfit whose records you can pick up from  Young God (home to Devendra Banhart and Wooden Wand). No word on when we will be hearing more from him, but I hope it’s soon.

One of my all time favorite folk bands, husband and
wife team Buck and Shanti Curran have been performing as Arborea since 2005. They have reached considerable success, performing world round with the likes of Meg Baird and Vetiver, and have been featured on the stages of Wales’ ever popular Green Man Festival (alongside Joanna Newsom, Vashti Bunyan, Six Organs of Admittance and Alela Diane, to name a few). Their 2011 album  Red Planet  was named “Best Under the Radar Album of 2011” by Rolling Stone, and they have also been featured at SXSW. You can stay updated on their whereabouts via their Blogger, but if you visit Portland during the summer, you are almost certain to catch an intimate Arborea performance free of charge. They have quite a few shows in the area during the next couple of months, as well as shows booked in Texas, Pennsylvania, Massachusetts, Rhode Island and Virginia. Red Planet is definitely their most critically acclaimed and popular recording, but personally, I am rather partial to 2009’s  House of Sticks. I also recommend checking out  Leaves of Life, a compilation that Buck Curran put together to benefit the World Food Programme.

The Jerks of Grass

Guaranteed to delight any bluegrass fan, whether their tastes are old timey or modern, the talent behind the Jerks of Grass is undeniable. Performing both classics and originals, this outfit has been gracing the stages of Portland, Maine every Thursday for years, in addition to other regular performances and festival appearances. They are currently spending Thursday evenings at  Bayside Bowl, despite their lead singer/guitarist taking off for a few months to hike the Pacific Crest Trail. (Follow his adventures online at  http://jasonhikes.com). For the full effect, I really recommend planning your travels around Jason’s return. They are marvelous even in his absence, but his guitar skill and speed are unsurpassed.

Though the band was originally formed over a decade ago, they only have one album! 2008’s  Come on Home was recorded live and really represents what you can expect to hear from these guys (and girl!) on the stage. So, if you don’t get a chance to catch the Jerks of Grass in the flesh, at the very least do yourself a favor and pick up a copy of Come on Home as soon as humanly possible.

The Jerks of Grass on local Portland television program:

Dapper blues man Samuel James has been rocking the socks off of locals for some time, and has blown up internationally, touring the globe and delivering the gift of song far and wide. Rolling Stone France has even labeled him the “guardian of lightning.” Despite his success, James still puts on a hell of a local show on a fairly regular basis. You may be able to catch his act in your home town, but if you can make it to Portland, you will be in for a real treat.

His performances are unique in that he is seldom backed by a band, but still manages to make a big sound. Acoustic, electric and steel guitars are accompanied by the tap-tapping of hard soled shoes, the harmonica, and a voice well beyond the years of the body it emanates from. One of my favorite things about Samuel James is that he is a storyteller. Not since the singer/songwriters of the sixties and seventies have we been privy to such tales spun into song. This is not your run of the mill “blues rock” artist. James is a true blues man through and through, and his sound will appeal to aficionados young and old.

Not only is Samuel James an impressive performer, he is also a heck of a nice guy, so don’t be shy if you want to shake the man’s hand after a show.

Here he is performing Blind Boy Fuller’s  Stranger Blues at one of my favorite Portland venues,  One Longefellow Square.

I could go on and on forever about all of the great acts that Portland, Maine has to offer, but you really just have to come and see (or hear, rather) for yourself.