Upside-Down Town is the latest release from singer/songwriter Greg Trooper. This is Trooper’s first studio recording of new material since his acclaimed Dan Penn produced CD Make It Through This World. This time Trooper co-produced the album with Stewart Lerman (Jules Shear, Marshall Crenshaw, Boardwalk Empire) and Kevin McKendree (Delbert McClinton). Trooper’s lyrics speak to everyone as they umbrella themes of love and loss, dreams deferred, reconciliation and finding peace.

He’s joined on this record by some of the most talented musicians Americana music has to offer including Kenneth Blevins, (John Hiatt) on drums Kevin McKendree, (Delbert McClinton) on keyboards and guitars, and David Jacques (John Prine) bass, as well a host of guests including Trooper’s son Jack on drums for three of the tracks.  It’s a jumpin’ little record.

Greg Trooper is a songwriter and performer who deserves about 12 times the attention he’s received. He knows how to play rock against country and folk and position the pressures of adulthood against the longing for adolescent freedom. — Dave Marsh

Greg Trooper’s roots-rock can lean toward soul or country or Dylan, and it’s filled with yearning and promises. — Jon Pareles (New York Times) 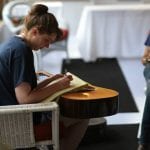 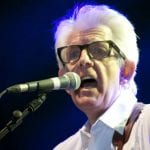 Glastonbury Festival 2014 – A Review of the Smaller Stages