The latest CD from a reborn and strengthened Grasstowne uses the current road band on all cuts, a good decision on the part of partners Alan Bibey and Steve Gulley who remain at the core of this excellent band. “Kickin’ Up Dust

”, released by Rural Rhythm Records, exemplifies all the strengths this band brings to bluegrass music. As always in a Grasstowne recording, listeners can find Steve Gulley’s soulful tenor voice and impeccable timing, as well as his frequently in demand harmonies, here employed in his own band. Alan Bibey remains one of the most elegant and tuneful mandolin stylists around. His mandolin style is distinctive enough to be recognized as Bibey style – smooth, articulate, and clear as glass. 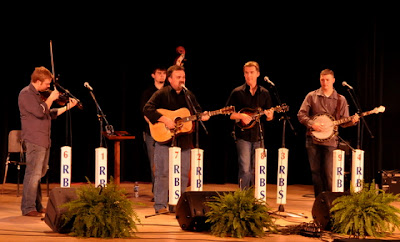 Blue Rockin’ Chair (Chris Stuart, Janet Beazley) is a sad story song set in the Louisiana lowlands, the world of sugar cane and share cropper cabins. The rockin’ chair sits on the porch as floods and tribulations take the children away from an old man sitting and rocking while the world changes around him. Justin’ Jenkins banjo sets the tone behind Alan Bibey’s vocal, which captures the loneliness and desperation of the singer. The final notes, with Steve Gulley’s harmony tell of the end of a way of life.

Up in the Wheelhouse is a Bibey original instrumental he wrote in California a few years ago with a title nod to the television show “The Deadliest Catch.” It opens with one of Alan’s blinding mandolin solos, followed by breaks from Jenkins and Adam Haynes on fiddle. The song is a showcase for Bibey’s unparralled skills, filled with slides and clear-as-a-bell hammer-ons. A characteristic of his picking is imagination and virtuosity that looks easy but captures sounds and effects other mandolin players can’t even begin to come up with. While recognized three of the last five years at SPBGMA as mandolin player of the year, Bibey’s virtuosity, style, and taste has somehow eluded the membership of IBMA when it comes to awards. Grass Stain is a delightful instrumental written by Adam Haynes in the style of Kenny Baker. The song gives Adam, a distinct and important addition to this band, the opportunity to shine on one of his own composition. 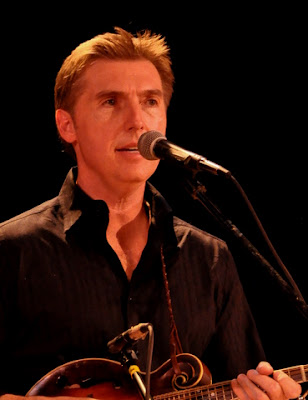 I Don’t Worry About You Any More (Loren Rogers) takes a bow to Steve Gulley’s Dad, a veteran of many years at the Renfro Valley Barn Dance and the house band he played in there. This is a lost love song that hearkens back to the day when there was no bright line between bluegrass and country music, a time Grasstowne often celebrates in its music. Listen for Adam Haynes simple, yet elegant, fiddle break which epitomizes this earlier day. Justin Jenkins, one of the best Crowe-style banjo pickers around is delightful with his banjo backup in this one. Gulley’s voice, as always, captures just the tone he wants to project in this song. 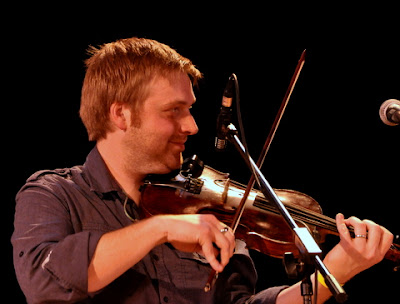 Kickin’ Up Dust (Wes Golding) has waited ten years for Alan to record it, but it’s a worthy song to be chosen as the title cut for this CD. “I might be a south freight/Headin’ Georgia bound./You can hear my whistle blowin,/As I’m leavin’ town./From the back of a fast horse/ Tenbrooks is his name/ Kickin’ up dust, throwin’ up gravel/ and hittin’ that lost highway.” This is a new/old bluegrass “I’m Leavin’ Town” tune with all the ingredients. Steve Gulley’s voice captures the freedom and loss simultaneously while Justin Jenkins’ banjo is always and insistently there. Often the real life experiences we see and hear about become the material for a song. Steve Gulley writes in the liner notes that Somewhere between Givin’ In and Given’ Up was inspired by a family matter. The experiences for the family may have been painful and difficult, but for the listener they create a haunting song about loss and pain.

is the best piece of work Grasstowne has produced. The CD contains five songs by Bibey and 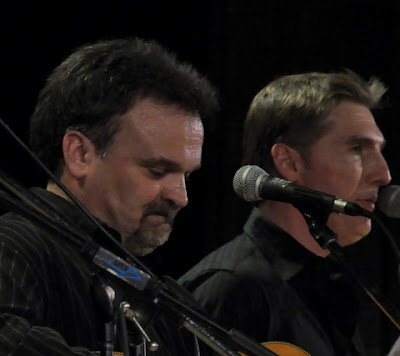 Gulley as well as one by Adam Haynes. Covers are well chosen from music long loved by one or the other of the principals. It was produced by Steve Gulley and Alan Bibey along with Wes Easter at Easter’s studio and Alan Bibey’s studio on Rural Rhythm Records. All songs on the CD are played by the current members of Grasstowne’s touring band with no guest appearances. Both the instrumental and vocal work is of the high quality we’ve come to expect from both Alan and Steve. The addition of Justin Jenkins on banjo, one of the rising young Crowe-style banjo pickers, and Adam Haynes, who’s played with some of the best, help forge a new and pleasing sound for this band.

(Too Many) Tracks Of My Tears