Graham Nash, Kasey Chambers, and Other Roots Music Photos of the Week

It’s that time again to feature some of what ND’s fine photographers have posted during the past few weeks. However, first, I’d like to share some thoughts on seeing a legend last week.

What becomes a legend most? Graciousness.

Last week I had the privilege of spending an intimate evening with Graham Nash at Stuart’s Opera House, an even more intimate venue in Ohio. While it was mostly an older-than-usual audience, the songs and stories did not feel dated. They were sung and told without hints of nostalgia, but rather in a timeless manner, a history of our lives.

Songs new and old, with three glorious covers: “A Day in the Life,” “Blackbird,” and Neil Young’s “Ohio,” which had the audience, most of whom were old enough to have been there, forcefully singing along (“Four dead in O-H-I-O”) and drew the largest of many ovations.

Favorite stories from Nash: Renting a Rolls Royce for the day (with a driver), dropping acid and then visiting Stonehenge and Winchester Cathedral; how the sighting of a playful blue whale during a nine-week sailing trip on David Crosby’s boat from Florida to San Francisco resulted in “Wind on the Water;” and how, after brunch on an uncommonly dreary, chilly day in LA, Joni Mitchell bought a vase in an antique shop, and upon returning home Nash said, matter of factly, “Joan, I’ll lay a fire and you put some flowers in the vase you bought today.” You could tell those were happy days indeed. And, on the morning after the breakup, “A Simple Man.”

Favorite songs: The underrated “King Midas in Reverse,” which I have always considered a pop masterpiece; a searing, scorching “A Day in the Life” that featured the superb talents of Shane Fontayne, who had the orchestration part down pat on just a guitar, and how much Nash sounded like John Lennon; “Chicago” and “Ohio” (which was not on the setlist) back to back, especially affecting as Kent State is not far away, and for me personally as I was on the nearby Ohio University campus the day that happened; “Our House,” of course; and sending us off into the night, uplifted, with, what else, “Teach Your Children,” featuring Fontayne on electric lead beautifully replicating Jerry Garcia’s steel guitar. Nash also had the audience sing the chorus sveral times a capella.

During intermission, I had a short conversation with Nash (and Fontayne), where he talked about a recent visit to Chad Kassem’s Quality Pressing plant in Kansas. Nash said he was unaware of how records were made up until then. When I noted Gillian Welch’s Harrow and the Harvest LP was pressed there, he spoke of his admiration for her and Rawlings. Nash was grace personified.

While I will let the photos by Brenda Rosser, Kevin Smith, Michael J. Smith, Peter Dervin, Kirk Stauffer, Chad Cochran, Michelle Stancil, Boom Baker, C. Elliott, Steve Ford, DT Kindler, and Gary Stoller speak for themselves, Rosser’s photos of Kasey Chambers and her father, Bill, are especially noteworthy. First, because Chambers does not tour the US very often, and, second, because when I first saw Chambers (her first or second US tour), her father was in the band and we hung out together. That show was the last one on the tour, and while Kasey was returning home the next day, Bill was staying on, saying, “Hell, I’m headed to Nashville for a couple of weeks.” 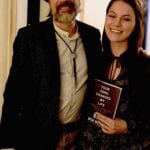 Bob Boilen’s “Your Song Changed My Life” with John Paul White, My Bubba, and Adam Torres