So, who is Jason Moran, really? Well, seems he took his MacArthur “genius” Fellowship and began messin’ with folks, in his latest musical project.  For part of the show, he transforms into the Harlem Renaissance pianist-singer-songwriter Fats Waller, wearing a giant caricature head.

If you go, and shout out something about his head getting too big, he’ll be asking for it, with that get-up. But he might just grin and say “Yo’ feets’ too big!” as Fats would have, in one of his most famous songs.

There’s actually a modest yet purposeful tone to his reflections on the touring project, which reportedly supports an upcoming CD of the show’s take on Waller. “It’s not really jazz, per se,” Moran said of the music, in an NPR interview with Janaya Williams. “It’s dance music. It’s club dance music. If you go to a club in the Village or Tribeca (in New York) or somewhere, this might be what you hear in the club pumping over a sound system. So it’s not jazz.”

Moran points out that Waller was a regular in clubs and speakeasies back in his day, and that some of his lyrics fit right in with today’s club music. “Fats Waller has his really crazy things that he says in his lyrics, too, about thugs being in the crowd, you know, ‘Put that gun away’; he says stuff like that,” Moran says. “It’s almost like those clubs that he was in were as roguish as some of the clubs today.” 1

That sounds like Moran, who’s also The Kennedy Center director and advisor for jazz, and will host a big multi-artist event at the Washington venue in May 4-11. * He’s also among the first jazz musicians to incorporate hip-hop into their music, notably on his excellent 2005 Blue Note album Same Mother, which thematically contemplated “Gangsterism on the rise.”

He’s also worked in multi-arts contexts, and is a collaborator. The giant papier-mache Waller head was designed for the show by Haitian artist Didier Civil. Moran conceived and first produced the Waller show in Harlem in collaboration with noted genre-bending bassist/singer Meshell Ndegeocello, who unfortunately will not be part of the South Milwaukee performance. Trained local dancers will hop-step to Moran onstage, though not those depicted in the photo at top (courtesy chicagotribune.com).  Singer Lisa E. Harris will handle the vocals here, accompanied by Moran and his band.

Milwaukee-area trumpeter Jamie Breiwick will open the show with a group of Milwaukee and Chicago musicians playing all original material. 2

But the party’s designed to get people up off their feet, so bring your shoes for dancing in the aisles. In a 2011 NPR interview Moran spoke of the germination of the project to arrange Waller’s music for a dance party. It was “just to kind of put it back in the mind that Waller is dance music as much as it is concert music,” Moran says. “For me, it’s the recontextualization; what is the functionality of the music anymore? In music, where does [the emotion] lie? Are we, as humans, gaining any insight on how to talk about ourselves and how something as abstract as a Charlie Parker record gets us into a dialogue about our emotions and our thoughts? “Sometimes we lose sight that the music has a wider context,” Moran says. “So I want to continue those dialogues. Those are the things I want to foster.” 3 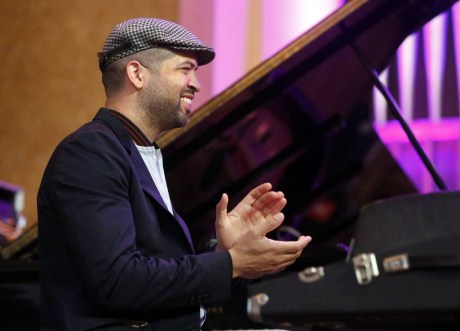 One senses the earnestly penetrating thought behind this interesting career turn, which skeptics might presume as little more than commercially motivated. Moran is one of the most impressive, ingenious and culturally-attuned musicians in jazz today, qualities which have earned him widespread acclaim including a MacArthur “genius” Fellowship. The pianist-composer’s jazz influences include Thelonious Monk, Duke Ellington and Andrew Hill, and now clearly, Waller.

Moran’s last two CDs, TEN and the soulful duo album Hagar’s Daughter with saxophonist-flutist Charles Lloyd, were among the best jazz recordings of their respective years. Moran’s current show evokes the great stride pianist-entertainer in his prime era, the 1920s and early ’30s. And yet, this show is Waller updated with “rhythms coming out of 1960s-and-beyond dance music: Motown, house, hip-hop,” according to New York Times jazz critic Ben Ratliff.

The Harlem Renaissance allowed urbane African American arts to flourish, and nobody did it with more flair, wit and virtuosity than Fats Waller. So party-goers might find themselves stepping into an easy speakin’ and jivin’ past, but find it all striding and hip-hopping to the present.

Here’s a teaser video for the show

This blog was originally published at Culture Currents (Vernaculars Speak) at www.kevernacular.com

* Moran’s Waller Dance Party is also scheduled for 7:30 p.m. May 3, at Miner Auditorium in the SF JAZZ Center in San Francisco, with Nedegeocello. https://www.sfjazz.org/events/season1/fats-waller-dance-party

2 In South Milwaukee, besides Moran on piano and Harris on vocal, Moran’s band includes Leron Thomas on trumpet, Joshua Roseman on trombone, Marvin Sewell on guitar, Tarus Mateen on bass and Charles Haynes on drums.