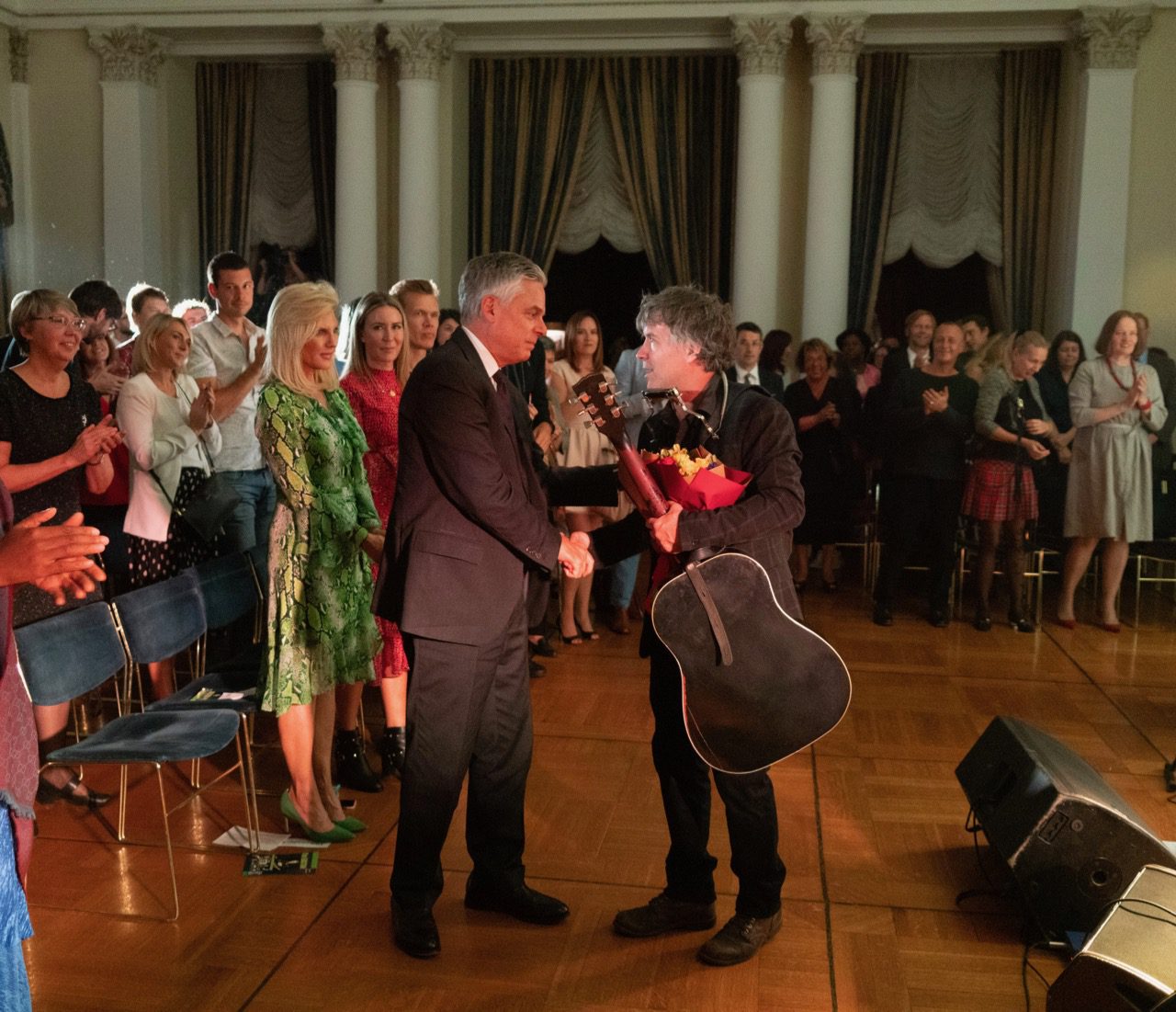 Tim Easton shakes hands with US Ambassador to Russia Jon Huntsman Jr. at a performance at the ambassador's residence, Spaso House, in Moscow. (Photo by Stefan Mizha, Courtesy of US Embassy Russia.)

Every big city is the same to me. There is an abundance of concrete, lots of traffic, tourist attractions, and the ability to get anything you want at all hours of the day. Moscow has all of that plus faster and louder motorcycles, and more cafes, clubs, museums, and millionaires than this troubadour had time to take in in two days. I did make it to Red Square, which was a two-mile walk from my hotel. On the way, I passed statues of the great Russian poets like Chekhov and Mayakovsky, along with a statue of Mikhail Kalashnikov, who invented the famous machine gun. There, with the full moon approaching as I walked the massive streets, looking for the soul of Moscow, a poem began to form in my mind about whether or not words were, in fact, more powerful than bullets.

I was in town to perform at the American ambassador’s residence as part of my assignment with the Forum for Cultural Engagement. The landmark building is known as Spaso House — a majestic, Neoclassical structure from 1913 that is most famous for being the setting for the wild party scene in Mikhail Bulgakov’s surrealist novel The Master and Margarita, which I happen to be currently reading. The novel’s climactic party scene is based on an infamous Stalin-era gala that Bulgakov himself attended and that reportedly was quite the wild evening, involving drunken bears and the like. The novel is full of Russian social satire and is therefore beloved by many citizens here.

Spaso House lived up to its reputation as being a luxurious space. The largest chandelier in Russia hangs over the ballroom, and the halls and walls are adorned with photographs of famous visitors and expansive paintings of American landscapes. Right after soundcheck, I met the upstairs residents, Ambassador Jon Huntsman Jr. and his wife, Mary Kaye. They are from Utah, where the ambassador was once the governor (and campaigned for president in the 2012 election), and have seven children, including one daughter who was adopted in China and another who was adopted from India. Huntsman was also the ambassador to China during the Obama administration. Outside of Spaso House in Moscow.

Nixon and Brezhnev once broke bread at Spaso House, as did Reagan and Gorbachev. Many famous musicians, including Ray Charles and Chick Corea, have entertained the guests there. This was basically the fanciest house party I’ve ever played, exquisitely catered by the Italian house chef, who has held his post for over 40 years. The audience was full of diplomats from several different countries. Security was tight, to say the least.

Earlier that day, I had gone to Red Square and recorded a video of me singing “Peace of Mind,” which is an original song that basically espouses the creed of the pacifist (see video at the end of this post). I had also posted about my activities on Instagram and mentioned there that I did not get arrested. When I brought up my visit to Red Square with Ambassador Huntsman, he said: “Yes, I saw your Instagram post. You know if you did that in Tiananmen Square in China then you would definitely be arrested.” He also happened to have read the first installment of this column, published last week by No Depression. So if the Russians weren’t really watching me, it was interesting to know some Americans definitely were.

The evening’s performance went well, with me playing solo and then joining the Russian fusion band The Roman Miroshnichenko Trio in order to symbolize America and Russia working together. Some laughter was even heard among the crowd when I introduced my song “Don’t Lie” as “a great song for children, and diplomats too.”

This was Huntsman’s last cultural exchange event as our ambassador to Russia. He recently turned in his resignation and will return home in October to begin another chapter in his public life. All are awaiting news of the next nominee for ambassador to Russia, who most obviously has a challenging job ahead as we enter another election year.

One thing I know is that every single night when I play music for the Russian people as a representative of American folk music, I mention that it is an honor to be invited to their country to sing songs. I also wish them peace and love. Some say this is the most dangerous message one can have, but we practitioners carry on regardless. Poets write about this very thing all the time and we chose to read or ignore their words. Sometimes we read them and still ignore the message. Here’s the revolutionary poet Vladimir Mayakovsky in “Call to Account” from 1917, the year of the Bolshevik Revolution:

“What is above the battles’ sky —
Freedom?
God?
Money?
When will you stand to your full height,
you,
giving them your life?
When will you hurl a question to their faces:
Why are we fighting?”

Singer-songwriter Tim Easton is visiting and playing music in Russia this month with the Forum for Cultural Engagement, in conjunction with the US State Department. This is the second of four weekly dispatches for No Depression on the people he meets, the music he hears, and the things he learns along the way. You can read the first column here.