From Nottamun Town to Masters of War

Liner Notes ~ An Occasional Blog of Little-Known Mind-Blowing Facts About The Life and Work of the Late Great Jean Ritchie.

One of the most fascinating stories of my time spent working with Jean Ritchie on our tribute show was the story that Jean revealed to me in a casual aside one afternoon when we were preparing to go on the radio together for a live interview near State College, Pennsylvania.  We were in rehearsal for the stage show at Penn State’s Centre Theatre.

I was talking about Bob Dylan and Jean told us the first of two amazing things: in April of 1963, Izzy Young, who ran the Folklore Center in the Village, had organized the Dylan concert at Carnegie Hall. Izzy begged Jean and her husband, George Pickow, to come to the concert because with Dylan being an unknown, Izzy was frantic to find an audience for the concert. So they went, and, as Jean’s husband George related to us, they were mostly underwhelmed at this scruffy, nervous, unprepared and mumbling singer up on stage. They didn’t think much of him until one day (and this is the second and most amazing thing), Jean noticed that a new song by Dylan sounded pretty familiar. It was “Masters of War.”  The melody had been copied from one of Jean’s family songs, her family’s version of the traditional ballad “Fair Nottamun Town” which appeared on her album Mountain Hearth and Home. An article in the book Baby, Let Me Follow You Down: The Illustrated Story of the Cambridge Folk Years by Eric von Schmidt and Jim Rooney explains how the singer Jackie Washington heard Nottamun Town from Jean, did his own version at Gerde’s Folk City, and it was heard by Bob Dylan:

The lyrics of the two songs are of course are wildly different, but sung side by side, it’s unmistakable. Dylan was known for grabbing up what he heard and saw around him, and this is just what he did with Jean’s song. It was used to create what is arguably referred to as one of his masterpieces.

That afternoon in Pennsylvania, Jean had said simply that Dylan used one of her melodies to create Masters of War but for the life of me, I couldn’t place which one he had used – so I quickly thought to ask her “which song of yours did he use?”  She laughed and as she drove off into the afternoon she smiled and said “Nottamun, Susie!”

About the song from the liner notes for Jean’s album:

“A piece of folksong surrealism,” is how Jean describes “Nottamun Town,” dreamlike in its disorienting juxtapositions: “Ten thousand stood around me, and yet I’s alone….” The family could trace their knowledge of the song back to Crockett Ritchie; according to Uncle Jason, “‘hit’s might neart sure to be about Nottingham in Old England.'”

The song was likely a product of the early mummers’ plays, in which local actors would blacken their faces and turn their clothing inside out to escape recognition. Bob Dylan was not only influenced by the song’s jumble of mixed-up, fantastical lyrics… but also melodically, as he borrowed the tune for Masters of War. 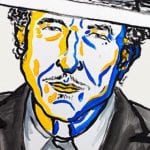 Who Will Read Bob Dylan’s Nobel Speech Tomorrow in Sweden?