Between Richmond Fontaine, The Delines, and his own work, it’s been one hell of a year for Freddy Trujillo.

This video premiere for his new single “Little Birds” continues that run. The single is from his album Amexica – a “rock and roll ode to Chicano identity” as the trailer describes it. Or, as Willy Vlautin of Richmond Fontaine and the Delines puts it, “Freddy’s Amexica is one of my favorite records of the last couple years.”

“Little Birds” is the second single from the album. It’s a departure from the first single “Atzlan,” indeed the two songs have been described as “book ends to the different styles [in the album]” and on first listen you’ll get that immediately.  “Atzlan” is funk-bass-heavy, fuzz voiced, political. “Little Birds” on the other hand is light and warm. Written about his children it has a blue sky background, an easy voice, a melodic promise of sweet and safety.  The political is personal with his little birds.

Trujillo’s music explores his Native American and Chicano heritage and the video illustrates this clearly, showing his children at Pow Wow in traditional clothes. “I wanted something that they would be naturally doing in their lives, and Pow Wow is something that their mom has shared with them since they were tiny.”

Despite all this though, at points the video has a dark look to it, there’s something heavy brooding in there. “Yes there is a definite darkness to it” Trujillo agreed. “When I was writing the tune it was a time of self-loathing. That was one of those songs that definitely fell into my lap as a result.” The loss of a close friend and band member had hit hard and also scuppered a lot of plans. “It is tough for me because music expression is my antidepressant and always has been. It has gotten me out of tough times. This was one time that I felt like calling it quits because I have children now. At least I started questioning it. Instead I wrote them a note that they would hopefully understand later in their life. A tune and now a video to tell them that I loved them.”

There is another, much more obvious element to the song though. “I was stoked how many actual bird facts I was able to incorporate” he was keen to tell me. Turns out Freddy Trujillo has some ornithological tendencies. “I’m a huge bird watcher. Since I was a kid I’ve loved birds. Especially birds of Prey.”

Amy Boone of the Delines knows all about Trujillo’s strange birding inclinations. “I feel like I should be taking notes when I listen to Freddy talk about music, especially on those long van rides” she told me. “He knows so much about the history of modern music. He also loves bird watching. Freddy should have his own show where he takes musicians out bird watching and chats about music; I think he could pull off a really good interview.”

She’s also a big fan of the song in question, as her story of a recent UK tour illustrates. “The Delines had a day off in Manchester, (a rare and dangerous occasion) and The Lost Brothers took us to an Irish pub. We got really polluted and the owner came out and sang a ballad for us. A guitar got passed around and Freddy played that song, and I just sat there drunk and tired and crying … I guess it just tugs on my heart strings to hear him sing that song.”

Delines and Richmond Fontaine founder Willy Vlautin is a fan too. “Little Birds he wrote for his kids and it’s a song I always play at home. To me it’s a perfect song.”

As bass player for Richmond Fontaine, Trujillo has spent a fair slice of 2016 travelling the planet on their farewell tour. Indeed, the band enjoyed saying goodbye so much in the summer past that they are about to depart on another tour to make sure they didn’t miss anybody.

“Richmond Fontaine is just waiting to go back to Europe in October” he explained, and certainly, whether at home or abroad, they don’t seem to have stopped travelling and gigging since spring. Some shows however have been more standout than others.  “We just opened up for Willie Nelson” Trujillo told me.  “It was a real treat to watch Willy Vlautin all star struck.”

Still, if truth be told, it sounds like Mr. Vlautin wasn’t the only star struck critter on the night.  “I got to take a picture with ‘Trigger’ Mr. Trujillo boasted, and then fanboy went home and searched out his LPs. “The other day I was looking at the album of [Willie Nelson’s ] called The Troublemaker and he has the same amps as he did back then. There is a picture on the back of the record and you can see the amps.”

As bass player for The Delines, it hasn’t been as hectic, but things are still afoot. “The Delines are sitting on a record. We are at a stopping point with it. We are letting it breathe for a minute to see how we feel about the mixes. Once that happens we’ll make a plan. And obviously we are going to have to get our ‘ace’ back healthy.” That ‘ace’ is the singer Amy Boone who was caught in a car accident back home while Richmond Fontaine were touring Europe in spring. Willy Vlautin wrote the songs for the Delines’ first album Colfax around Boone’s voice. The long, night-rich warmth in her voice is central to the music of the band. They aren’t going anywhere without her.

And Boone is a fan of Freddy Trujillo. “A good musician knows how to build up a song” she told me. “Ballads are especially tricky, but Freddy has the ability to play all types of music, he could play speed metal if he felt like it.” (In fact, in an interview last year Trujillo told No Depression, “I will still jam along to Iron Maiden or Bad Brains records to keep my chops up.”)

However, his skills lie way beyond the speed of his playing. “It’s the restraint and the choice of notes that makes his playing so smooth and tasteful” Boone continued. “He’s a great singer also, and can pick-up harmonies fast. I love singing with him and being on stage with him.” Indeed it’s a regular occurrence now that Trujillo is given a spot during a Delines’ gig to perform one of his own songs. “I guess more than anything during Delines’ shows, it is the fact that we all want to hear Freddy sing” Vlautin explained when I asked how come this seems to happen at every gig. “He’s got such a great voice. So we made him [sing] out of our own selfishness.”

All of this comes into play with Trujillo’s own song writing as well, and he is presently working on a batch of new songs as we speak.  “The song writing is going pretty steady” he told me. “I had one of those lucky tunes fall into my lap the other day. You can’t always rely on those, but when it happens it is great. When I get a handful of tunes I will probably go see my producer Luther Russell and dial things in. What we like to call ‘map the record out’.”

There’s more collaboration in the pipeline too. “There has been some talk of getting back in the studio with Fernando” he announced.  That’s Fernando Viciconte his long time sparring partner who brought out the album Leave The Radio On last year. “This time we will do it in Los Angeles.  It will be a reunion for Fernando and Luther Russell to work on a record from the ground up. Luther helped on Leave The Radio On with the mix. But the true experience of making records with Luther is quick and fearless with old school techniques. He almost mixes as he goes. He is a witch in the studio!”

And one last point. At this stage of the presidential race, what are Trujillo’s thoughts on the elections and building walls? “Wow! What a shit show … I do have to say that I think the only good thing that this election has going for it is that history is going to be made. The first woman president and a former president as First Man. Pretty crazy! … I really am not too worried that Trump will win. His campaign is built on fear of a type of person that is largely outnumbered. It seems like he isn’t taken very seriously by other legit politicians in the GOP. As far as the “wall” goes? There is already a wall in these people’s mind-sets. I would like the idea of blurring that wall in our minds. Especially in the southwest. That is what I was trying to get across with Amexica. Learn to deal with us! We were here before them. We have been dealing with them for years. 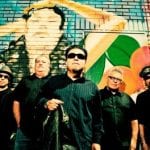 Los Lobos Isn’t “Just Another” Anything