Even though it’s the middle of the afternoon, the Romweber household west of Chapel Hill is dark. The blinds are drawn, all the lights off. In fact, the only source of artificial light anywhere in the house is the television set glowing in the den.

And what is Flat Duo Jets guitarist Dexter Romweber watching? The Weather Channel.

“I’m so sick of normal TV, The Weather Channel is about all I watch anymore,” says Romweber as he chain-smokes. “Although I watched the Discovery Channel last night. I try to watching something educational.” Romweber turns his attention back to the screen, which displays a map tracking Hurricane Georges. This is not an idle pastime for people who live in North Carolina, which has been hurricane-ravaged more than once in recent years. But Georges is headed toward Florida, sparing the Carolinas, and Romweber is disappointed.

“I always seem to be on the road when hurricanes hit here,” he says. “Which is a shame, because I’d like to be here. But…I tend to be gone a lot.”

For once, however, Romweber is selling himself short: He tends to be real, real gone a lot. And even if he misses the storms that hit his hometown, similar calamities follow Romweber around, because a Flat Duo Jets performance can be the closest thing to being pummeled by a hurricane this side of the real deal. The Feelies once titled an album Crazy Rhythms, but it’s the Flat Duo Jets who are still delivering them seven years after the Feelies broke up, night after night after night.

They just might be the most original cover band ever. What cartoon-metal band White Zombie does with horror movies and bonehead metal, the Jets do with sci-fi movies and rockabilly — they dig up the bones, make a rocket ship out of them and fly on up to Saturn.

Now the Flat Duo Jets have done something even more radical. They’ve slowed down, smoothed out and made an actual pop record with their new Outpost Records album Lucky Eye. Eighteen songs, all originals, some of them actually taken at less than breakneck tempo. A handful even have (ye gads) a 12-piece string section. And it’s all as great as it is confounding.

“I don’t think people believed we could make a record like this, because we have a history of going in and banging it out in three days,” says Jets drummer Chris “Crow” Smith, the other half of the duo. “I’m really proud of this record, I think it’s by far the best one we’ve ever made — because we had the time and the budget and the space and peace of mind to make a real ‘record,’ rather than just some live raucous thing. But I still love our older records, too, and hope we can do more of the raw stuff in the future. Dex and I want to hold onto that aspect of the band because it’s something special.”

In fact, anyone concerned that the Jets have mellowed out will find reassurance in the live album they put out earlier this year. Wild Blue Yonder, on Norton Records, is the next best thing to being there, smartly capturing the duo in all their crazed gonzo rockabilly vampire glory with one frenzied raveup after another.

Honestly, though, the Jets have made plenty of records like that already. For now, the focus is on Lucky Eye, and rightly so.

“I wanted this to be something different from what they’ve done,” says Scott Litt, who signed the Jets to Outpost and co-produced Lucky Eye with Chris Stamey. “I tried not to force any ideas on them, and we didn’t do anything they weren’t enthusiastic about. I just wanted to get the vibe of the group in a way that would appeal to a few more people, hopefully.”

During their 14-year history, Flat Duo Jets have broken up and reunited more times than even they can keep track of. Crow says their first breakup actually happened in the middle of their first big newspaper interview, although the writer who conducted the interview (Kirk Ross) remembers it differently. His version is that they’d broken up earlier, and reconciled in front of him and his tape recorder after an impromptu jam session in which Crow used empty ice cream containers for drums.

At least some of the Jets’ instability is due to Romweber’s shifting moods. Most everyone connected with the group treads lightly around the topic, but…well, let’s just say that the crazed abandon Romweber evokes so well onstage seems to come to him naturally. It’s worth noting, however, that Romweber seems to be in a far better state of mind now than he was a few years ago.

“It was just…a lot of wild living,” Romweber says of his past. “I did a lot of crazy things, and some I’m not too happy I did. But I feel much better these days, and I’m playing better because of it. I’ve been sober for about four years now and I feel better without [alcohol], although I have to have fun in different ways. I’m not fun anymore, I don’t get into any trouble.”

But through all his ups and downs, Romweber always seems to wind up back together with Crow because, quite frankly, they belong together. There’s no one else who can hang as well with Romweber, who notes of his drummer, “Crow has a helluva radar on him.”

Crow and Dexter first met 20 years ago at age 12, initially bonding over a mutual affinity for Kiss. Dexter was growing up as the youngest of seven children in the notorious Romweber clan. His best-known sibling is Sara, a founding member of Let’s Active who now plays drums in Snatches Of Pink. 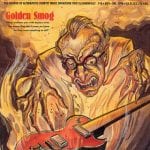