I had the opportunity to talk to Corb Lund on the phone the other day. Corb releases Losin’ Lately Gambler on New West Records on September 29th and has a freewheeling country sound and a witty approach. Here, Corb talks about the music that inspires him. Five Records is an occasional feature of artists talking about the music that inspires them.
Marty Robbins – Gunfighter Ballads and Trail Songs

“Both of my grandpas were ranchers and used to sing these songs all the time. Some of these cowboy songs are 150 years old — they used to be the way to pass on stories. I thought it was cool how the words always varied slightly to reflect the geography of the cowboy who was singing.”

“I’ve always admired Willie’s ability to transcend genres – He isn’t known as Willie Nelson, country music singer — its just ‘Willie’. He turned in Red Headed Stranger and the label said ‘This sounds like a demo’ and he said ‘This is the record’. then, a few years later, he turned in this record of jazz standards, and they said ‘We liked Red Headed Stranger! — keep doing that’ and he said ‘This is the record.’ Some of his records are hits and some flop, but he follows his gut and it works for him.”

“I listened to this while making Losin’ Lately Gambler. He’s one of my favorite contemporary writers — it’s cool to watch him get further and further out there. Instead of finding one thing and reigning it in, he seems to just let it go. I think Todd is fearless.”

“This record has a song called “Backstabber” — the girl who sings lead plays this sort of punk rock piano with a drummer. She has obviously been trained, but her playing is real raw. I would love to be able to play piano like that.”

“Hayes and I are pals — we have a similar thing going, with parallel paths, except for he is in Texas and I am in Canada. He has a soulful edge to everything he does, and can really relax and just let the song run. He is clearly a Texas songwriter, but seems to be a couple steps ahead of everybody else.” 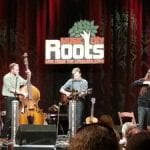