Some stories write themselves. Oftentimes a writer does some research, interviews the subject, and then weaves the resulting information into a narrative. But when the subject is Asheville, North Carolina fiddler Paul Crouch, it’s best to get out of the way and let the 82-year-old Crouch tell it himself.

“The first thing I remember about music was helping my father put the antenna up. We used to stretch the wire between two trees, with a glass insulator on each end. Then we tied our antenna wire to that, from the radio. And we listened to the Grand Ole Opryon Saturday nights; it faded in and out. It always seemed like that whenever you wanted to hear something, it faded out. We’d get a lot of static. And we’d cut the thing off, not knowing it took more juice to warm it back up that had we just left it on. This thing was about as big as a shoebox, with three or four ‘D’ batteries.

“I remember the Carter Family being on the Opry. That was back when J.P and Saraand all of them were together. They’d come onstage and sit in a horseshoe circle, and sing. It impressed me; I thought it was the prettiest thing I’d ever heard in my life. I listened every chance that I got.

“So I wanted to play, but I didn’t have anything to play on. One of my uncles gave me an old gourd-back mandolin, but I wanted to play fiddle. So I went and made a bridge out of a piece of lumber, and raised it up to four strings. I took a green stick and bent it and tied it into shape, and I got some horsehair — from my own horse — and glued it in. And when it dried, I cut it [to shape] and then tightened the stick up enough so I could play.

“In no time at all, I could play ‘Turkey in the Straw.’ My daddy was impressed. So a couple of weeks later, he went into Asheville and bought a fiddle for $12 at Finkelstein’s pawn shop. And he walked all the way home — about ten miles, over a mountain — with it.

“I just sat down and started foolin’ with it and learned to play. It just came naturally to me. Eventually I got to pickin’ with people, but for awhile I’d just play along with the radio. I’d have to listen to a song two or three weeks before I’d learn to play it. On the Grand Ole Oprythey did basically the same tunes every week, but with a different band. I got to where I was playing pretty good.

“Around 1940, Jack and Curly Sheltonwere playing over in Asheville on a radio show. Their fiddle player quit, so I went up and applied for the job. And they hired me. I had no car, so I had to walk from Herron Cove in Weaverville and then catch a bus — for a dime — into town. We did an early show, about six o’clock in the morning, so I was out the door before it got light. I don’t know who listened to a show that early, but they did! Because we got a lot of mail.

“The band decided to move to Bristol, Virginia, so they came out to our house to ask my daddy for permission to take me; I was about thirteen. They treated me like a brother, and watched after me. We stayed up in Bristol for about a year, but it was during the coal strike. So we didn’t make a lot of money. We did a radio show on WCYB; we would record at a place maybe a hundred miles away from where we lived; we’d go home and listen to ourselves on the radio. We did live radio shows when we could, but when they were out of town, we’d record them. We rode around in an old Oldsmobile; we had an upright bass, and that went between me and Curly Shelton in the back seat.

“So they were the only people I had played with. I played with them until I decided I wanted to come home; I was homesick. I hadn’t been back home long; I went squirrel hunting one morning, and when I came back, Mac Wisemanhad been at our house all day, waiting for me to come home. He wanted to take me back to Bristol with him. So I got in the car and went with him, and stayed with the band three or four months until my mother called me on the phone and said, ‘we have your draft papers here.’ They got me!

“When I got back from Korea, I didn’t go back to pickin’ for several years. I played a little bit with a gospel group called the Herron Valley Trio. When we were going to be at a church, you couldn’t find a place to park, we were so popular. But that band drifted apart.

“My wife kept telling me, ‘You ought to play your fiddle.’ I said, ‘Ain’t nobody wants to hear me play.’ But then sometime in 1952 my next door neighbor came and said, ‘They’re playing music down in front of Westgate.’ My fiddle strings were all rusted by that time, and I didn’t have hardly any hair on the bow. But I went down — Mark Pruett was playing — and I walked up to them and said, ‘Would you fellas mind if I played a tune with you?’ I started playing ‘Fire on the Mountain’ and they liked to have a duck fit. They said, ‘Who are you?’ I said, ‘I’m Paul Crouch.’ They said, ‘We heard you got killed in the Korean War!’ I said, ‘This is definitely me.’

“They were staying right there at the Hilton that night. They said, ‘Would you play with us tonight? We’ll give you $150.’ Here I am, painting houses for a dollar an hour. I said yes, but I told them, ‘I don’t know any of your tunes.’ They said, ‘You’ll do fine. Just get out there and do what you just did.’ The crowd went crazy; I could not believe that people would pay me to do that! They asked me if I’d be willing to play more shows with them, and I said ‘Sure.’ So we went all over the country. I kept my job with the City of Asheville Fire Department, and played on the side.”

Over the next several years, Paul Crouch did indeed play far and wide, including performances for President Carter, and shows in Raleigh for several North Carolina governors. “The only place I wouldn’t want to play again,” says Crouch, “is a place I played when I was a kid of twelve — a place called The Bloody Bucket in Columbia, South Carolina. Soldiers used to get into fights there like you wouldn’t believe. I got under a table and hid. That’s the last beer joint I ever played in. I have a standing rule: I don’t play with people who drink, and I don’t play beer joints.”

“The last band that I hooked up with was the McMinn Family Bandout of Tuxedo. We played Coon Dog Day in Saluda for many years. And I played it a couple years more after they quit.”

Paul Crouch’s impromptu performance of the song “Fire on the Mountain” was used for years as a promotional piece of the Nashville Network’s 1980s TV show of the same name. The producer heard him start the song and said, “That’s exactly what we’re looking for! Do you know any more of it?” Crouch replied, “I know four verses. Three of ‘em, I made up.” Crouch says that “All I got was the money they paid me for doing the show.”

“I was down in the basement recently,” he says, “and I found a box of cassette tapes, recordings that I did 35 years ago. I went through them and found that I could find enough tunes — they’re not perfect — to make one CD. I’ve been giving ‘em away; I guess I could’ve sold them! I never realized I was playing as well as I was playing. I was just having fun.”

Crouch has some advice for today’s younger players. “Don’t put too many notes in; stick to the melody. If people don’t understand what you’re playing, they’re not going to care for it. When you play a tune for a crowd of people, chances are — if it’s an old tune — they remember something that they did at the time the song was popular. They associate that with it. And Curly Foxtaught me about entertaining. He said, ‘If you go onstage and stand there and you don’t smile, you ain’t going nowhere.’” 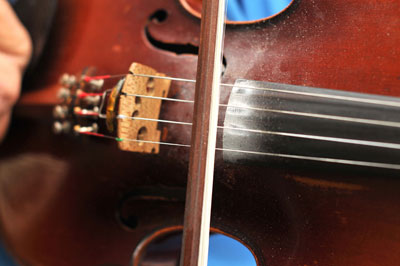 Many people have encouraged Crouch to come play at folk festivals in and around Asheville. Organizers of the 2010 Shindig on the Green convinced him to perform on the opening night of the long-running festival. “Music — with people that play like me — it’s a sickness,” he muses. “It’s a disease. I can lay it down for about three or four days, but I have to pick it back up. I just play because I love to play. When I’m on a stage, I’m electrified. There’s a lot of good musicians in this area. They’re a family, and I feel like I’m a part of that.”

“I’m 82 years old. I’ve got back problems, shoulder problems. I’m still doing everything, thank the good Lord. I don’t do it as well as I used to, but I still do it. But I’m happy. This man is happy!”

Bill Kopp is an Asheville-based music journalist whose daily features and reviews can be found at http://www.musoscribe.com and http://blog.musoscribe.com.
Follow “the_musoscribe” on Twitter and get notified
when new features, reviews and essays are published.