Originally at Funk or Die..

“A lot of those New Orleans drummers would come through, and I got a lot of stuff from those guys”- John “Jabo’ Starks (Drummer-James Brown)

Some might say James Brown invented funk..some (including Earl Palmer himself) would say Earl Palmer was the man who brought the funk first, melding the New Orleans second line into pop tunes for Dave Bartholomew and Fats Domino. Still others look to cat who replaced Earl in Bartholomew’s ensemble, Smokey Johnson, as the man who birthed funk. Fact is funk has always been with us, but Smokey might’ve found it first..(Earl King-Trick Bag ’62).

Until recently, I thought it was the Meters Ziggy Modeliste who defined NOLA funk (and therefore funk in general), but a site called Home Of The Groove clued me into the fact that Ziggy (and Idris Muhammed, another funky drummer) were mentored by none other than Smokey Johnson. It’s no surprise either, that many of Smokey’s laid baid NOLA funk sides were produced by Wardell Quezerque (another highly underrated innovator in the soul funk field.)

Smokey was mostly a session cat, but below you’ll find a few of his singles as a leader, including It Ain’t My Fault from ’64, a tune that might be the first funk tune on record and one that has become a Mardi Gras standard..Also see Funkie Moon for an example of where Ziggy Modeliste might have learned a few of his signature licks..

In the web link above there’s a story about how Smokey and a bunch of NOLA cats went up to Motown to audition..they cut a bunch of demos, but it was Smokey who impressed the most and stayed on for two months of production line work in the snakepit. Earl King said,” part of the reason why they got in the door was Motown’s fascination with Smokey Johnson, who could do more on a trap set by himself than any two of the label’s session drummers.” I dunno if that’s just legend, but if it isn’t it makes a lot of sense. From the beginning of recorded music in the US innovation has always spread from NOLA north…

Smokey suffered a stroke in ’93 so he no longer plays..he lost his home in Katrina and currently lives in Musicians’ Village, a Habitat for Humanity project in the Upper Ninth Ward of New Orleans.

Tuff City has reisuued Smokey’s solo work originally recorded for the NOLA label in the 60’s on a comp called It Ain’t My Fault. Definitely worth a look.

It Ain’t My Fault 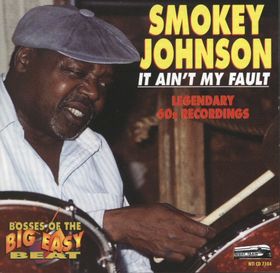