With a voice somewhere between Ferron, Eleanor McEvoy, Heather Nova and Cindy Bullens – this collection of tunes by dulcimer / flute musician Esther Golton is delightful the way a McGarrigles Sisters album always was.

“Stay Warm” starts with a cover of Christine Kane’s “Overjoyed” and segues into the stirring “Nectarina and Avocado” where Esther displays her dulcimer and flute to good effect. This song is so McGarrigles-feeling that I couldn’t help but wish Esther had worked with those two incredible women.

Esther is originally from Alaska and the tune “Fireweed Ladies,” is about he women in Alaska and the life-cycle of the fireweed. Clever? The song is Americana but with that Alaskan influence it’s like discovering a new folk music. But music from Alaska is nothing new — Jewel did that for us several years ago.

Alex Clarke provides the expressive acoustic slide guitar and Ms. Golton’s vocals on this track are infectious. I was always wondering what female vocalist/writer I could turn to since Joni Mitchell has basically “retired.” Esther seems to fit that bill brilliantly.

These are not just songs and words, they are well-thought out pieces that are creative and original — it’s like tasting something for the first time that awakens your taste buds like nothing before.

“Yula”(Ask) —  reminds me of the lyrical ingenuity of Buffy Sainte Marie and is sung in the dialect of Congo. Esther’s flute soars on this track and Borrina Mapaka’s song comes alive within Esther’s voice. This is the type of thing Joni Mitchell did, Buffy Sainte Marie and the incredible South African band Johnny Clegg with Juluka (“Scatterlings of Africa”) years ago. These are folk-world songs that do have a place among North American folk songs.

“Where Is the Field,” with its dual cellos is haunting and heavy. Esther’s excellent vocal and lyrics are chilling in a beautiful way. “….a tourniquet fashioned from feathery steel…”  “…it’s sowed in the seed of the winter wheat…” Wow. This is not your every day folk song – this is fascinating. This tune is especially powerful and I know I will be returning to it often. It’s like a prayer…it has that appeal, that power.

“Echo Point,” is Ms. Golton solo playing all the instruments and this also showcases some wonderfully stirring vocals. Esther doesn’t play her flute the way Ian Andersen of Jethro Tull would – she somehow uses it here like an extension of emotions. The flute almost plays the role of someone duetting with her – answering her vocals. The tale is about an Alaskan couple in the wilderness and I don’t know any artist today who is mining this type of ballad in this manner. Poignant, powerful, beautiful…there is little else to say about this one because one would have to actually listen to this to truly appreciate it.

Some music listeners may just enjoy staying within the confines of typical lyrics, stories and music. A comfort level so to speak. But, I enjoy discovering that artist that decides to not “push the envelope, or think outside the box” as much as actually exploring the possibilities that others don’t see or hear.

Esther is pushing against the wind. Not letting it blow her in the direction it wants but the direction she wishes to go. Because she is an independent artist she can do this. Major labels would fight her tooth and nail as they did to singer Sophie B. Hawkins several years ago when she released a new album with a song that had banjos on it. They objected. She stood firm.

Time and performance will bring Esther to a wider audience. Musicians like Esther Golton don’t stay on the sidelines for long. She only needs to maintain her quality and store up much patience.

Esther’s voice is more adolescent here and innocent on this solo tune “Chokecherry.” Again, the lyrics are intense in a expressive tale. “…white petaled honeysweet memories…” – “…goodbye to the good to make room for the great….”

I know there are many wonderful artists performing but for one to actually find a new way to express songs in this flawlessly is to be admired. If I were a singer I would be listening to everything Esther Golton writes so I can cover something on my albums. That’s the other argument that I have with many great singers and artists. Just because you can perform and sing, play an instrument — doesn’t mean you can write a compelling melody or lyric. That’s an art form of its own. Musicians such as Esther Golton — would be the archive to find something with richness and meaning. Singers should be lining up outside Esther’s door to cover her material. Judy Collins? Susan Boyle? Mary Fahl? Mary Black? Emmylou Harris? Absolutely.

The approach, the arrangements and performances are evocative, quite visual if you listen carefully to the stitched words that make these potent lyrics read like the finest “song” literature

“What Can I Say,” is actually the funkiest tune on this collection with its a jambalaya of fine instrumentation. On this track, Esther reminds me a little of a singer I admire who never made a big splash except for her one song that was a million seller for The Association way back in the late 60’s. That would be Ruthann Friedman – who wrote “Windy,” but had a fine Warner Bros album in “Constant Companion.” Now, I don’t expect Esther to remember Ruthann – but, this was the style Ruthann worked in and she was such a fine artist and writer.

I am trying not to write so much about individual tracks in my reviews anymore but an album like this deserves the musical surgery. There is so much going on, so much to bring to your attention that would spark interest. “Face,” is very upbeat and Rocco John Iacovone’s saxophone is a delight here. Esther starts this album with deep roots music, folk at times and little pop – but, this one even Joni Mitchell ( from her jazz era ) would find this exploring the alternative regions. This is a keeper. Quite captivating.

“Wintered In,” brings the cello back and Esther’s warm sincere tone is like a little Sambucca in the espresso coffee. Her flute is creamy, and the tune is like a private song. “…she sees me here coatless and shivering pale, she calls but then scolds me away….” If songs could be relegated to an art form Esther Golton has done this consistently on this collection. I like her songs, her music – but, if I only had her lyrics to read — I would be content. They could stand alone as poetry. 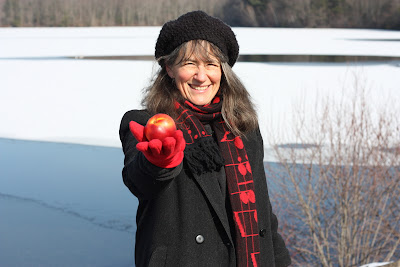 The title track “Stay Warm,” places Esther comfortably in the realms of Leonard Cohen as a disciplined wordsmith with melodies that are like milk and whiskey. Though she was born in Philadelphia and moved to Alaska for a spell – this is not Philly-inspired music. The late Robert Hazzard’s Americana was Philadelphia inspired but not Esther. Could her stay in Alaska have shaped and perfected her resplendent material? I have listened to many, many brilliant artists but this CD is the kind of album that if a writer or singer were drained of any creativity and was dried up – one listen and Esther Golton’s material would invigorate and motivate your own pen, your own creative determination to start again.

True, some people will listen and say “so what?” But, this is because they are looking for grooves, a danceable beat, something with fire and brimstone, drama and foot stomping hand-clapping energy. Well, look elsewhere.

This is for those who wish to “hear” something both in the lyrics and how the musicians are applying their talent. This is not about a groove as much as it’s about what old blues singers used to say: you have to feel the music, live it, let it get into your bones and in Esther’s case – your skin as well. The music and lyrics together, then applying the musicians themselves — it’s like putting a big puzzle together. But what a picture when it’s done.

This is where the heart and soul listens and not the ears.

This CD is a little glorious achievement. Most artists, talented as they are, don’t create a single album as good as “Stay Warm” in their entire careers. There isn’t one filler tune on the entire collection. Each holds its own wealth equally and none sound as if repeated listens would diminish their strength. Not for me anyway.

Esther Golton, Pat Fitzgerald and Robin Dale Ford produced this album and the package is a beautiful tri-fold with all the compelling lyrics available to sing along – and you should. Esther is my new Joni Mitchell. Judy Collins? Wake up Judy….there is a wealth of new, fresh material here for you to consider. This woman is an artist with a capital A and I love her for sharing these wonderful embers of music with us.

One other thing, according to Esther’s website she has been quite ill with something called Guillain-Barre Syndrome and Esther should recover – but, prayers and well-wishes most certainly wouldn’t hurt.

Esther belongs back on stage not in bed.

Disclaimer: Support Independent Artists — The opinion expressed in this review / commentary are those of the author and do not necessarily reflect the official position of No Depression.