Last month eMusic made a deal with another of the major labels — Universal. In doing so, they lost several independent labels, including Matador and Merge.

They also changed their pricing structure. It’s in dollars and sense now instead of credits. The prices also slightly increased — 49 cents for most tracks. Plus, eMusic no longer allows you to download for free tracks you’ve already paid for. (So be sure to back up your digital music collection!)

That’s all bad news. But the good news is a lot of the cool labels — Norton, Crypt, In the Red, Voodoo Rhythm, Bloodshot, etc are still there. And there’s still lots of good deals on albums, especially on the older stuff. And it’s till cheaper than either iTunes or Amazon.

Here’s what I’ve downloaded from eMusic in the last month:

* The Wild Man by Hasil Adkins. This was the Haze’s sophomore Hunch album in the late ’80s. Back in 1986, Billy Miller and Miriam Linna decided to launch a record company to unleash this West Virginia backwoods one-man-band’s early recordings — which go back to the 1950s. That compilation, Out to Hunch was the birth of Norton Record. For The Wild Man, they let him loose in a studio for a fresh bunch of recordings.

And happily, the result was pure Punchy Wunchy Wickey Wackey Woo. Most of the tracks are just Adkins singing, playing guitar and playing the bass drum with his foot — though on a few cuts he’s aided, minimally, by various members of the A-Bones. Nobody gets their head cut off here, but it’s still a lot of fun.

In addition to his own crazed tunes — “Chicken Flop,” “Big Red Satellite” and “Wild, Wild Friday Night” are classic — Adkins also performs several tunes by the likes of The Carter Family, Carl Perkins, Jimmie Rodgers and Merle Haggard (a slow and heartfelt “Turning Off a Memory”). But my favorite cover here is a hunchin’ take on Jumpin’ Gene Simmons’ Halloween classic “Haunted House.” 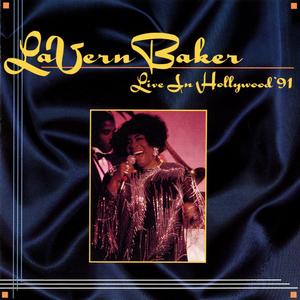 * Live In Hollywood ’91 by Lavern Baker. The first time I heard the song “Bumble Bee,” performed by the under-rated British Invasion group, The Searchers, I thought it was a real bitchen song.

The first time I heard it done by LaVerne Baker, I nearly covered my head for fear of getting stung.

Baker was one of the most powerful R&B performers of the 1950s and early ’60s. She’s best known for her hit “Jim Dandy” and the follow-up “Jim Dandy Got Married” (I forgive her for accidentally spawning Black Oak, Arkansas), but for my money Baker’s best was the song about that bumble bee (an evil bumble bee!)

Baker was on the comeback trail by the time she recorded this live album in 1991, six years before her death. Past her prime for sure, and her band lacked that first-generation R&B urgency. And yes, there’s too many easy-listening standards like “That’s My Desire” and “What a Difference a Day Makes Here” (though LaVern injects a lot of soul into these chestnuts). But still, it’s a good listen. “Tomorrow Night,” which she recorded in the ’50s, (I’m most familiar with Elvis’ version) is full of irresistible emotion, as is is her 1959 hit “I Cried a Tear.”

But my favorite one here has to be the grand finale, the Lieber & Stoller novelty classic, “Saved,”
the Salvation Army spoof, which was a title cut of a Baker album in 1961. “I used to cuss, i used to fuss/I used to cuss and fuss and boogie all night long!” she sings. Elvis did this song on his ’68 “comeback special,” The Band covered it on Moondog Matinee and , yes, I used to do it in my cheesy nightclub act in the ’70s and ’80s. But nobody did it like LaVern. * Outta Here by The Gories. This 1992 album was the last album for this Detroit trio, whose stature and reputation continued to grow long after the group broke up. (They started doing reunion shows a couple of years ago. I saw them in New York last summer — that’s where I snapped the picture to the left.)

With Mick Collins (who later formed The Dirtbombs) and Dan Kroha on guitars and vocals and Peggy O’Neil bashing the drums, The Gories billed themselves as “punk blues. Along with their originals, they covered blues and R&B classics in their minimalist, primitive style.

One of my favorites here is “Great Big Idol With the Golden Head,” which Leiber & Stoller wrote for The Coasters. They also do a tune called “Crawdad,” which basically is a rewrite of Bo Diddley’s “Bo Diddley.”

But best of all on this record is “There But For the Grace of God Go I,” which came from a late ’70s New York disco group called Machine. The song is a story of a couple of immigrants who try hard to protect their baby daughter. But by the time she’s 16 she’s running wild and ends up running away. The Gories cut it down to its basics and it sounds even more urgent the original.

You gotta give The Gories credit: They gave it their all to the very end. Though they were ready to break up by the time this was recorded, this definitely does not have the feel of some contractual obligation product or document. 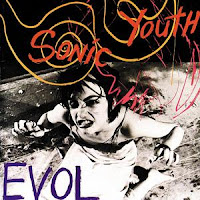 But still there was Sonic Youth exploring those strange darkened corridors of sound.

Highlights of Evol include “Shadow of a Doubt,” which might be Kim Gordon’s sexiest vocal ever; “In the Kingdom #19,” in which the lyrics, which tell of a car crash, are spoken by Lee Ranaldo, reminding me of The Velvet Underground’s “The Gift”; and the 7-minute excursion “Expressway to Yr Skull,” that sounds like folk-rock played by Neptunians. 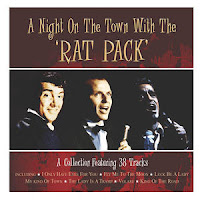 *Seven tracks from A Night on the Town With the Rat Pack by Frank, Dino & Sammy.

How can you not love these guys? This might not be rock ‘n’ roll, but the power, swagger and humor of these monsters shares a lot of common ground with the rock beast.

I’m not sure what the circumstances of this album are — not even when it was recorded. (As for the where — there’s references to Chicago as well as St. Louis, so you have to assume these performances were taken from more than one night on the town.)

There’s plenty of good old-fashioned fucking around here, (“What kind of fool am I,” sings Sammy as he begins his famous hit. “You’re a schmuck!” Sinatra answers.) But when they get ready to rare back and sing a song, their talent is unmatched. And the Count Basie band plays on at least several of these numbers.

I spent the last of my month’s allotment on songs from this album. I’ll pick up the remaining 31 tracks when my account refreshes.