Artist: Eden On The Line

Another tremendous year for live music. I was lucky enough to get to about 25 different gigs, as well as two festivals in Canada and the Great Escape here in Brighton. I held off finalising this list until I’d caught Kurt Vile last night, to round off the year.

As usual, it’s difficult to weigh big concerts by established greats with an audience in thousands against some young whippersnapper – like Braden Gates here – playing to tens of people in a bar.

Reviewed here. 38 years since I last saw him and both the voice and the songwriting skills are remarkably intact. The best bits were magical. Power and sweetness and (generally achieved) ambition, with some trademark off-the-wall moments.

Reviewed here. Leonard’s late, late, Indian summer is simply phenomenal: a wonderful band, beautiful singing, the two-way flow of love and respect between the singer and his audience. The irony is that, while he might not have been born with the gift of a golden voice, he has certainly acquired one, as well as creating one of the all-time great songbooks for it to roam through.

Reviewed here. Lovely to see him back with the Horse – and to get up close to do so. The staging was inventive and the sound superb. Living and audible proof that there need be nothing even faintly ridiculous in sexagenarians rocking out with electric guitars. Which has to be a good thing to know…

Reviewed here. Van at close quarters in his home town, and happy to be there. He sang beautifully, his band were excellent: a very special gig.

Why’s he number one, then? A 21 year old who’s just released his first album beating some of the very best writers and performers ever?

You can see my reaction at the time here. It was one of those experiences which get better and more memorable on reflection. The key difference is that I knew what Roy, Len, Neil and Van were capable of before I went to see them; I was word perfect on quite a few of the songs they played. They deserve to be on this list because they more than lived up to my expectations.

But with Braden, I had no expectations. I’d never heard of him. We’d escaped from the (dry) main festival site in Canmore to have a drink at an ad hoc bar without much thought as to whether the music we’d hear there would be any good. Which meant that it was a wonderful and truly memorable experience to be smacked round the ears by a naturally confident performer who plays fine fiddle and decent guitar, writes well and covers with taste and verve.

Who knows where his career will go? He’s got the talent to do very well and it’s going to be fascinating to watch what happens, having chanced upon this view at the ground floor.

For the second year running, Bruce Springsteen misses out despite playing one of his usual phenomenal sets: Wembley is just too big and they hadn’t sorted out the sound properly.

Just bubbling under my top five are a sizeable list including Lisa Hannigan, Del Barber, Billy Bragg, Michael Chapman, Dave Alvin, Hiss Golden Messenger, Tom Russell and Yo La Tengo. Beat that if you can, 2014…

Some from 2013 that left an impression 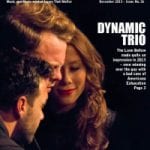 Dynamic Trio: The Lone Bellow made quite an impression in 2013