A lot of people are rooting for Dylan Michael Bentley, including his girlfriend, his mother and father, his many siblings and countless friends. He’s got a solid network of support rooted in his hometown of Sheldon, near Watseka in Iroquois County amid the vast expanse of central Illinois.

It’s a fertile wellspring of talent that has produced such musical storytellers as Chris Corkery,  Cody Diekhoff of Chicago Farmer and Ed Anderson of Backyard Tire Fire and Magic Box. Bentley follows in their footsteps with a purposeful nod to the trail they’ve blazed, like Hercules standing on the shoulders of giants.

Bentley’s an incredibly gifted songwriter. Wise beyond his 23 years, already sober and determined to find truth through his music. He’s a raw talent though, a diamond in the rough who is bound to improve with experience. One can’t help but wonder how good he’ll sound as he becomes more  polished.

Take his latest release, “Change In the Wind,” recorded between August and October at his parent’s home, where he and his dad often listen to Steve Earle and Bruce Springsteen’s “Nebraska.” One can hear those influences on the new record. “Change In the Wind” is a solid collection of thoughtfully honest, passionately delivered songs performed mainly on acoustic guitar with some harmonica accompaniment, a little piano and some less-than-perfect drum sounds. Bentley plays all the instruments on this latest self-released effort. 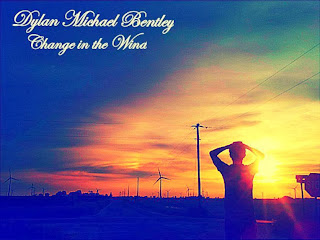 When you evaluate this album solely on its songwriting merits, it’s very good. Some parts are great. A well-defined thread runs through the melodies and the lyrics, and some lines resonate extremely well. There’s a wonderfully crafted theme of hopeful ambition, with arrangements that bring in electric guitar and sweet harmonies.

There’s also a great deal of variety on the record. The title track is a straightforward, driving romp that clocks in at two and a half minutes and races along with the intensity of a locomotive at full speed. The next track, “Knock, Knock,” has a catchy groove and lyrics that are about Bentley’s decision a while back to quit drinking alcohol.
“I made it a point to be very public about my sobriety,” he said during an interview following a recent set at The Full Bull Smokehouse Saloon in Watseka. “That way if I fall then I’m upsetting so many people in my life. If I’m not talking about it, people will know there’s something wrong. I’ve always hated disappointing people.”
The next track, “Wanderin’ Blues” is an upbeat number with a knockout guitar hook and lyrics one would expect to hear from a 23-year-old living in small-town America. “I’ve been stuck in this town and I don’t want to stick around oh Lord I’ve gotta get out,” he sings. The next song, “Run,” follows in a similar vein.
“Ramblin’ Gamblin’ Trav’lin'” is altogether different, though, a soulful vocal delivered over a percussive guitar track. “Blame it on the Weather” is a beautiful piece that introduces piano, and “Candle” is a lovely tune that contains the great line, “How many souls and hearts are in my hands? I put my fingerprints on ’em so they remember who I am.”
Bentley’s an accomplished live performer who plays at least two gigs every week, in Watseka and at The High Note in Pekin, a two-hour drive away. When he performs live sometimes his timing may be a tad off, but his voice is clear and strong and he can create ethereal moods with his sometimes-percussive guitar playing. There’s something very harmonic about his music.
But “Change In the Wind” is just a notch below a professional release. There’s no bass on the record, and the drum sounds are a bit out of time in spots and overproduced in others. You can’t buy Bentley’s music online, though at this moment you can hear “Knock, Knock” on his YouTube channel. (He says he’s not sure how long he’ll leave that up for public consumption.) You can buy his new CD for $10 at a release show Nov. 22 at the Full Bull in Watseka, and he’ll sell copies at all his shows.
The best way to learn more about Bentley is to friend him on Facebook and like his music page. “Facebook is half my job,” Bentley said during a recent interview with the IBWIP indie music podcast.
0
Shares