Dustin Bentall’s been around the Canadian music scene for a while now. His two earlier studio albums and an incessant tour scheduled have landed Bentall and his band a solid reputation in the Americana music scene. In the last the band–in one form or another–has opened for John Prine, Pegi Young and played just about every festival and town imaginable. This band has been working hard.

Somewhere in the midst of that insane schedule Bentall found time to write a bunch of new material and release a new EP titled Orion–“like the man in the sky up there with the belt and the sword” as Bentall describes it–as the lead up to a new full length album expected in 2013. A new CD means a new CD Release party, and Bentall brought the show to his hometown of Vancouver to play the Tiki themed Waldorf Hotel for a CD release show.
The night started with an opening set by Bentall’s friend and former roommate Ryan Guldemond, lead singer of Canada indie-pop sensation Mother Mother who got “swept away with the nostalgia of it all” while reminiscing about living with Bentall. Guldemond drew a good crowd of his own and the room filled in nicely by the time Bentall and his band The Smøkes took the stage. This was nice to see on the kind of warm October night in Vancouver that we don’t get that often.
The band reached back into the past to open the set with a couple of tunes from Bentall’s debut album before launching into Souvenirs and You are an Island  from the recently released Orion EP. The new material fits nicely with the old here: Bentall has stayed true to his Americana roots with enough twangy guitar and fiddle work to engage any fan of  the genre.
Taking a quick break to chat with the audience Bentall introduced one of the EPs other standout tracks as a true tale of adventures with his slightly older brother. If you haven’t heard Emmy-Lou you’ll have a good laugh at the story the song tells, and it’s as good a demonstration of the singer’s ability to wring a great song from the everyday as anything. The song gave fiddle player Kendel Carson a chance to play a longer solo too, and that’s always a good thing. Bentall turned the stage over to Carson for the next number, a snappy rendition of Chicago Man from her next solo release.

By this time the crowd was pretty much entirely on its feet and it was becoming apparent that we were watching something quite a bit beyond the ordinary: this wasn’t just any show, this was a band at its peak, firing on all cylinders and giving the audience everything it had.
About that new band: it looks pretty much like the old band, with Kendel Carson still on fiddle and bassist Dell Cowsill on bass guitar but Bentall’s welcomed new drummer Rich Knox to the fold. Feeling a name change was in order when “…we found Rich…we came up with about 500 that had already been taken and then we out a line in the middle of the O.”  Good call Dustin, and a fine choice in a new drummer too.
Bentall’s guitar broke a high E string on the next number. “This gutar’s just not bein’ my friend tonight” Bentall quipped. When an audience member suggested letting him tune it, Kendel Carson was quick to respond with “It’s better than him tuning my fiddle, I can swear to that.” While his guitar was being restrung Bentall played a couple of songs on a borrowed guitar, including an instrumental number that was as amazing a demonstration of guitar playing as I’ve seen this year. When his old guitar made its way back to the stage Bentall asked one of the most rhetorical questions you can ask: “Y’all like Neil Young, right?” A searing rendition of Young’s Powderfinger followed (you can see the video here) and nobody every went wrong with a good Neil Young cover in this room.

The set wound down with a mix of new material and old. Shine, Three Thousand Miles and Six Shooter were particular standouts of the back half of the set, with Bentall and the gang obviously having a tremendous about of fun on stage.

By the time the band left the stage they’d played almost a full two hours with not even a break. The energy in the audience was palpable, with no one wanting them to leave the stage. I spoke to a women I’d met earlier in the evening who asked me “If Dustin Bentall was any goody”–she was a Mother Mother fan and had come to see the opening set. At the end of Dustin’s show there was no doubt in her mind, and she’ll probably be back for the next one.
Watching a band on the rise is always fun and catching them at the right moment in time is tricky. For Dustin and his Smokes, the current Orion EP release tour seems to be that time. The level of talent on the stage at the Waldorf was so much bigger than the size of the audience it’s hard to imagine this band isn’t going to just explode when next year’s full length follow up to the Orion EP is released. Catch the band now while it’s still easy, before the sold out shows at larger venues that are sure to follow that release. Make sure you bring a friend too: if they’re not a fan when they walk in, the band’s going to do their best to turn them into one by the time they leave–and it’s probably going to work.
Dustin Bentall and the Smøkes are back in the studio recording new material for a full length album to be released next year. The Orion EP can be ordered directly from the Aporia Records store. 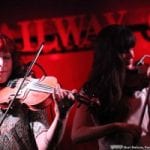 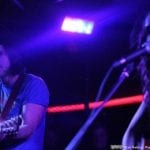 Dustin Bentall & the Smokes with Lindi Ortega at the Biltmore Cabaret