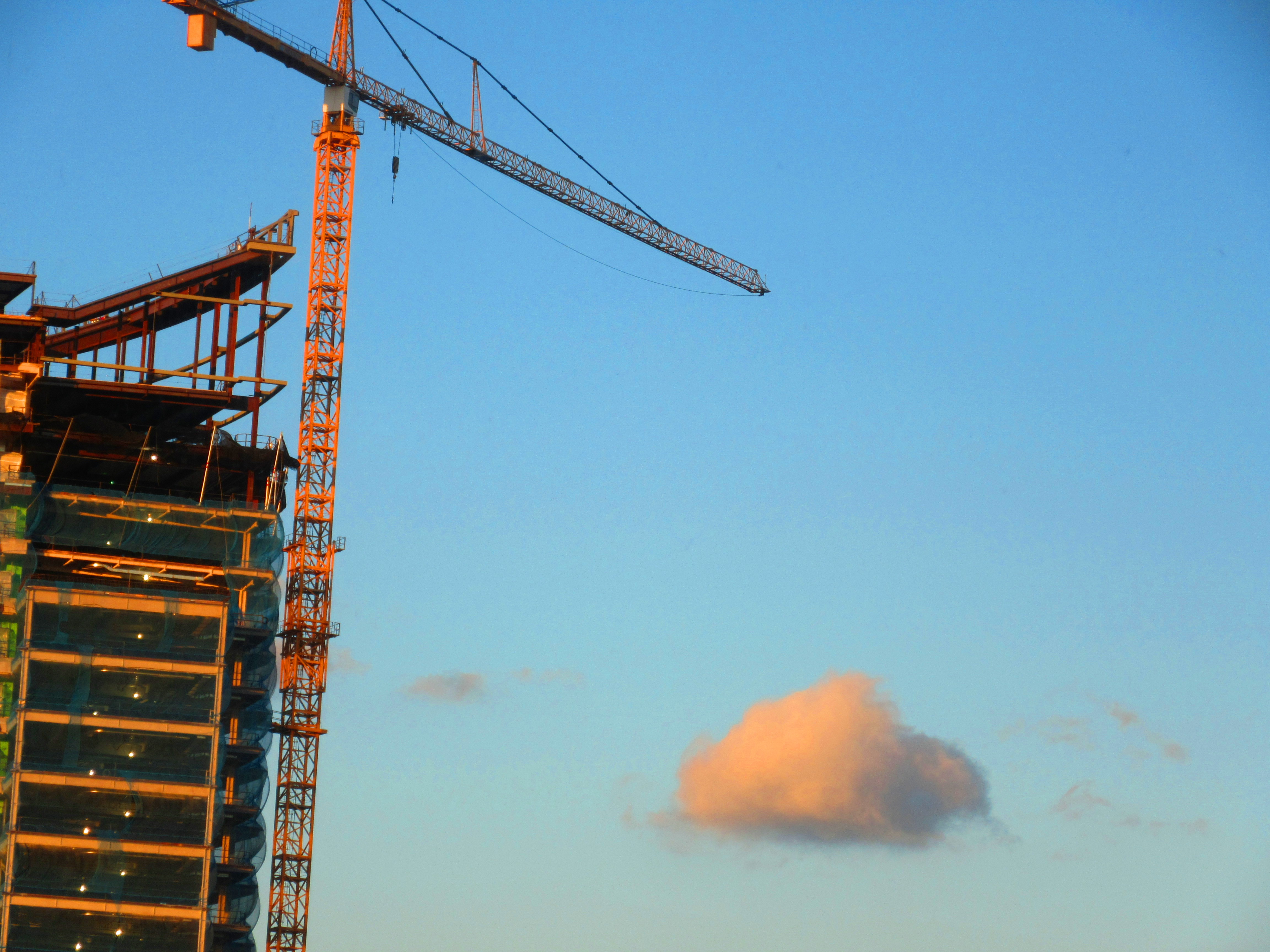 Dreamland’s cloud in Blu, 23-plus stories up.

This brief photo essay interprets the experience of hearing Dreamland, an imaginative and courageous ensemble which has worked hard in recent years to make much of the challenging Thelonious Monk repertoire alive for new listeners, and gratified old Monk fans. 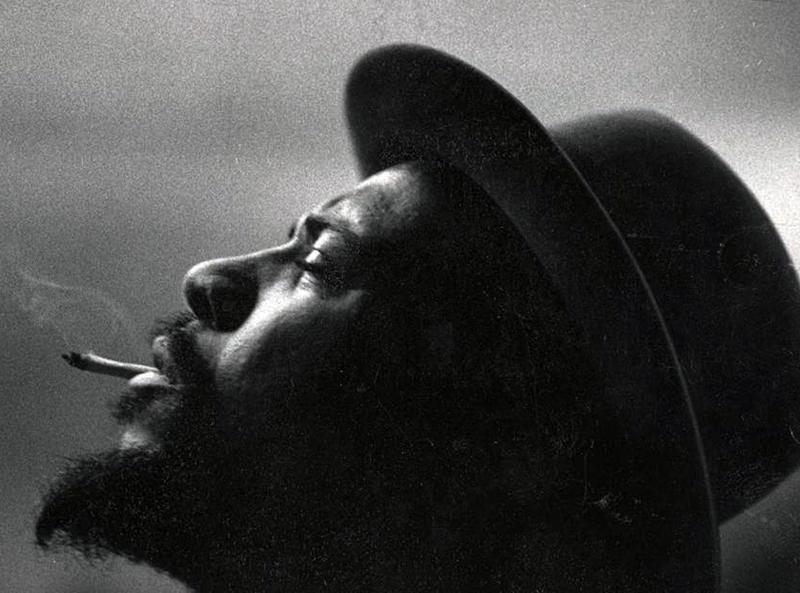 The band Dreamland is named for an obscure Monk tune rediscovered by trumpeter/bandleader Jamie Breiwick. Monk often seemed to live in his own private dreamland. Photo by Eugene W. Smith, courtesy UPI.

The band, conceived and led by trumpeter Jamie Breiwick, performed Friday night at Blu, the nightclub located on the 23rd floor of the Pfister Hotel,  with stunning views of the downtown Milwaukee lakefront.
I began taking a few photographs with no agenda. Gradually it seemed that the band’s ambition in reaching high to master and re-imagine Monk’s technically vexing yet uncannily charming and intriguing music — in such an atmospheric noir setting — was worth a visual treatment, or a dream sequence.

Such stimulating variables may be partly why they’re one of my favorite music groups. So, though a longtime arts and jazz writer, and because this concerns the architecture of Monk and of Milwaukee, I am in letting the dreamland images speak for themselves (for the most part), mindful of a famous Monk quote: “Writing about music is like dancing about architecture.” 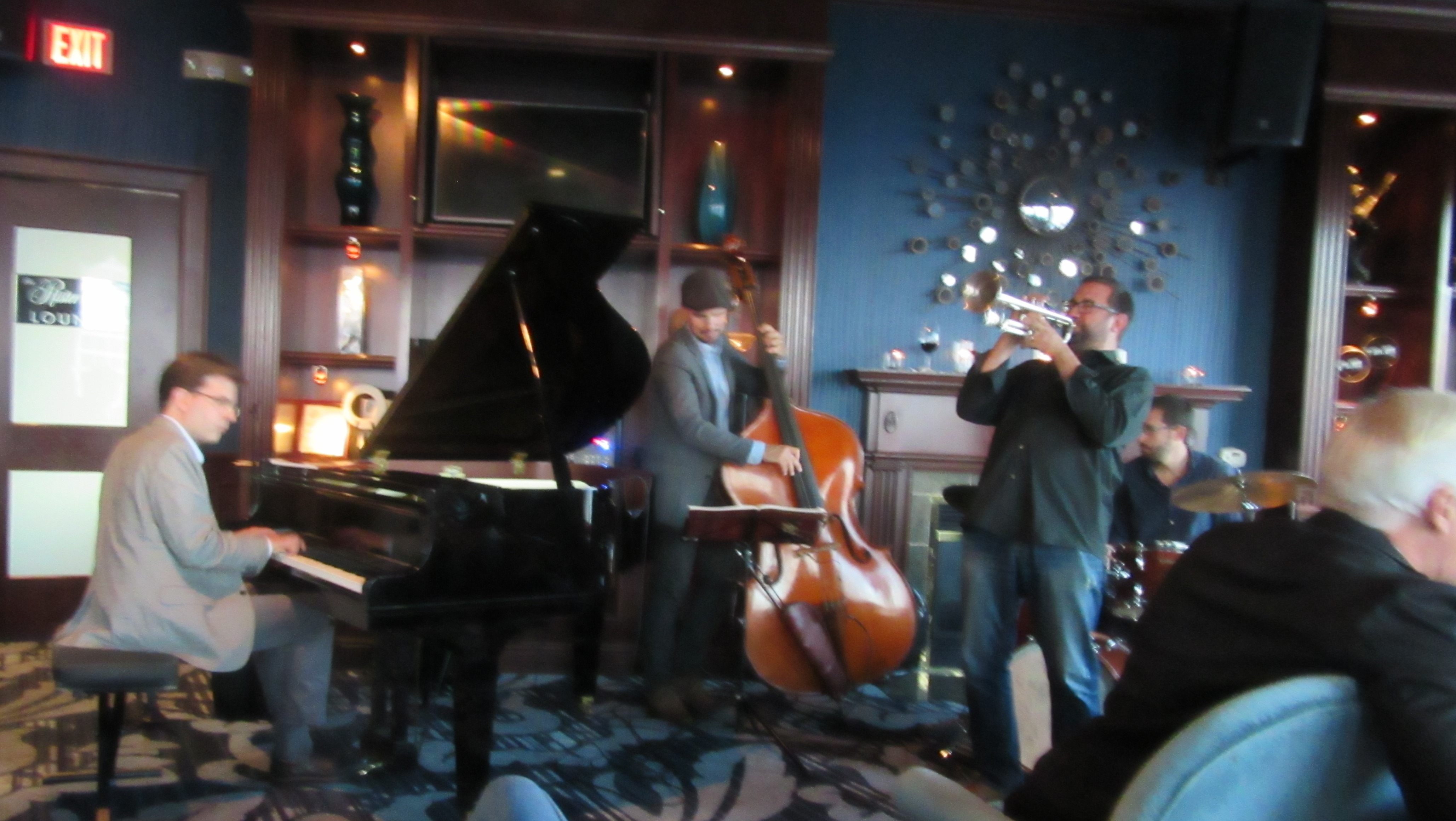 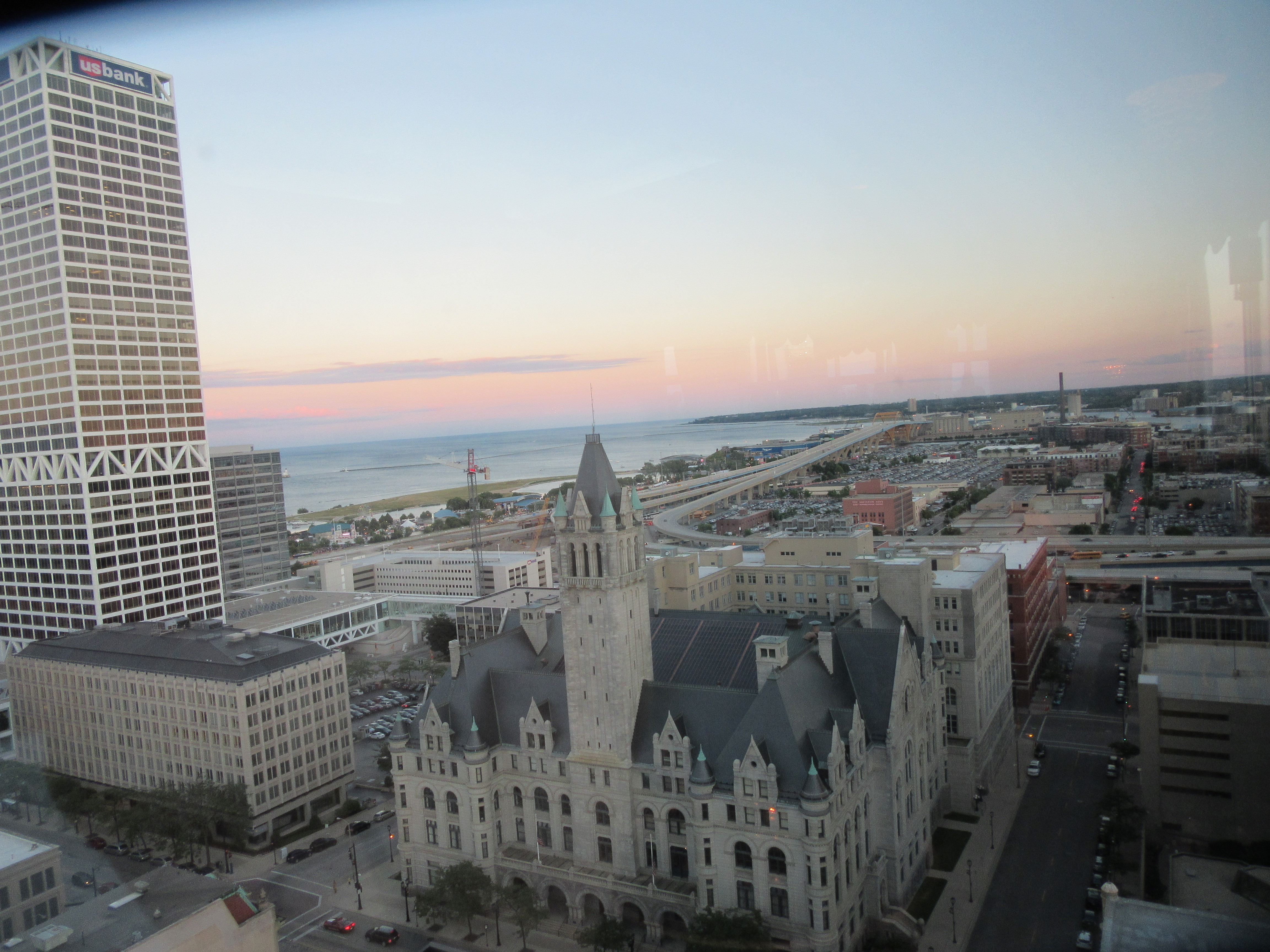 From Blu’s windows, you see the counterpoint of classic and modern Milwaukee architecture, looking south toward the Hoan Bridge. 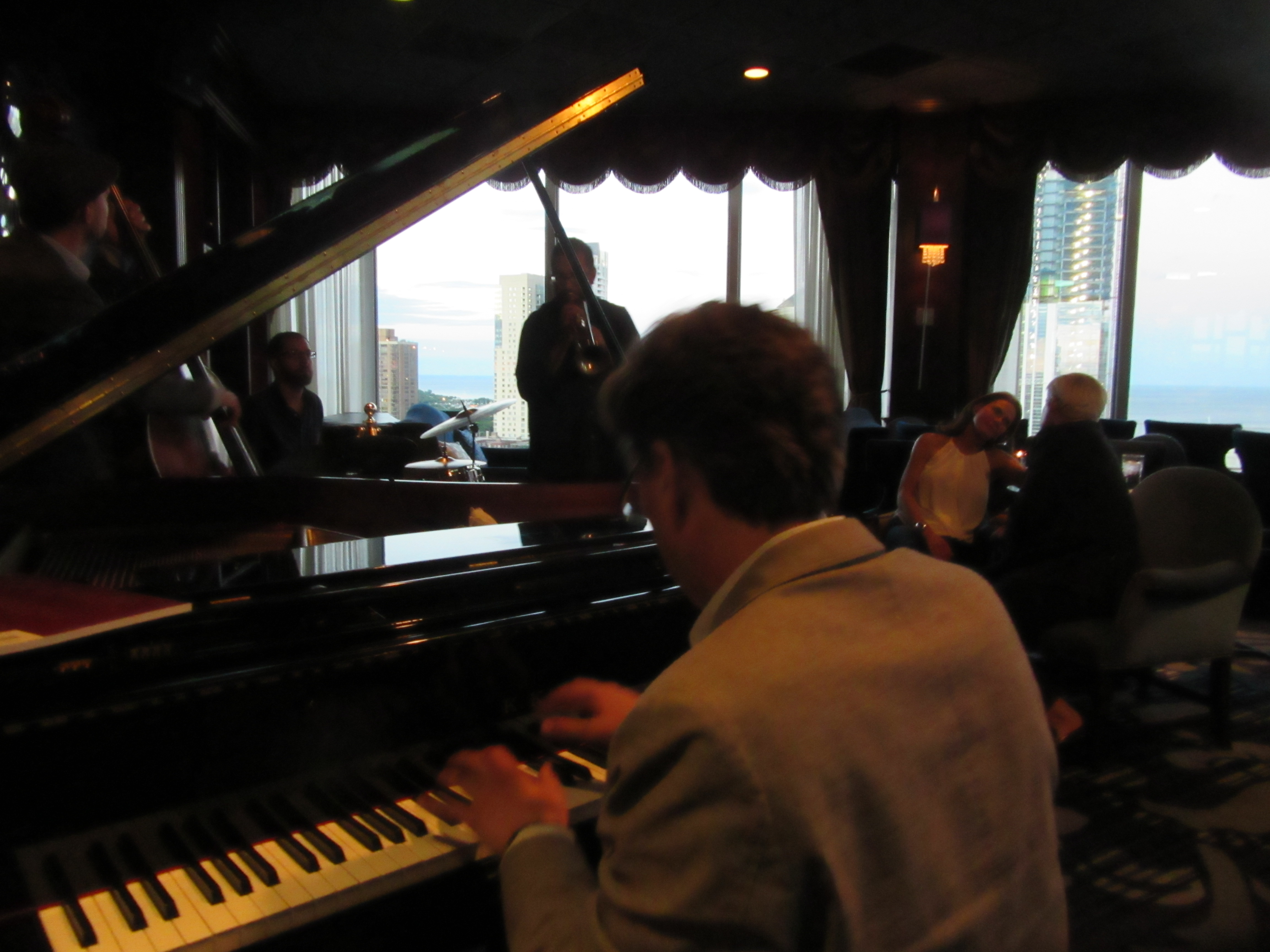 At least one couple seems transported by Dreamland. 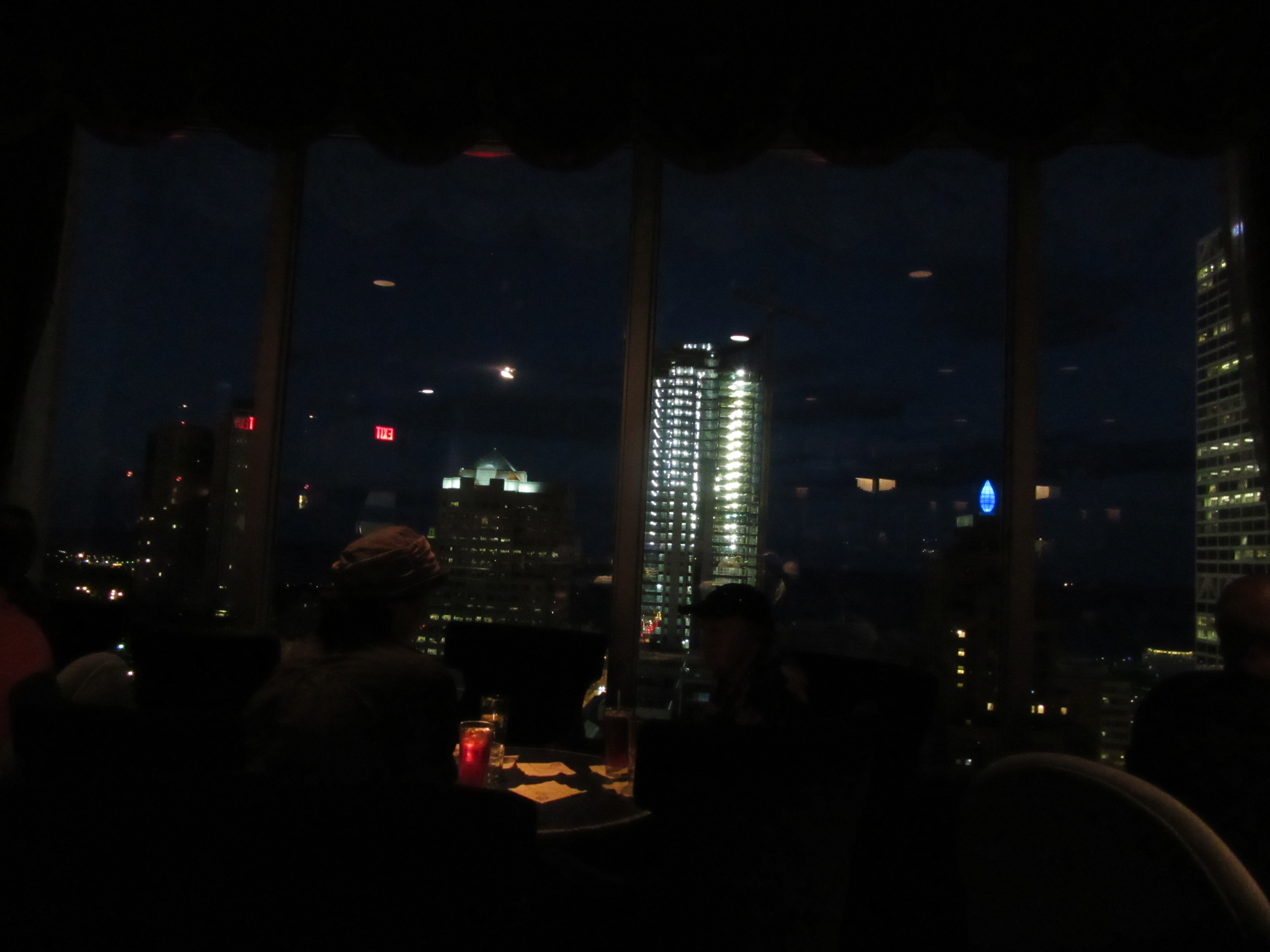 The still-rising Northwestern Mutual Life Insurance tower is illuminated by many stories of its construction lights on the right tower portion. At, right, the blue flame atop the iconic Milwaukee Gaslight Building forecasts the weather. 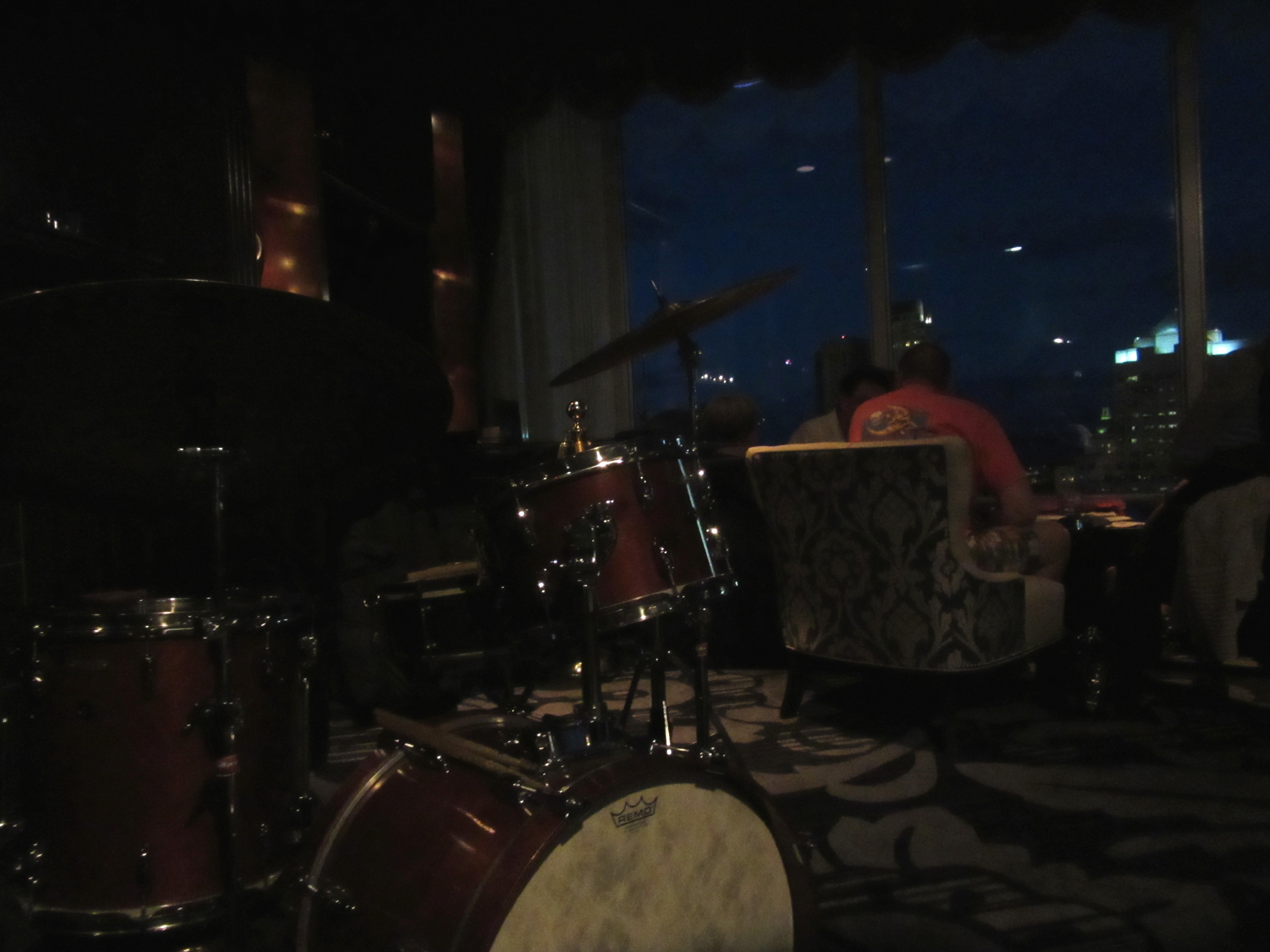 Blu is the rhythm of drums deep in the night. 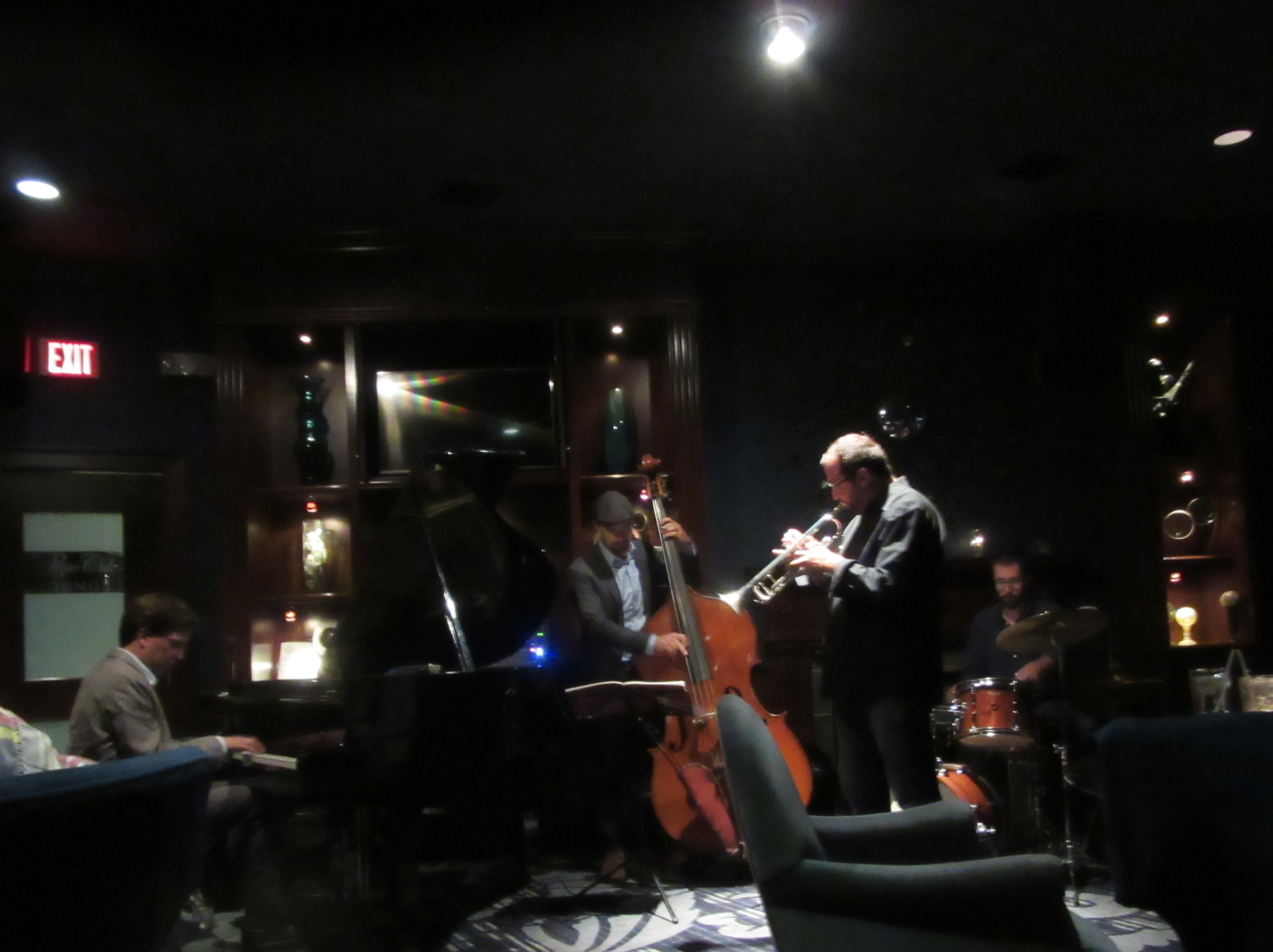 Dreamland begins heating up as darkness as falls on Milwaukee. 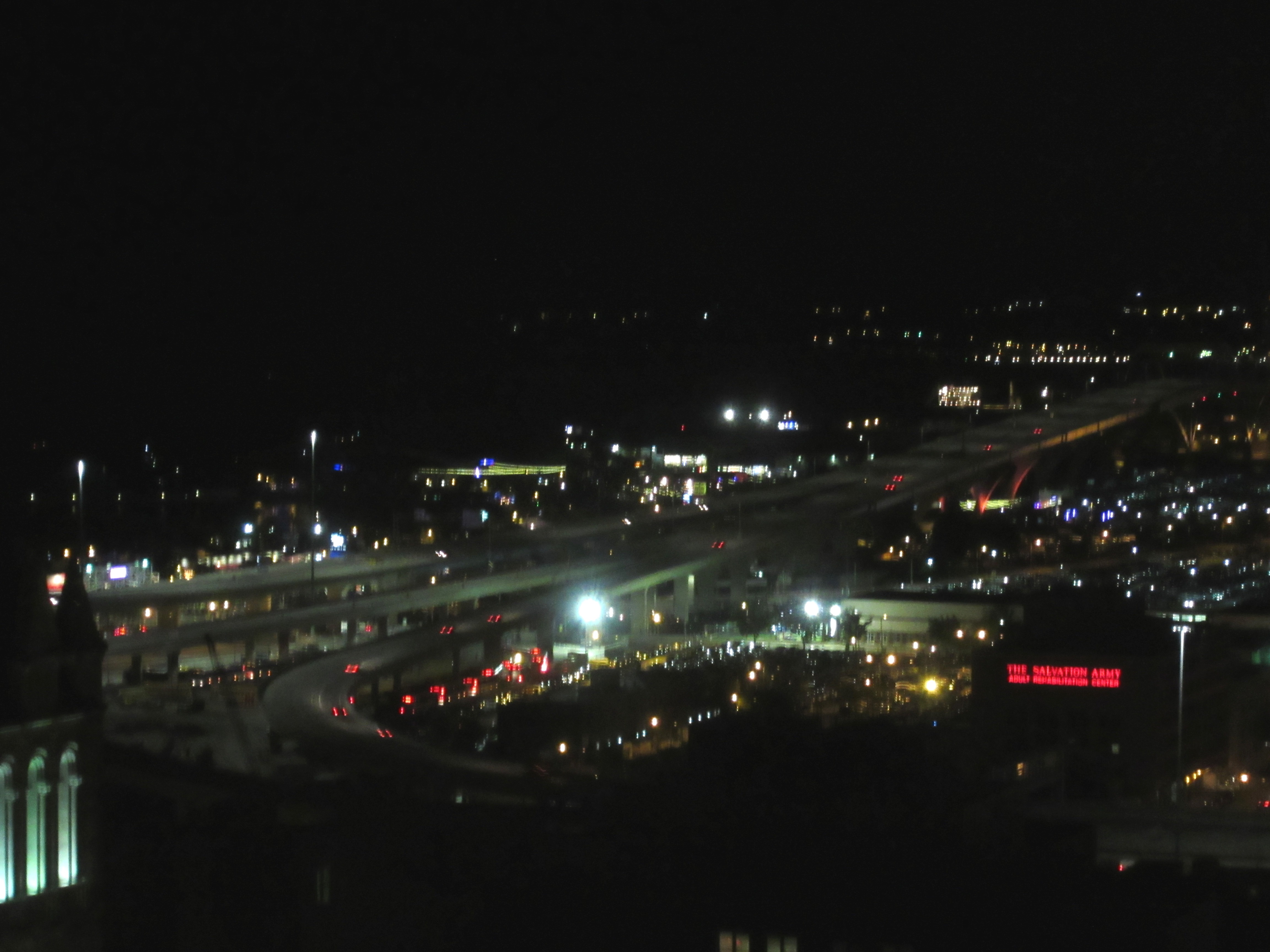 From Blu we see the end of the I-94 expressway in the foreground, curving into the southbound Hoan Bridge harbor overpass. Many years ago, when the I-94 ramp remained an unfinished precipice high over the ground level, it was used as “the expressway to nowhere” in the precariously climactic closing car chase scene in the film “The Blues Brothers.” 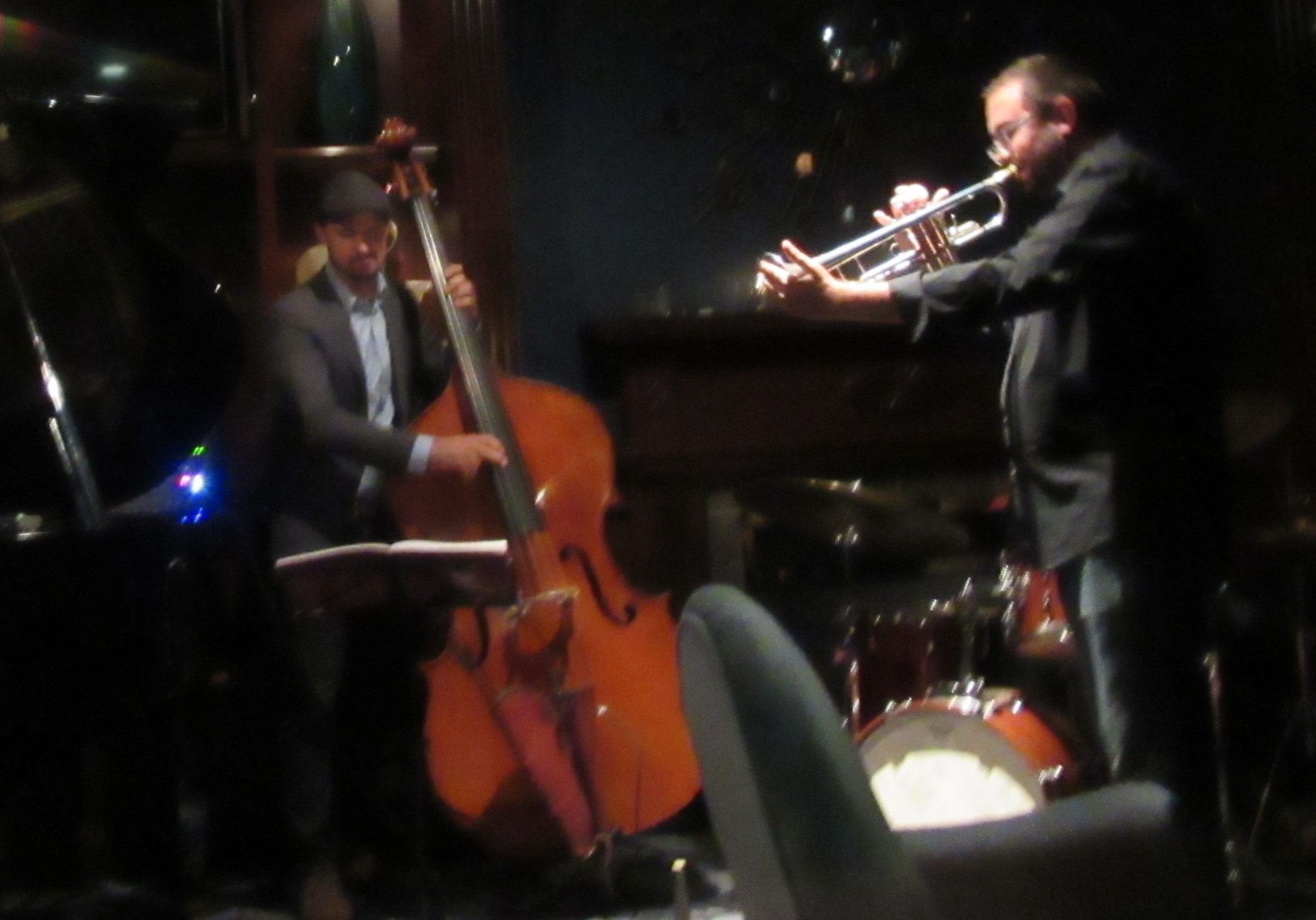 Trumpeter Breiwick uses his hand over his bell to bend a mournful note on a Monk ballad. 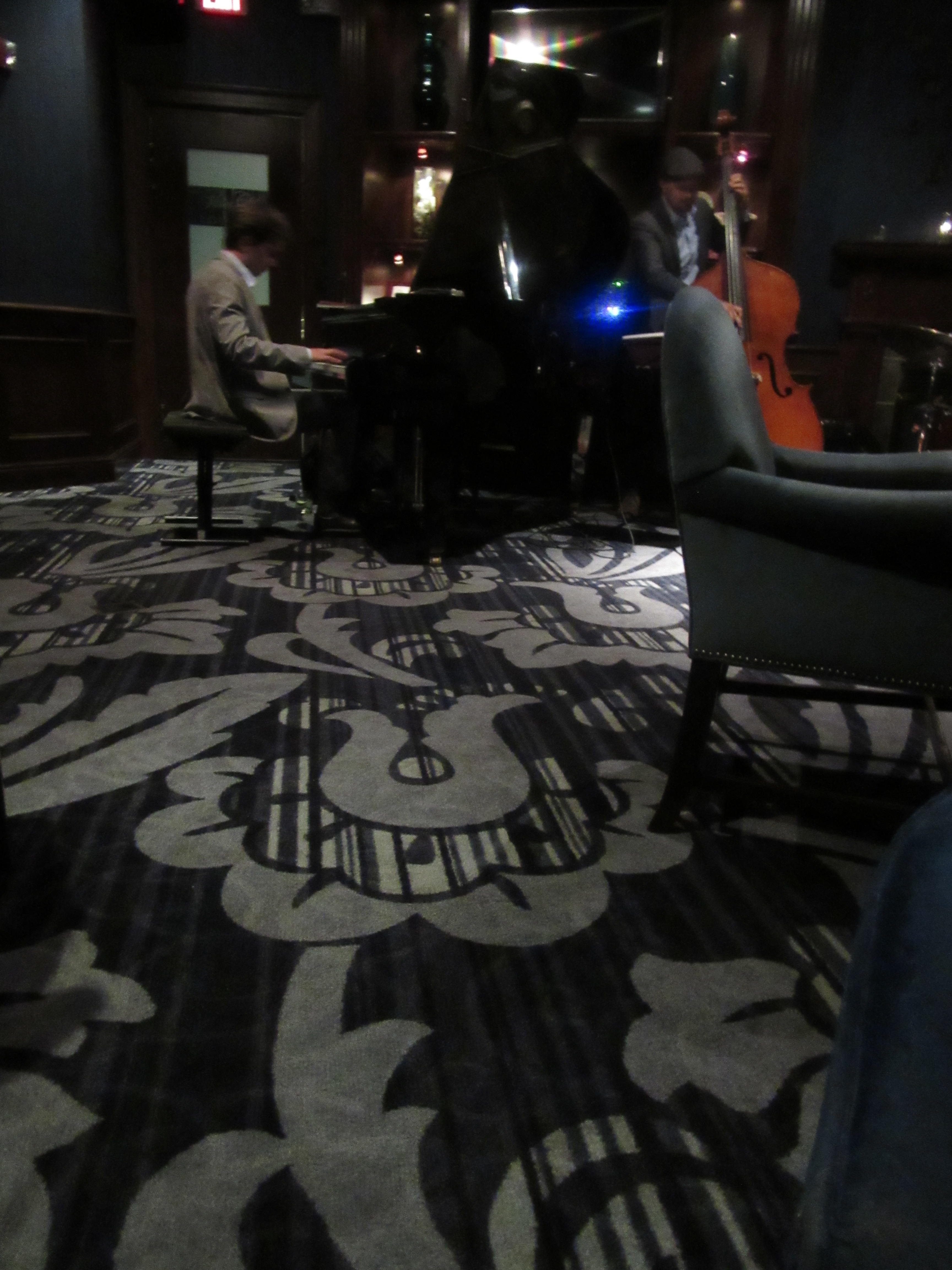 Even the carpeting in Blu has a dancing, dreamlike quality. 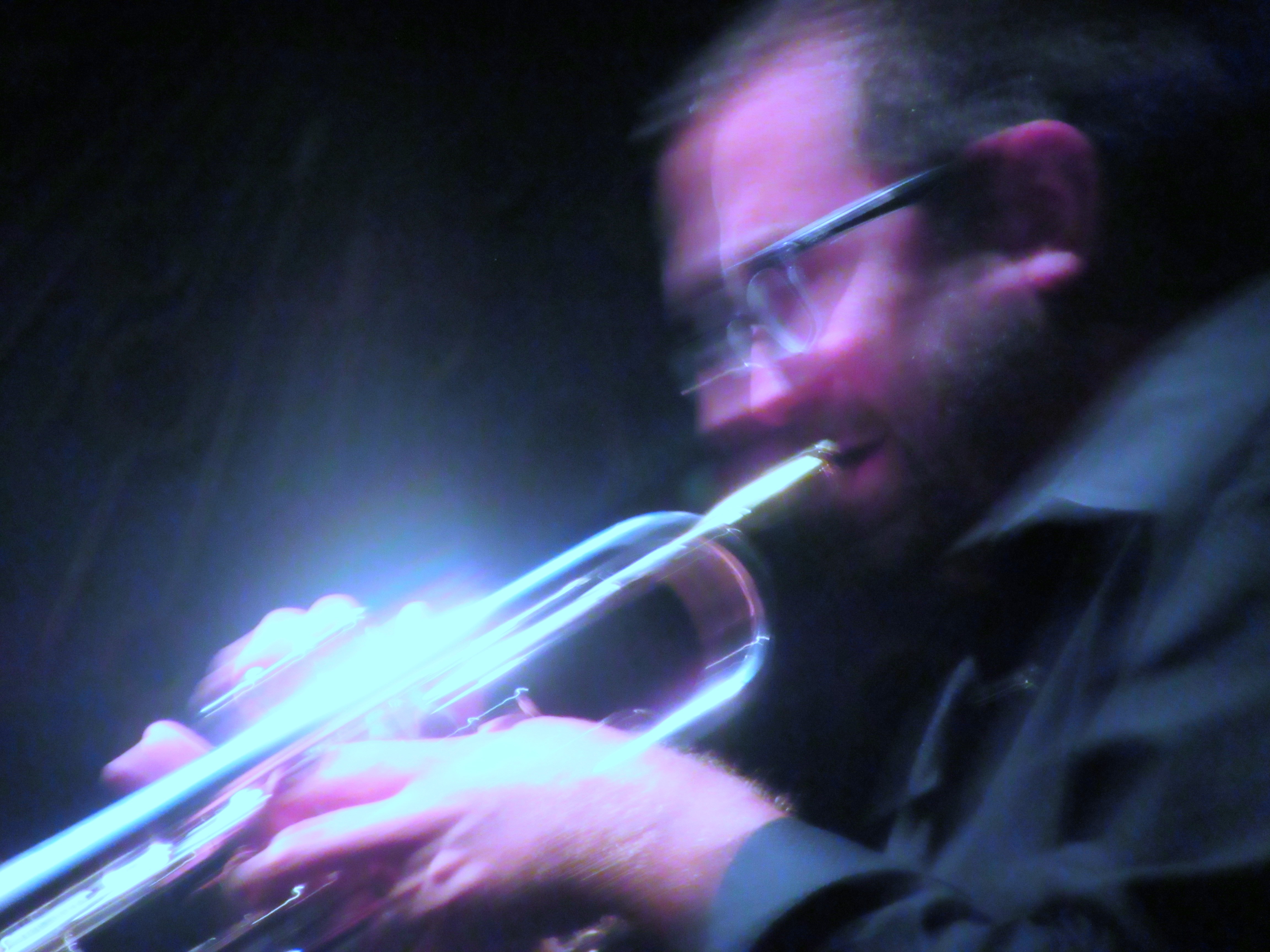 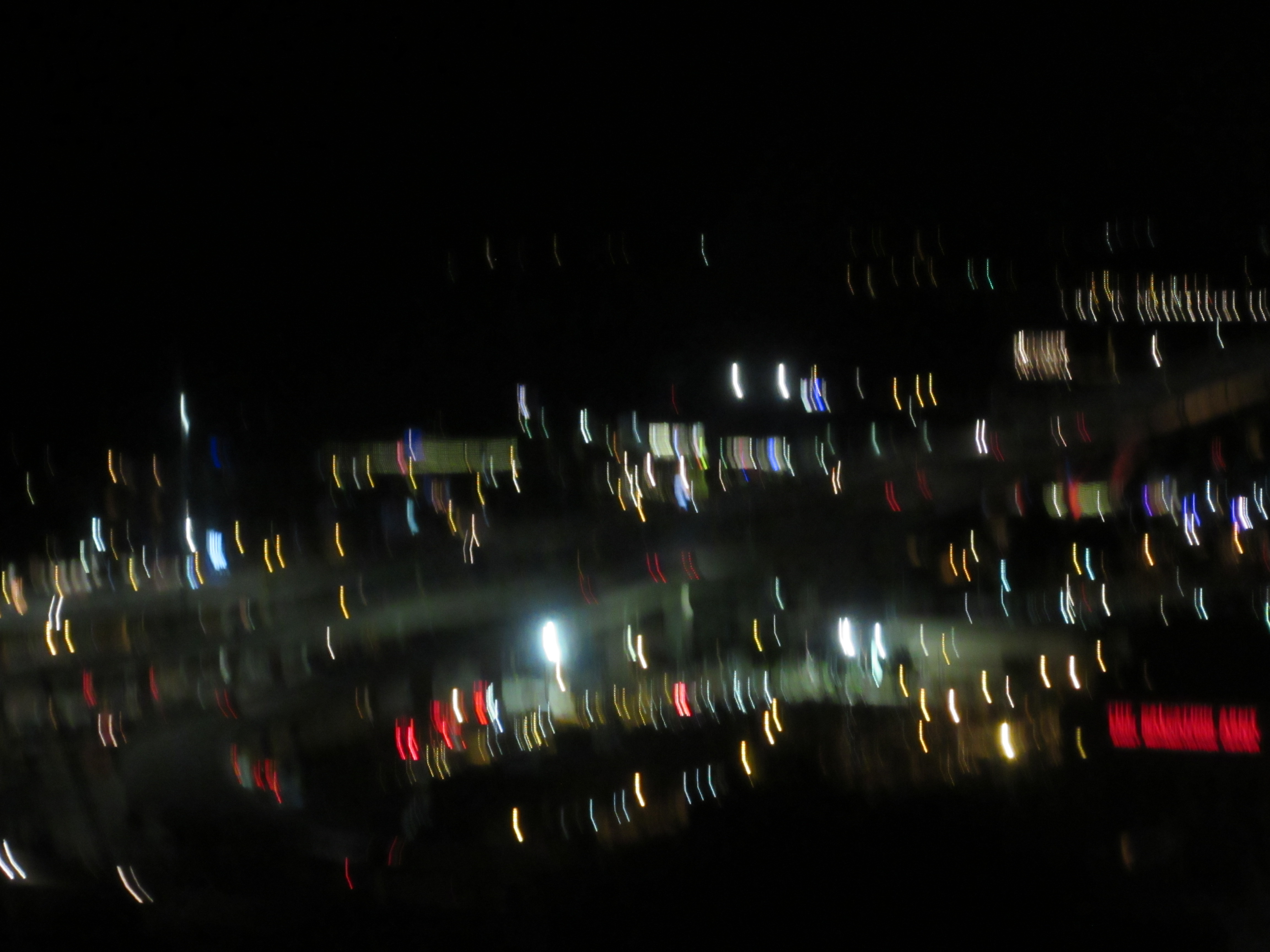 Just maybe, this is how Thelonious Monk – a genius of dancing, songful abstraction – might have viewed Milwaukee’s south shoreline along the Hoan Bridge.

P.S. Well, I’m fudging a bit on my promise to let the photos do all the heavy lifting, such as it is. But I’ll add a few more comments about Dreamland, whom I profiled previously here:

Now the band sounds like they are making Monk’s music their own. It’s in the increasing ease of articulation of the vital and sometimes profound ideas contained in often-hazardous chord changes and rhythmic trip wires.
Trumpeter Jamie Breiwick continues to pursue his Miles Davis-cum-Don Cherry influences, often pushing plummy accents into a slippery swing and, like a master baker, he consistently kneads the thematic material into whole, rounded melodic ideas. As the bandleader, he’s also imaginative and intrepid in delving into the mysterioso depths of the Monk book. Breiwick has an assurance and dedication to the material that I think would’ve made Monk proud, even though he was known as an often-exacting bandleader.

And for my ears, Devin Drobka is an ideal drummer for this music. As a Berklee-trained musician and vibist, he understands the implications of the harmonic changes better than most drummers, which helps keep the music bubbling and percolating with the right aroma and savor. And on some tunes, like “Light Blue,” his drum solo built directly from the harmonic and melodic charms of the melody itself.

On a longer previous solo, Drobka dazzled in quirky wavelengths. I declare that Thelonious Monk himself would’ve danced around his piano (a not-infrequent Monk behavior) in response to Devin’s solo — bristling, sashaying, hiccuping, all amid a push-pull tempo tension. Then he’ll fling out a few fractured march rhythms. But few fractured marchers can also dance, like Devin’s Monk march can.

Pianist Mark Davis is a somewhat more supple and fluent phraser than Monk himself typically was. And yet Davis’ playing leaps and lopes at times, which brings to mind to the magisterially buoyant hard-bop pianist Sonny Clark doing a Monk take. And Davis rarely misses a chance to insert an acerbic Monk accent — often a buzzingly discordant second interval.

Bassist Clay Schaub is relatively new to the band, as a replacement for John Price. But he’s an extremely capable and musical player in negotiating the often-tricky changes.

I see Dreamland staking out their own high ground in the crowded strata of Monk Interpretation. Their intelligence, fearlessness, youth and fire will keep this dreamland afloat, growing and prospering in ways yet to be imagined.

All photos by Kevin Lynch, except as noted.