I’ve said it before and I’ll say it again ‘I love house concerts!’ Seeing a musician of the calibre of Diana Jones play to an audience of thirty fans in the comfort of a private home just can’t be beaten! The Turners Hill House Concert series was celebrating its 50th show and who better to celebrate with than Jones who was making her fifth visit – she has practically become ‘one of the family’.

Jones’ latest album MUSEUM OF APPALACHIA RECORDINGS is a collection of songs that draw on her love and tradition for old time mountain music, a genre she was drawn to, especially after discovering her biological roots (she was adopted). Her adoptive parents were not musical but when Jones met the family of her birth mother, her musician grandfather introduced her to the music he loved and the rest as they say ‘is history’. She has carved out a successful career writing songs about love, death, religion – all motifs found in the music of Appalachia, but she gives them a modern twist that makes them relevant to the 21st century.

Performing solo, without a microphone and alternating between a six string and a tenor guitar she showcased songs from the new album but threw in some more familiar material. She’s completely relaxed in such intimate surroundings and was happy to explain the provenance of many of the songs she sang during the 90 minute set. I love it when this happens as it adds so much more meaning to the material. I know that some singer/songwriters prefer to let the listener make up their own mind but when the songs are so personal it really adds to the level of appreciation when you know how or why the song was written.

Sparrow whose protagonist is a school friend going through a particularly hard time – Jones hid her in a garden shed for a couple of weeks as she helped her escape from an abuser.

Goldmine, which took her ten years to write, is a tribute to her college friend Lucy Grealy whose face was disfigured by childhood cancer. Grealy underwent 39 surgeries, started self-medicating and died of a heroin overdose before she reached her 40th birthday.

Ohio came to her in a dream about someone who had never seen the ocean yet in the song Jones is singing about the suicide of her sister-in-law – death as an escape from extreme pain.

Such personal songs, so poignant and so very moving, all sung with such gracefulness.

Yes Jones writes incredibly sad songs but both she and her audience find a level of comfort in them. She also writes achingly haunting love songs Cracked and Beautiful and Henry Russell’s Last Words which was a joint request from all three members of the host family – Jones couldn’t refuse them could she? She ended the set with The Other Side a song written for her grandmother’s funeral service but about two thirds of the way through she forgot the lyric and exclaimed ‘Oh s*** you’ll just have to buy the CD! Many did – it is a very personal canon of work and could well be her best album yet. Jela Webb 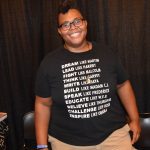 THROUGH THE LENS: Connections and Community at 2022 Folk Alliance International 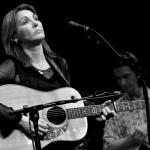