In 1977 I travelled to the U.S. to stay with a pen friend who lived in Downey, California and little did I know then that Downey was the home of what was to become one of the seminal bands of roots-rock – the Blasters. Formed by brothers Phil and Dave Alvin, they would go on to release four studio albums before Dave left in 1986.

Dateline 1985 and the boyfriend who had driven me to the airport in 1977 (by then my husband) attended a Long Ryders gig in Guildford during which he heard, over the PA, an album being played that just blew him away! He found out that it was HARD LINE by the Blasters. We almost always go to gigs together but I was away on a residential course and couldn’t accompany him that night – my loss. As luck would have it the local HMV store had a copy of HARD LINE and as soon as I heard the opening track Trouble Bound I immediately understood why it had made such a big impression on him. I was smitten too!

It took us ages to track down the other Blasters albums – 1981’s BLASTERS and 1983’s NON FICTION and even longer to get a copy of their 1980 debut AMERICAN MUSIC – in fact we had to wait until 1997 when it was re-released on CD with extra tracks.

We first got to see Dave Alvin play live in 1995 when he toured the UK with Tom Russell. They played the now defunct Weavers pub in London. Run by musician Joe Giltrap who booked some great acts during the late 80’s/early 90’s, this was no exception. I always think that the first live show by someone that you’ve been a fan of for a long time, is really special. This one certainly fell into that category.

The original Blasters line up did re-form and played on a steamy summer night in July 2003 at Dingwalls, London. It was so hot and energetic that they almost fainted on stage. Great gig though and fantastic to see the originals perform together, something we thought we would never see.

Dave Alvin returned to London (the Borderline) for a show in 2005 with his Guilty Men and if my memory serves me correctly his long time friend Chris Gaffney played that night as the opener, as well as in Alvin’s band. Wow!

Four years later in 2009 we were in Austin, Texas for SXSW and as luck would have it Dave Alvin was billed to play at a tribute for the late Doug Sahm. Accompanied by Cindy Cashdollar who became one of his Guilty Women, I was disappointed that he only played one song – Sahn’s Dynamite Woman. Short, but nevertheless very sweet.

January 2012 and tonight’s date at the Jazz Café was announced. Ordering tickets, we cancelled what was originally in the diary – there was no way we were going to miss this! Luckily for us, six more UK tour dates were announced and one happened to be very close to home in Brighton. I reviewed that show (see earlier posting) which more than lived up to expectations.

So to London, on a wet Friday evening and the venue filled up nicely for Alvin’s set. Reprising all of the Brighton set-list, this show was longer at two hours and that meant we got to hear three additional songs – Dry River a song about his hometown. Tonight it featured a fabulous extended drum solo by Lisa Pankratz. Johnny Ace Is Dead based on the true story of the R&B singer who met an untimely demise on Christmas Day 1954 when he played a round of Russian roulette. Blackjack David which opened tonight’s proceedings, a traditional folk song to which Alvin put music and released as the title track on his 1998 solo album.

Many of Alvin’s songs are autobiographical and these coupled with the stories he punctuates his set-list with, give an insight into the man, his formative years and how they shaped his love of the blues. He speaks sincerely of family and friends; I think that underneath that ‘cool dude’ exterior lies a warm and likeable man. He bursts into smiles a lot on stage and the rapport between him and ‘the Guilty Ones’ is second to none. Another amazing night!

I don’t know when he will be back in the UK but in the meantime we have the release of the expanded edition of ELEVEN ELEVEN to look forward to. That will just have to keep me going until the next time. Jela Webb 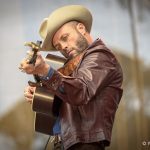