KCRW‘s Jason Bentley introduced Dan Auerbach for last night’s Apogee Sessions (at Bob Clearmountain’s Apogee Studios) by saying, “Please welcome one of the most important musician/ songwriter/producers of our time,” and it was no hyperbole. Auerbach and his friend, Pat McLaughlin, came on to the tiny little stage at Apogee and showed us just why he garners such high praise.

It had been a perfectly gorgeous day in Southern California, and when Auerbach and McLaughlin sat down – and got down – with their first song, “Waiting On A Song” (from Auerbach’s new album of the same title), it was so lilting and lovely, it immediately recalled a summer day sitting on a riverbank watching the clouds drift by. For me, anyway. I dug it right away, as did everyone packed in there so tight you truly couldn’t move.

By way of introducing “King Of A One Horse Town”, Auerbach said that he and McLaughlin had written it together when “We had a fling last summer … it was hot.” He and McLaughlin exchanged looks, and he added, “Nah, not that hot.” They sang of how they “could barely pull my weight around”, and I got it. Some days even that feels like too much. But we persevere … often thanks to music.

“Never In My Wildest Dreams” promises to be this year’s big wedding first dance song, trust me. It’s so beautiful, and absolutely dreamy, I couldn’t help but get choked up. If someone sang you that song – never mind wrote it for you – it would be so on. I instantly got crushes on both of these dudes, as their harmonies wove together a deeply touching love song where the honest lyrics of “Never in my wildest dreams would I be loving you … dreams come true.” The whole joint was in a full on swoon after that one, and hopefully it gave the guys present a mental note to step up their own game. Phew. 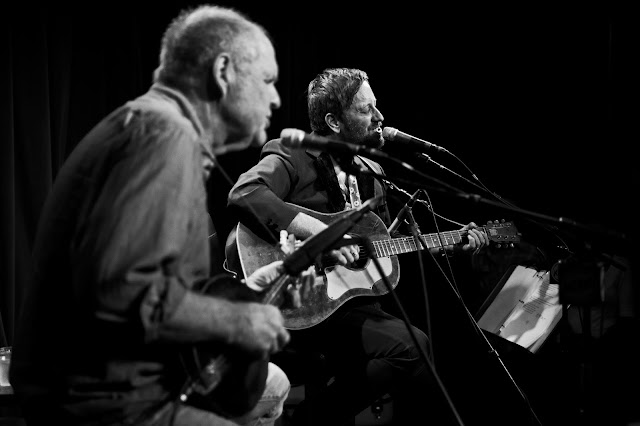 “Livin’ In Sin” featured some serious riffage from both, and McLaughlin’s mandolin really shone. I also like how Auerbach puts his whole body into his playing, really crouching into his guitar and becoming a part of it. These cats are really, truly players’ players … all of which was further illuminated in the interview portion of the evening that came next.  Bentley came back and McLaughlin split to give his chair up for the Q and A. 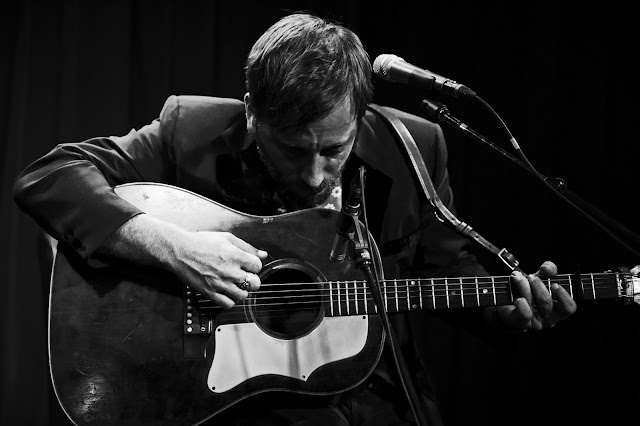 Bentley shared that Auerbach had just written a song in the green room, and had to immediately record it, which is why the whole shebang started a little late. Auerbach cracked that it would be available for sale at the door on the way out … and I wouldn’t be surprised, with how prolific this guy is. Auerbach, though from Akron, Ohio, has made his home in Nashville for the last eight years, and it’s very clear how much he has embraced the legendary music town.  After constant touring for years with The Black Keys, The Arcs, and solo, producing albums for a ton of people (Dr. John, Lana Del Rey, Ray LaMontagne, etc, etc…), he decided to stick around Nashville last summer and just work on writing music. His friend, “Ferg” (David Ferguson) made introductions to all the players and writers around town for him, and before you knew it, he was so inspired he bought a building – a former call center – and turned it into his own studio, Easy Eye Sound.

Easy Eye Sound is now also the name of Auerbach’s own label, to help bring music to the world from people that live in Nashville, and have spent their entire lives being creative. “I feel a connection to music that draws from everything, but isn’t one thing in particular … and that is the Easy Eye Sound.” I love it.  Auerbach told about how when he was recording his new “Shine On Me”, he kept hearing Mark Knopfler’s (Dire Straits) guitar in his head, so got his email and sent him the song. Two days later he sent it back with his guitar part  … “And I’ve still never met him.” That anecdote speaks to how highly Auerbach is respected among his musical peers, and the feeling is mutual. “You pray a song comes along … that’s a bit dramatic, but you want to work with somebody that helps ignite that creative spark.” It seems as though there’s a whole lot of that going on over at Easy Eye Sound these days, and it feels exciting. “I hoped it would happen, and it’s happening. It’s very special,” he said, confirming that. He said he records so much, and employs so many musicians in Nashville that the President of the Musician’s Union pats him on the back when he sees him, saying, “Anything you need.” He ribbed Bentley a bit, saying that they have a recording of Bentley saying, “I can feel the reverberation of your rocking through the walls” from a past KCRW performance that they play on a loop to entertain themselves. In those days, all the players wore big beards and intimidated Bentley, he said. Auerbach laughed, and said, “I’ve never intimidated anyone, it’s empowering.” 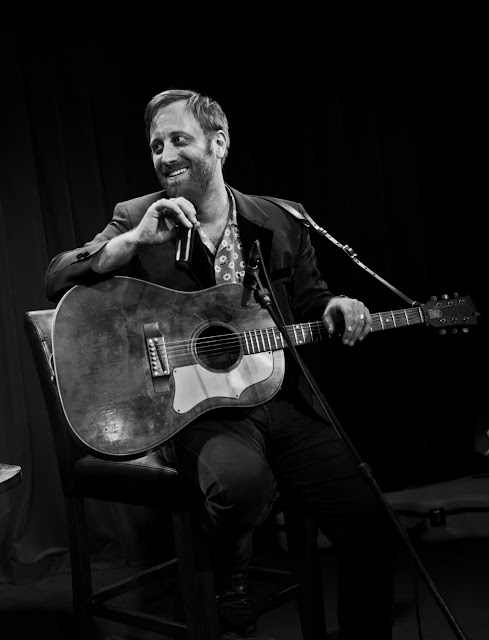 That wrapped up the interview, and McLaughlin returned to help Auerbach further intimidate us all. They kicked off the second set with “Trouble Waits For You”, a jangly, strolling along kind of a song. Again, these players were all the way into it, yet kind enough to take us along with them on this jaunt. “Stand By My Girl” (also off the new Waiting On A Song album), which cracked everyone up when they got to the lyric, “I’m gonna stand by my girl … she’ll kill me if I don’t.” At song’s end, Auerbach joked that “That’s a true story. Sad, but true.” It was again awesome, as was “Trouble Weighs A Ton” from Auerbach’s first solo album, Keep It Hid. It was gorgeous, even though Auerbach had promised “not to be too intimidating” – they still were. “You’ve got a couple miles to go to drive me crazy …” – Auerbach writes great lyrics, man.

“Shine On Me” is the obvious hit, and was again extra- evocative of summertime. I mean, it shouts out to Raybans. I was feeling a bit of a burn on my arms from a day trip along the PCH, so summertime was on my mind, but if it hadn’t been, this song would have done the trick for sure. Blast it, roll down your windows, and enjoy yourselves this summer, friends! With jams like this, you really can’t help it. 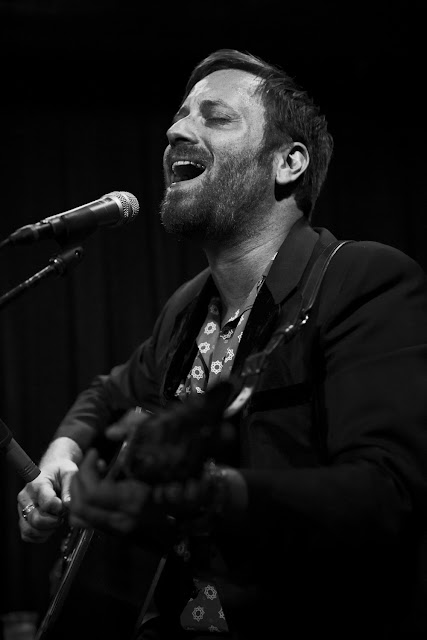 We all clapped wildly, enough to get the guys to jam one more song, which was “Goin’ Home”. The beautiful strumming took me back to the river’s edge, on a lazy day where maybe getting some Countrytime Lemonade would be the tallest order of the day. Wholesome goodness that instantly made you homesick, even if you were home. I almost hitchhiked from this studio to Minnesota when  Auerbach sang, “I spent too long away from home …”, and it hasn’t even been that long. The prominent line from the tune goes, “Be thankful for all you got”, and was so just LOVELY that I again choked up – of course. What a wonderful reminder through song – to indeed be SO, SO thankful for what you got, because if you were here, in this moment, hearing tunes like these, you truly had an awful lot to be grateful for.

With that, it was “So long, hope to see you again soon in some form!” and Auerbach and McLaughlin were off – probably to record another excellent tune backstage. And I was off – to go get Waiting On A Song to help me have an even more beautiful summer. I hope you’ll have the same! Thanks so much to KCRW for putting on yet another fantastic evening of live music. Love you.

Waiting On A Song is available now – everywhere.