ft foot. Last week I couldn’t bear any weight on it at all. As I’ve been able to hold a little more weight on it, I walk with a severe limp, my foot ridiculously angled out 45 degrees. Pain medicine hasn’t touched the soreness much. Prescribed anti-inflammatories have helped some.
But today, I awoke with no pain in my foot whatsoever. What changed, you ask?

I heeded the words of a wise, bearded, longhaired prophet; one who speaks a language of love and acceptance of all…

And I drowned my pain in the Whiskey River.

When I received confirmation of my tickets to the Willie Nelson show at the Pageant in St. Louis at the last minute, I worried about having to stand through an entire concert on my bum foot. And it did hurt. But I left my sorrows and worries at the foot of the old prophet and awakened today, miraculously pain free.

Sure, you could say that maybe the foot was just stiff or had an early bout of arthritis and simply needed to be exercised. Maybe that’s what fixed it. You believe what you want. I prefer to believe in a miracle.

WWWD? What Would Willie Do?

I was excited to finally be able to see one of my music idols. I saw Willie a few years back at Farm Aid, but that was a short set.
What does one say about a Willie Nelson concert? Brotha’s used pretty much the exact same set list since the 70’s. You can always count on a good show. The other thing you can always count on is Willie’s behind-the-beat, never-in-the-pocket phrasing and exquisitely unique guitar work. He didn’t disappoint on either count last night.

At first, the phrasing was a bit confounding. It’s almost impossible to sing along, even to the most familiar songs. The band seemed out of synch during the first song, but I knew that couldn’t be. Willy’s Family is one of the longest running outfits in all of music and notorious for being tick-tight. After a couple of tunes, I realized they weren’t out of synch…it was my ears that were out of synch. We’re so used to the accepted formula of modern music that it took a little getting used to when listening to visionaries like Willie and the Family. I quickly adapted and now I fear that all other music will sound out of synch to these Willie-fied ears.

Every song was familiar. Willie played through his signature tunes (opening with Whiskey River, of course; Blue Eyes Crying In the Rain; Still Is Still Moving To Me; Me & Paul; City of New Orleans; Always On My Mind; On the Road Again; etc.), a set of Kris Kristofferson covers (Help Me Make It Through the Night; Me and Bobby McGee), a Hank Williams tribute set (Jambalaya/On the Bayou; Hey Good Lookin’; Move It On Over; and more), and a medley of classic gospel tunes (I’ll Fly Away, Will the Circle Be Unbroken, etc.). Willie encouraged us to clap along to the gospel numbers and asked the audience to sing along at all the appropriate times throughout the evening. The highlight of the night was a new-ish tune Willie had written called, “Roll Me Up and Smoke Me When I Die”, which was either accidentally – or completely brilliantly – placed right in the midst of the gospel song set.

Willie’s voice isn’t as strong as it once was, but the times he dispensed with the crazy phrasing and truly sang (nearly all of the ballads), he proved he does still have it.

And he told those stories as much through his guitar playing as he did with his words. When the stage lights first came up, a few minutes before the band came out, Willie’s famous guitar, Trigger, was visible, alone on the stage. I had a feeling that if the rest of the show didn’t happen, it would have been worth the drive just to actually lay eyes on Trigger.

Willie’s playing is simply astounding. A blend of country, jazz, Mexican influences, blues, and who knows what else that is staggeringly unique. No effects pedals. Just an old acoustic guitar with nylon strings and holes worn in a top that’s been refurbished countless times over the years. It’s obvious that Willie loves music. If I hadn’t heard it before, it would still be completely obvious that he listens to and deeply studies a wide variety of music in his spare time. (He first turned me on to the legendary Django Reinhardt). Watching Willie play and improvise was like watching a master joyfully try new things, experiment, all the while building a new kind of American musical stew that is all his own recipe. His Spaghetti Western style lead-in to “I Never Cared for You” took my breath away.

There are certain unforgettable iconic images in music; Gene Simmons’ bloody tongue, Pete Townsend’s windmill, Chuck Berry’s duck walk. I’ve never had much use for Gene or his tongue. Pete didn’t die before he got old, if you know what I’m saying. And Chuck’s duck walking days are long behind him. But Willie Nelson taking off his black cowboy hat two songs into his set and strapping a red bandana across his braids is an iconic image I won’t forget. And I defy anyone not to feel a rush of pride as an honorary Texan, even for just a few hours, as the massive Texas flag unfurls behind Willie and the Family during the opening lines of “Whiskey River”.

Johnny Cash and Willie Nelson were the top entries on my “must see” bucket list of concerts. I missed Johnny, but I spent some time with our friend Willie last night.

There was a chance that I was going to be able to interview Willie for my Dirty Roots Radio Show. It ended up not working out, but I’d always heard that Willie took time to meet his fans after the concert. So I drug my wife over to his tour bus, the Honeysuckle Rose, as we left the venue. Willie was whisked away as soon as he left the loading docks; no visiting with anyone. That, of course, was sad; but the hour we hung around the back doors of the Pageant was among my favorite time of the whole evening.

I got to meet Willie’s infamous drummer, the great Paul English. Paul, the inspiration for the classic – and one of my very favorite songs – “Me & Paul” only played drums for two songs last night. He wasn’t moving around very well, as he entered and left the stage. But it’s good to see him out there, still on the road with his crew, still giving it his all. 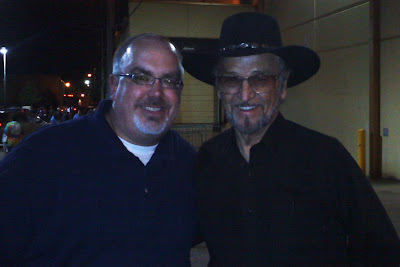 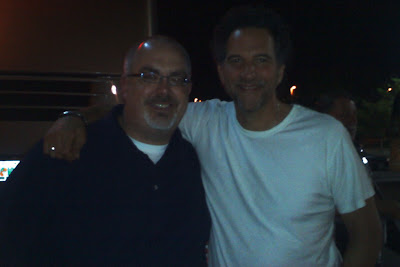 I only noticed one (huge) puff of (ahem…) smoke during the concert; appropriately during the last verse of “Roll Me Up and Smoke Me When I Die”. But outside, hanging around the buses, the smell of doobage was definitely in the air.

We visited with other fans of every stripe; a few old hippie burnouts, a whole bunch of authentic badass Hell’s Angels, young fans, one really drunk lady, other band members, a real cowboy or two, and old folks anxious to meet Willie once again. We met one of the bus drivers and were entertained by the antics of the road crew.

I can’t think of another artist whose backing band I’d be excited to meet, much less whose road crew and bus drivers I’d be excited to meet. But all are welcome at this party. We’re all part of this Family. The life we love is “makin’ music with our friends” and thank God Willie’s (still) on the road again…

Mifflin blogs about music and life at OTIS RYAN PRODUCTIONS 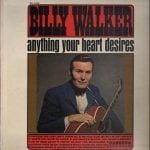 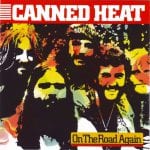