Concert Review: The Dance of The Buffalo Springfield in Santa Barbara, Ca.

For this writer, it’s been a 44 year journey since I last saw The Buffalo Springfield, or didn’t see them I should say. During the summer of 1967 my 12 year-old self stood outside the minor league baseball stadium in Tucson, Arizona as a limousine carrying Neil Young, Richie Furay and Stephen Stills rolled into the venue. I didn’t have tickets and only stood outside but marveled at seeing the three musicians appearing exactly as they did on that first album; Neil in long fringe buckskin, Richie all baby-faced with his Beatle ’65 hair cut and Stephen like a rodeo cowboy with those long blond sideburns holding a cigarette with his arm leaning on the open window.

This time was different. At the Santa Barbara Bowl on June 8th, 2011, I actually saw them on stage. It was a receptive audience for the band of veteran musicians, all in their mid-sixties now with their own musical legacy well-established. Was it to be a concert of nostalgia? Would it be a time for ‘old timers to fondly reminisce? Hardly. The concert and each song was executed with a new found vision and maturity but still just as fresh and alive as nearly a half a century ago. The feeling was playful on stage with Neil dancing and the three forming circles of rhythmic motion conjuring the past into a present day celebration. It was, if anything, the dance of the buffalos; a precious and endangered species. There was the rapport of old friends, though the show was a bit raw – still working out some rough edges around the songs and instrumental arrangements.

After an inspired set by Gillian Welch and David Rawlings dressed in fancy studs and nudie suits, The Springfield came on opening with Richie Furay’s Last Time Around version of Neil Young’s On The Way Home. The set rightly leaned heavily on the first two albums. Buffalo Springfield Again is the album that put them on the rock history map artistically with a blend of country, folk, bluegrass and psychedelic rock that was unique for its time. Hell, it may still be unique for this time as well. It holds up better than most of the period including the much overrated album from The Beatles, Sgt. Pepper’s Lonely Hearts Club Band

Neil Young is the reunion’s, and the tour’s, catalyst and carried much of the dynamics of the show. When it came time to rock the house, it was Neil who danced the stage prodding Stills into more intense solos, joked with the audience and his band mates calling Stills “Blue Squirrel” and Richie fittingly, “Flying Squirrel. He referred to himself as the “Lame Squirrel.”

The breakout moments in the show came with Mr. Soul, which sounded all the better for its ragged power and For What It’s Worth, which was turned into a moving sing-along.

Of the three musicians, Stills seems to have worn down in his playing, singing and performing skills. His voice has weakened which has made his softer and higher end tones harder to reach. Bluebird suffered live by comparison with the familiar recording (one of the few songs that did), but the lead guitar duel between Stills and Young was always the showpiece of their early shows. In the old days this was a battle of lead guitar showmanship. This time it was a sonic flight between two aging eagles who had no intention of coming down.

I found the strength of the material they wrote and recorded over 40 years ago remarkable. With one exception, Neil’s closing, Keep on Rockin’ in the Free World, the entire evening was culled from their three albums. The songs provided a strong, well-paced show with soft country ballads, hard rocking show stoppers and familiar songs of the era. Each member had moments to shine with Stephen belting out a gravely and bluesy Hot Dusty Roads, Neil’s rarely heard, Broken Arrow, and Richie still in strong voice on the classic, Sad Memory, hitting the highest notes with clarity and soul. The collaborative nature of the band was also in evidence as Richie and Neil traded lead vocals on Nowadays Clancy Can’t Even Sing. When Richie sang his perhaps best known song, Kind Woman, the sound of his voice with Neil’s piano was a moment of sheer beauty. Stills showed up on piano in support of Neil on Broken Arrow.

One omission in the evening was the lack of acknowledgement of the missing members, drummer, Dewey Martin and bassist, Bruce Palmer, who died in 2009 and 2004, respectively. They both added tremendously to the original band and had the least success. However, replacements Joe Vitale on drums and Rick Rosas on bass, served the band well during the show.

Most noteworthy of all is how relevant the Buffalo Springfield still sounds today. There was hardly a trace of nostalgia about the evening. It wasn’t an ‘oldies’ show as much as it was a time to pay tribute to the timelessness of great music and those who created it. As a band Buffalo Springfield never received this much adoration and acclaim during their brief tenure. The fact that these songs all came from musicians in their early twenties, in a period of less than two years makes the evenings performance all the more remarkable in vision and scope.

Much credit must be given to Neil Young for making this happen. Without him, it most likely wouldn’t have come to be. But, I consider it an act of redemption that the one member, who created so much instability in the band 40 years ago and went on to become the most successful., is now the one brings them together on stage to receive well-deserved appreciation from the generations who have enjoyed the timelessness, durability and inspiration of what they created so long ago. 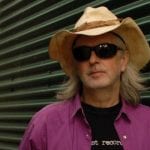 Gurf Morlix Talks about “Eatin’ At Me” and Much More 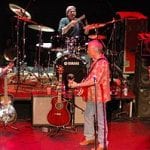