Back in 2009 we met up with First Aid Kit when they supported Fanfarlo at the small Hanbury Arms venue in Brighton. At the time the sisters from Sweden, Johanna and Klara Söderberg had only released one mini album and had become an unlikely Youtube hit with their outstanding cover of Fleet Foxes’ Tiger Mountain Peasant Song. Aged just 18 and 16 at the time, playing just acoustic guitar and keyboards they provided one of the best support slots we will ever see; confident and perfectly showcasing their sumptuous, country tinged harmonies, writes Neonfiller’s Joe Lepper.

Clearly we were not the only ones to be impressed. Since then they have become one of the most respected and popular bands treading the world’s stages and have produced two more albums, including this year’s excellent Lion’s Roar. Now the venues they play are far larger and it was with no surprise to see the 1,600 capacity Bristol O2 Academy packed out to see them.

Despite their increasing popularity and an expanded, more dramatic portfolio of songs, as well as being accompanied by drums, they proved at heart the same two young sisters that played in front of the 100 or so people in Brighton three years ago.

It takes some skill to make a venue this size feel intimate but it was a trick they pulled off well, filling the gaps between songs with engaging banter, including an endearingly tongue in cheek plug for the crowd to fill their Christmas stockings with the deluxe version of Lion’s Roar.

They also daringly declared they would “abandon technology” including microphones to provide one of the high points of their set, a totally acoustic version version of Ghost Town, from their debut full length album Big Black and Blue. It was an electrifying performance with the crowd obediently joining in with the chorus and staying quiet in the verse, where only the sisters’ voices, soft guitar and the hum of the lights could be heard. 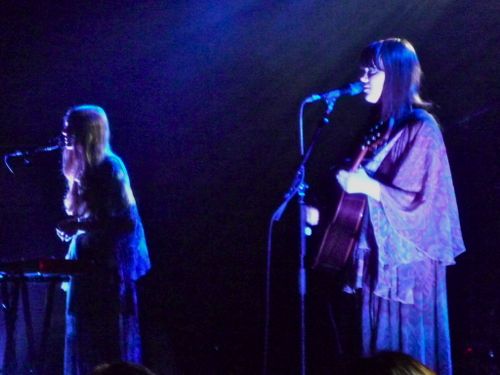 Understandably, it was Lion’s Roar that dominated the set, with tracks such as Blue, Emmy Lou and To A Poet particularly standing out as Johanna and Klara, dressed in long flowing vintage dresses, floated around the stage.

Among the surprises were the night’s two cover versions. Not Tiger Mountain Peasant Song, but instead a breathtaking version of Simon and Garfunkel’s America, which they performed in front of Paul Simon at the Polar Music Prize Ceremony in Stockholm earlier this year. Their other cover was a tender version of Fever Ray’s When I Grow Up, a great choice for Klara to take lead vocals on as she is still only 19.

It’s hard to fault the performance, but if there was one caveat to add it’s that there is now scope with their music to add more instruments to their live set. While Johanna’s keyboards fill out the sound well enough, on final track in the encore King of the World from Lion’s Roar, the performance would have been even better with the recorded version’s trumpets and violins. Given their engaging stage presence and extraordinary vocal skills there’s no danger that such a move would destroy the sense of intimacy they created here  and the far larger venues that will surely be filled on future tours.

Keeping It In The Family Pt 3 – The Sibling Acts