Carolyn Mark is my new hero. I’d never seen her live before she and NQ Arbuckle played a double, actually triple, bill at the Dakota Tavern in Toronto on Thursday, October 22. The Dakota is exactly the kind of place you want to see this show. Its like a dusty Texas saloon, only downtown in a major metropolis. The capacity is maybe 200, and it was only two-thirds full that night, the second night of their CD release party for Let’s Just Stay Here.

The show started with the Vancouver-based Mark doing a few solo tracks with a drummer. She strutted around the stage with her guitar, posed for the photographers, flirted with the crowd, and showed her gregarious personality. She played four of her own songs including “Pirate and Shotgun” and “Not a Doll,” before NQ Arbuckle joined her on stage to be her backing band. They played six more of Mark’s originals including “Fuzzy Slippers,” “Chumpville,” “North Country Fair,” “Don’t Come Over Baby,” and “2 Days Smug and Sober.” Mark and NQ Arbuckle lead singer Neville Quinlan exchanged hysterical stage banter. This fantastic opening act was just a hint of what was to come.

I ran into Mark in the washroom between sets and I told her that I thought she ruled. She was so happy and smiley and appreciative. Definitely my new favorite female performer. 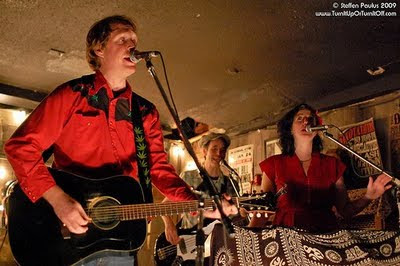 After a short break, Mark and NQ Arbuckle took the stage together to perform all of Let’s Just Stay Here in order. Quinlan took the centre mic while Mark switched between keyboards, guitar, tambourine, and cowbell. They sounded fantastic. Quinlan and Mark’s voices blend remarkably well. And they were having so much fun on stage! In their cover of Justin Rutledge’s “Too Sober to Sleep,” Quinlan changed the lyrics to “And I’m too drunk to drive,” which made me giggle. He also gave a shout-out to the now defunct Edmonton-based band Jr. Gone Wild before performing a rocking cover of their song “Downtime.” This was the first time that I heard the new album in its entirety, and it sounded great. It may crack my top ten this year. 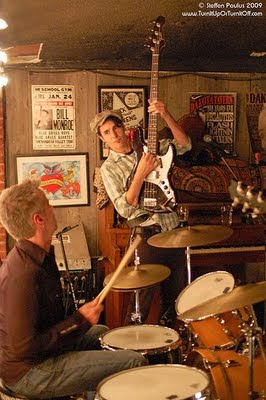 Lastly, Toronto-based NQ Arbuckle performed some their original songs. Unfortunately, by this time is was after midnight on a school night and about 1/3 of the patrons left after the second set. Fortunately for me and others, this left us more room for dancing and getting up close to the stage.

Being a home-town band, NQ Arbuckle had dozens of very knowledgeable fans in the crowd, and many of their song evoked mass singalongs. 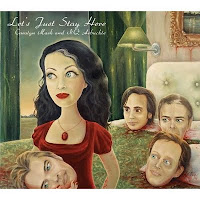 They played 13 songs spanning all three of their albums including fan-favorites “In Another Time” from Hanging the Battle-Scarred Pinata (2002), “Cheap Town” and “Goodnight Irene” from Last Supper in a Cheap Town (2005), and “Marco Polo” and “Don’t Remember Me” from XOK (2008). Mark joined them on stage for “Fireworks,” a song they did for Mark’s 2005 album of duets called Just Married. When she wasn’t performing, Mark danced with the audience and even hugged a few fans. Everyone was having a blast.

All photos by Steffen from Turn it Up or Turn it Off Photography. Scan of the Carolyn Mark sticker from my crappy HP 3-in-one.