I fell immediately in love with this Boulder, Colorado based Monocle Band last year sometime right before Couch By Couchwest and reached out to them to please join us with a submission which they promptly did with the song ‘Can’t Get By’(see below) so needless to say I’ve waited anxiously for their debut album.

Released October 15th Monocle’s eleven song debut is all I hoped for and more. Monica’s magical voice soars with sweeping fiddle and strings like fresh, crisp mile high mountain air. Backed  by exceptional musicians Monica’s vocals shine and surprise with her beautiful depth and range, do I sound like I’m swooning? Well yeah I am. Hitting the mark between traditional folk/bluegrass and something new and unique destined to see them rise on the national scene.
A native of Colorado Springs, bandleader and namesake Monica Whittington has been singing for most of her life. Drawing inspiration from her musical family, she has a deep history in choral singing that precedes her foray into the world of original music.
Bill Huston, Monocle’s second primary songwriter, is a veteran of several bands in California and Colorado and has studied jazz guitar with some of the most noted teachers in the country, including front range legend Dale Bruning.
Upright bassist Eric Wiggs, the recipient of a master’s degree in jazz guitar from CU Boulder, is a musical omnivore who makes his living as a freelance guitarist, bassist, singer, and music educator. He plays in several notable Colorado bands including The Fever and Casse Taylor and the Soul Cavalry.
Drummer Josh Moore has studied jazz performance at the University of North Texas and currently plays in Indian jazz fusion group the Aakash Mittal Quartet and a Denver-based hip-hop band as well as several modern jazz bands.
The album also features Grammy-winner Sally Van Meter on lap steel guitar
Track List: 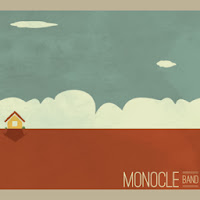