A friend in Seattle told me she’d seen Kasey Chambers Sunday night, and she was amaazing.

Then another buddy, who told me he’d seen her years before (and even bummed a cigarette from her at the break)  told me he was getting ready to see her at the Rio in Santa Cruz on Wednesday.

But me, I’d never seen Kasey live, so it was a treat to catch her at Slim’s, the venerable South of Market San Francisco joint founded by Boz Scaggs awhile back. The gig had originally been scheduled for the Fillmore and I’m figuring didn’t sell enough tickets, but it made more sense for her to be in the intimate room, hallowed ground where I’ve seen the likes of Ricki Lee Jones and Buddy Guy in the past.

Sarah Jarosz, who could easily headline a show on her own merits, opened, yielding the stage to “the beautiful Kasey Chambers,” but not before impressing with a set that included a lovely rendition of Joanna Newsom’s “The Book of Right On” (she said she learned the tune from Crooked Still’s Aiothe O’Donovan.) Cellist Nathaniel Smith and violinist Alex Hargreaves provided sensitive, jazzy accompaniment for the dazzling trio.

Then it was Kasey’s turn, and she owned the stage.

From signature standards like “Pretty Enough,” which she reprised later in a bluegrass version (complete with riffs from “Stayin’Alive” and “Video Killed The  Radio Star”) aimed at Aussies who might not be hard-core country lovers, her piercing, neo-Appalachian outback sound filled the room.

Backed up by her dad, the cowboy-hatted  pedal steel playing Bill Chambers (a former “fox hunter,” she informed the crowd), and fiddler/backup vocalist Ashleigh Dallas, Chambers moved through her repertoire, from “Beautiful Mess” to a lovely new song about the birth of the baby Jesus (“Sample lyric: Joseph was a bit confused, the rest of us were, too,” and a hard rocking version of “Barricades and Brickwalls” that wouldn’t be mistaken for a folk song. And she did a lovely job with “The Captain,” a tune she wrote when she was 17 and said she has performed at every professional show since. Not to mention a cover of Lucinda Williams’ “Happy Woman Blues” (“I could play Lucinda all week“) from her latest cd, “Storybook.”

But perhaps the surprise of the night was “Where Do I Come From,” a duet between Bill and Kasey  that could easily top the charts of No Depression’s “father/daughter song” discussion group. Originally  part of a now out of print collection from “Poppa Bill and the Little Hillbillies,” Bill’s whiskey tenor is the perfect  complement to Kasey’s soulful twang.

Check it out, and see if it doesn’t bring a tear to your eye, and a smile to your face.

Talent, it seems, runs in the family 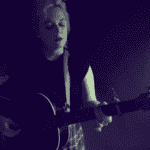 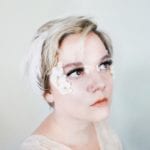