The mention of new bands hailing from Brooklyn in 2013 is likely to conjure a variety of sounds and styles in your mind, but you’ll be forgiven for failing to place deeply earnest, majestically crafted “country-soul” at the top of the list. Fortunately, that’s exactly what you’ll discover when you give yourself over to the sublimely resonant songs of Brooklyn trio The Lone Bellow.

The trio (lead vocalist and principal songwriter Zach Williams, mandolin player and singer Kanene Pipkin, and singer-guitarist Brian Elmquist) proudly describe their origins as “Brooklyn by way of south of the Mason-Dixon line,” each hailing from a different southern town. Originally formed by Williams as a solo act under the name Zach Williams and the Bellow, the group became an entity with undeniable promise and artistic merit once the three friends joined together in Brooklyn. The songs themselves are emotionally fulfilling glimpses of heartache and triumph rooted in the trials and tribulations endured by individuals and couples through every phase of union, separation, commitment, and soul-searching. They are inward-looking gemstones that carry a mesmerizing aura as their central magnetism is offered outward with a lavish sheen and certain comfort.

Producer Charlie Peacock (The Civil Wars) had no small hand in producing the captivating beauty that hangs in the air throughout the eleven songs, but the exceptional talents that come through on The Lone Bellow were already in place before the trio entered New York’s Rockwood Music Hall to record the songs. The occasional cynic may point to the production of Peacock, The Lone Bellow’s opportunity to open a string of dates for The Civil Wars in late 2012, or the comparisons to The Lumineers and Mumford & Sons as a calculated ploy to jump onto a genre bandwagon that is seemingly picking up tens of thousands of passengers by the month. There’s little denying The Lone Bellow are perfectly positioned for a mammoth year with their self-titled debut (They’ve already been singled out as one of the can’t-miss acts of 2013 by the likes of The New York Times, USA Today, Esquire, and Paste in the first five weeks of the year.), but the inspiration for these songs predates the surprising chart dominance of each of those acts.

The dense emotional core at the heart of Williams’ lyrics originated several years ago when his newlywed wife suffered a tragic fall while horseback riding that rendered her temporarily paralyzed. It was the overwhelming gravity and harrowing uncertainty of that event and the years of his young life which have followed that informed the themes of The Lone Bellow’s songwriting and led to the necessity to produce this music. What you are likely to hear upon listening to The Lone Bellow’s debut are universal themes of doubt, despair, hope, and triumph that come with the cyclical nature of relationships. Love, grief, and spirituality are the fibers at the core of this equally delicate and boisterous garment, and credit The Lone Bellow’s sharp sensibilities for allowing them to influence one another as they are known to do in life. Although there are other acts currently enjoying tremendous success by touching on similar musical footing and themes, The Lone Bellow traverse territory that is more like-minded to such contemporaries as opposed to any stereotypical Brooklyn outfits, but the effects are of a sound and style that becomes wholly unique to them in deeper listens. 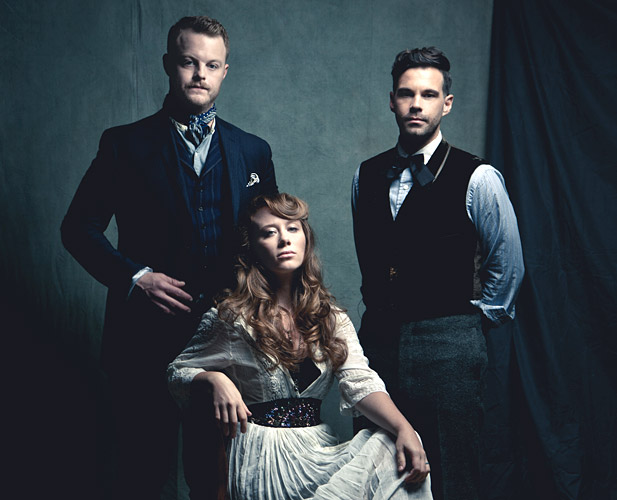 For what it’s worth, though glimpses of many contemporary acts come through when listening to The Lone Bellow, the Mumford & Sons one doesn’t hold water with this reviewer.  The Lumineers and The Civil Wars comparisons shall be rampant and are certainly apt, but The Lone Bellow embrace a sound that harkens to even lusher tapestries than most Lumineers sing-alongs, and the unassailable three-part harmonies of their country-soul are overtly ornate and carry more gravitas than most offerings on Barton Hollow. The intention of such a statement is certainly not to lessen any of the grand achievements of those bands; the point is instead to highlight crucial points of differentiation in the event The Lone Bellow are mistakenly characterized as bandwagon jumpers.

The Lone Bellow – “You Never Need Nobody”

The upbeat country of “You Don’t Love Me Like You Used To” has more in common with a Dolly Parton or Loretta Lynn staple, while strong cases for kinship to equally excellent, but lesser-mentioned, acts like The Head and The Heart (“Green Eyes and A Heart of Gold”), The Low Anthem (“Tree to Grow,” “You Can Be All Kinds of Emotional”), Dawes (“Teach Me To Know”), and The Swell Season (“Looking for You”). Any way you slice it though, the glimpses of other acts that provide the initial comfort in the introduction to The Lone Bellow quickly dissolve into a singular achievement on the strength of the trio’s lyrical depth, craftsmanship, and glorious three-part harmonies.

The chorus of “Green Eyes and A Heart of Gold” is a poignant testament to the power of optimism in the face of daily hardship (“Green eyes and a heart of gold / All the money’s gone and the house is cold / And it’s alright, it’s alright, it’s alright, it’s alright”), while Williams reaches an emotional depth precious few can tap into on “Tree to Grow”: “I’ll never leave, I’ll always stay / I swear on all that I keep safe / A tree I’ll grow, to let you know / My love is older than my soul.” Time and again, The Lone Bellow enrapture with choruses on par with a spiritual cleansing and hard-won transcendence, but the most unassuming lyrics and graceful instrumental strokes within these eleven songs wield a triumphant power to do the same.

Albums – debut or otherwise- as tremendous as The Lone Bellow’s self-titled effort are rare creations with the power to stop you dead in your tracks on first listen and incite celebration on future listens for years to come. The Lone Bellow have perfected a style on their first attempt, and the result is a fully realized work of eleven songs of such immense beauty and lasting grace that it’s impossible to single out favorites. It’s difficult not to single out a soaring tune of belted-out gospel harmonies and supreme blues-country backing on the sung-to-the-heavens ballad “You Never Need Nobody,” but doing so would render it impossible to make equal cases for passionately rollicking tunes like “Green Eyes and A Heart of Gold” or “The One You Should’ve Let Go,” each of which towers alongside the catalogs of Fleetwood Mac and Richard and Linda Thompson as much as they are akin to any recent genre entries.

In a time when folk-leaning music with genteel country flair is enjoying as much mainstream success as any other genre, it’s quite easy to tag new bands with kindred spirits as mere imitators. To do so with The Lone Bellow would be a grave mistake. The success of the hit ABC series Nashville is telling of the perks of capitalizing on a trend. Though the music and atmosphere that permeate the acclaimed prime time soap opera aren’t mutually exclusive from the music of The Lone Bellow, in reality, a baker, a waiter, and a church music director from Brooklyn have turned similar inspiration into enduring art with genuine heart and heartache where lesser creations settle for mere melodrama.

For this reviewer, the musical strengths that shift the dial towards favorite music as opposed to impressive, but fleetingly enjoyable, works are those of breathtaking lyrics, melody, craftsmanship, and potential for enjoyment well into the future. The Lone Bellow possess each of those strengths in vast amounts, and the proof rests in every song their triumphant debut.

*The Lone Bellow’s eponymous debut album is out now on Descendant Records.
**The post was originally featured on The Silver Tongue on February 4, 2013.

Justin works as a content producer for ChaCha in Indianapolis during the day. He got his start writing music pieces with Laundromatinee in Indianapolis, where he still makes featured contributions. Justin resides in Noblesville, IN, and his personal blog, Division St. Harmony, can be found at www.divisionstharmony.tumblr.com. His first loves in music have long been The Clash, Dylan, The Beatles, The Rolling Stones, Tom Waits, Tom Petty and Bruce Springsteen. His personal tastes are fairly broad and include garage, indie rock, classic rock, Americana, roots, outlaw and classic country, punk, blues, rhythm and blues and soul. He takes pride in an affinity for writing and music that is both rich in head and heart. Justin welcomes you to follow him on Twitter at @clashrebel and on Facebook.