The Delta Saints know a thing or two about how to market their sound and personalities. They do exactly that right up front in their bio. On the band’s Facebook page, the Nashville five-piece announce their interests to be “Women, Whiskey and Woes,” while their influences are summed up with “Dames. Working hard. Playing harder.” Under “Artists we also like,” The Delta Saints say, “You name it, we love it.”

Those coming into the band’s debut full-length album armed with that knowledge are likely to be either cynics who view such a bio as hackneyed and reductive, or they’ll be eager audiences invigorated by a band with a like-minded worldview. Admittedly, I’m very much in the latter camp, and I find the workmanlike attitude and lack of irony in the band’s influences to be quite refreshing. When The Delta Saints’ songs support those very interests and influences – even if they aren’t willing to be tied down to a certain genre or specifically name-check the trendy touchstones most other bands do in press releases – it’s easy to embrace the notion of a modest band striving to be accessible.

The band is comprised of Ben Ringel (vocals/dobro), Dylan Fitch (guitar), David Supica (bass), Ben Azzi (drums) and Steven Hanner (harmonica), and they wear their “You name it, we love it” attitude as an informing badge of honor on the debut album, Death Letter Jubilee. Brandishing a sound they coin as “boubon-fueled Bayou rock,” The Delta Saints play a melting pot of blues, folk, country, gospel and roadhouse rock and roll that wears its blue-collar, Prohibition Era attitude on its sleeve but refuses to settle for kitschy revivalism. 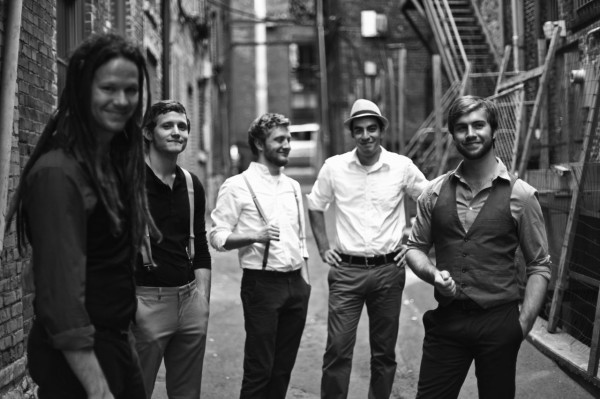 Rather than sounding like yet another serious, method-acting Americana band ducking out of the costume department of a small-budget period film irrationally concerned with continuity, The Delta Saints embrace the period garb and traditions without working inside detailed arthouse limitations. The songs on Death Letter Jubilee aren’t remotely interested in being fact-checked for authenticity and accurate period details in their co-opting of gospel and Delta blues traditions, and we’re all the better for it as an audience. There are plenty of stringent revisionists making fantastic music right now that earnestly evokes antiquated times. Death Letter Jubilee is more concerned with you building up a sweat making your legs shaking how they’re known to do down south. The Delta Saints’ impassioned rock and roll songs take delight in being anachronistic while simultaneously dipping into several genres.

The Saints are a rollicking locomotive that makes fantastic use of all its freshly oiled working parts in the creation of a wonderfully humid atmosphere primed for whiskey shots, dollars in jukebox slots, drunken carousing, and future redemption. Supica and Azzi are a forceful tandem driving the rhythms between steady, sexy grooves and thunderous clamor. Hanner injects the frenzied Southern color into the proceedings with rambunctious harmonica riffs flanked by Bayou brass and frequent hand-claps and stomps. Fitch’s guitar is a revelation throughout the album, his bluesy licks routinely harking to Stevie Ray and Double Trouble far more than any sort of early twentieth century influences that inform so many of the more pastoral roots and Americana acts that strive for the accurate period ambiance. Ringel slings a mean dobro that kicks dust up all over Death Letter Jubilee in the company of Fitch’s riffs (see: “Boogie” and the hangman’s death march of “Jezebel”), but it’s Ringel’s growls and Southern punk howls that flesh out the sound of The Delta Saints into a red-blooded, undeniably modern rock and roll machine even while incorporating lyrics and atmospheric touches that beckon old ghosts.

Death Letter Jubilee at its heart is a damn fine front-to-back collection of exceptionally tight rock and roll filled with dirty drunken soul and bouncy, NOLA-indebted mirth. The rock and roll is The Delta Saints’ tried-and-true brew when they step up to the bar, but they knock back shots of gospel (the R&B soul interlude “River,” singing “go down to the river and pray”), Delta blues, and even Spaghetti Western to round out the bourbon-drunk walks of life. The album is a work of intoxicating, earned release, like the mechanic at the end of the bar nodding along to the juke on his stool, all the while taking down his third pint as he takes drags with grease-stained fingers. Or maybe it’s the couple letting loose in the middle of the dive, dancing to the riffs and rhythm thundering from the speakers with zero self-consciousness with respect to whichever patrons are watching..

Such release is perhaps best expressed in Death Letter Jubilee’s thrilling title track. After a promising opener with “Liar” and a mighty track two of “Chicago,” a monster blues howler that simmers and burns to atmospheric perfection with all the right scrappy bells and whistles, The Delta Saints let rip their finest moment in an album packed with winners on “Death Letter Jubilee.” Easing in with bouncing bass line and a solid guitar lead, Ringel chimes in on what starts as a pensive and dark meditation: “And I’ve got a long way to go/  In this room shall I grow / But my time is well worth your pain /  Because one day I’m gonna stand over your grave.” On a dime, The Saints uncock every pistol in their company and deliver a delirious frenzy of loose-limbed soul and absolute exaltation. The chorus is a riot of unabashed glee as Ringel sings, “And I’m gonna dance! And I’m gonna sing! And I’m gonna lift my voice! In a death letter jubilee!” It’s expertly organized and produced mass chaos: Ringel howls in the foreground with the support of gospel call-and-response in the background, Hanner’s harmonica dances all around the periphery and dives in and out of the blast coordinates, Fitch blazes through and amplifies the destruction with a furious barroom brawler of a riff, all the while Supica and Azzi pound out the rhythmic mayhem that keeps the riot from spilling out into the streets and pillaging the whole damn neighborhood.

The tremendous chorus of “Death Letter Jubilee” is the sound of a raging locomotive careening off the tracks and laying waste to every body who tries to stand in the way of this euphoric funeral procession. “Death Letter Jubilee” is a total blast of unadulterated vitality, and a lesser band would let such chaos deteriorate into an unsalvageable mess. The Delta Saints, though, are no average bar band. What these Saints pull off over four minutes of “Death Letter Jubilee” is practically miraculous. It’s one of the best songs of this young year, and it’s the brightest star on an album that’s far stronger than most debut records have any right to be.

On their first swing in the big leagues, The Delta Saints have launched a 500-feet blast into the cheap seats for fans of delightfully intoxicated rock and roll and charming Southern soul. Here’s to getting a little down and dirty after all the hard work.

**This post was originally featured on The Silver Tongue on February 2, 2013.