The new album from Boston’s Ten Foot Polecats ‘Undertow’ is gonna drag you out to the woodshed and kick your ass,  a mixture of deep Mississippi mud, Chicago grit, Texas twang with flashes of San Fran psych layered as thick as the Boston molasses flood.

‘Undertow’ Kicks off like fast moving freight train barreling down the tracks, with its smokestack spewing fire and sparks, geetar licks churning like steel wheels and harp hollowing like an unholy whistle, hold the hell on it’s gonna be a bare knuckle ride. Jim’s stellar guitar dexterity packs a wallop to every song,  Singer Jay Scheffler’s  diverse vocals and harp add distinct style flavors to each song from raw blues to countrified rocker, tying it all together are  Chad Rousseau’s unswerving beats on the skins like the steam engine stoker shoveling coal into the furnace keeping it full steam ahead. 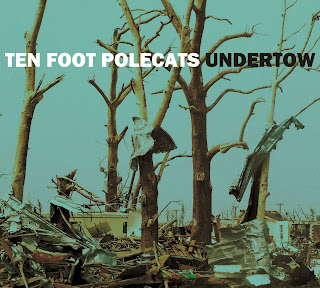 Track List:
Do That Thing
Lost at Sea
Out In The Rain
Worried Sick
Undertow
Prescription
Moonshine and Mud
All Over Again
Shibble
Leave Well Enough Alone
Someday (Your Pain Is Gonna End)
Release date: April 23, 2013 At that time you will be able to find the album on Amazon, iTunes, Rhapsody, and every known download site in the world. You can Pre-Order now
Learn how to place music on itunes at ReverbNation.com