Conflict about musical direction, song choices and album themes, can be a destructive influence for some bands, write’s Neonfiller.com’s Joe Lepper. Fortunately for Southern Tenant Folk Union, the Edinburgh based collective that loosely falls under the folk/bluegrass banner, the opposite has happened; as pre- production disharmony has conspired to create one of their best albums.

Originally conceived by Southern Tenant Folk Union’s film-score-loving banjo player Pat McGarvey as an album focusing on horror, this theme ended up being pulled apart ahead of recording as the members own ideas tussled for attention.

It was a pre-production process that McGarvey admits created ”some disharmony, especially in the whole voting process.” However, he adds “when we got into the studio to record the atmosphere was actually pretty good and positive, it was just the pre-production that sucked.”

The band’s traditional technique of recording and playing live huddled around a single mic helps foster such unity and the end result is an album that is eclectic without losing cohesion and succeeds in once again for the band takes the folk and bluegrass genres to new levels.

The horror theme still courses through many of the tracks, particularly on McGarvey’s Chest Freezer, a post apocalyptic tale of a liar bragging to the body parts he keeps hidden away.

Crash is another to stick to the cinematic horror theme, with its five string banjo dampened to sound like the Moog 960 module used by Tangerine Dream in the 1970s and many a film score. It even sounds like the theme to 1980s show Night Rider at times, but don’t let that comparison put you off, this track pushes the boundaries of roots music in directions few others are attempting in the UK. 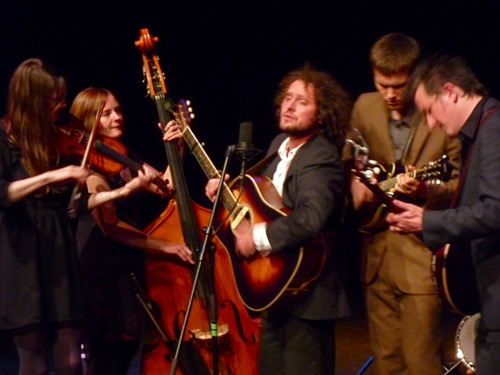 Alongside such horror film sounds sits flashes of more traditional folk, giving an indication of the collective’s differing views. This is particularly the case on the upbeat Men in Robes and Guitarist Chris Purcell’s vocals on Relic Of a Reasonable Mind, which drifts into the folk balladry territory of say a Nick Drake.

Even though the original concept of a horror themed album was pulled this way and that, as McGarvey says: “The fact of having a starting point at all did, I think, give it more of a focus than if we hadn’t begun with one.” Vocalist Carrie Thomas’s traditional folk singing on  Days By the Seaside With Ice Cream, the Donald Ker poem about a family murder from the children’s perspective, appears a good example of how both the horror theme and band’s folk music roots remained intact and intertwined well during production.

Southern Tenant Folk Union’s previous album Pencaitland explored similar musical themes of pushing the boundaries of roots genres. On Hello Cold, Goodbye Sun they have taken this mission to the next level and shown that the collective is as strong as ever, even if they do not always agree. It is no wonder that we included them in our Top Ten Bands To Watch Out For in 2013 list and even though the year is a few days old I’d be surprised if this album, their fifth to date, doesn’t figure in our next annual Top 20 Albums list.